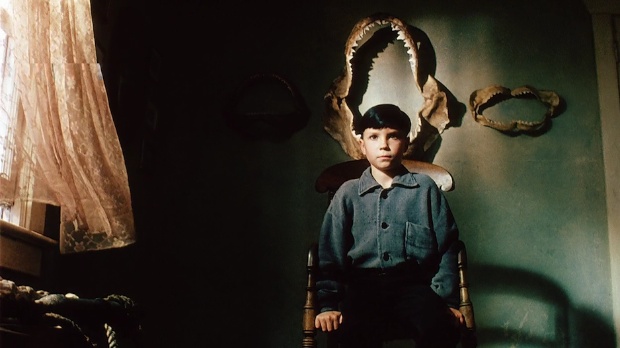 “It’s all so horrible, isn’t it? The nightmare of childhood. And it only gets worse.”

The prairie is a paradox: a place of bounty and scarcity, virility and decay, the sublime and the surreal. You can see this in the juxtaposition of lush landscape paintings depicting thick wheat fields, warm sunsets and quaint farmhouses, with black-and-white photos of massive dust storms, crops decimated by grasshoppers and hollow-eyed farmers. For every grain elevator that rises stoically into the sky, there are a hundred abandoned farmhouses sinking into the soil. Nature, as indifferent as it is, can seem both nurturing and cruel. And therein sprouts the kernel of madness.

Having grown up on the prairies of Alberta (in and around the northern city of Edmonton), I’ve always felt that schizophrenic relationship to the landscape. Once you get out to where dirt roads are lined with rusted barbed wire and the wind-whipped barns start their death-lean, there’s mystery, danger, and the sense that anything can erode here, particularly your sanity.

No film has so fully explored the horrific possibilities of this place as The Reflecting Skin by Philip Ridley. The obscure 1990 feature takes the prairie gothic aesthetic made famous in paintings by the likes of Edward Hopper (House by the Railroad, 1925) and Andrew Wyeth (Christina’s World, 1948) and renders it into a surreal world where delirium is the inevitable harvest of a place sowed with predators, cruelty, and the grotesque.

Wide-eyed Jeremy Cooper stars as Seth Dove, an eight-year-old growing up in post-WWII Idaho. The film opens with him cutting through a golden wheat field as he brings a huge toad to his friends, Kim and Eben. The Norman Rockwell tableau turns hideous when Seth sticks a reed in the creature’s anus and inflates it, leaving it on its back in the middle of a dirt path. The boys hide and wait for a woman in black to walk by and look at the toad. Seth uses his slingshot to explode it all over her. Blood drips from her horrified face as the boys escape.

Seth returns home to a weather-beaten house, a yard full of decaying farm equipment and cars, and a ramshackle garage with gas pumps. The building’s signage has partially collapsed, so what once read “Dove Garage” now reads “Dove rage”—a hint of things to come. Dove patriarch Luke (Duncan Fraser) lounges on a broken couch, reading pulp fiction about a prairie vampire. The bloodsucker on the cover—a pale, blonde woman in black—resembles the bloodied prank victim, Dolphin Blue (Lindsay Duncan).

When Seth’s hysterical mother, Ruth (Sheila Moore), finds out about what happened, she sends the boy over to Dolphin’s house to apologize. In one of the movie’s most bizarre scenes, Seth sits in a room full of shark jaws, whale bones, and mounted fish, cradling a harpoon as the widow explains how her husband, who came from a family of whalers, hung himself in the barn a week after they were married. She opens a box of keepsakes that includes the dead man’s glasses, a lock of his hair, and a tooth—all while bemoaning her fate and terrifying Seth with proclamations such as, “Sometimes terrible things happen quite naturally.” He runs away, convinced that she’s a vampire. From here, the boy’s innocence isn’t so much lost as torn out of him by the human monsters and monstrosity that surround him.

Soon, Seth discovers Eben’s body floating in their well (water, drinking, bursting, and being drained are reoccurring motifs throughout). The police suspect Luke, who years earlier was caught kissing a seventeen-year-old boy. The real killers, however, appear to be four greasers who cruise the back roads in a giant black Cadillac that glides with the predatory menace of a steel shark (one that drinks gas at the Dove Garage).

The Reflecting Skin is layered with symbolic imagery that runs the gamut from arresting to absolutely shocking. For example, one character douses himself with gas and immolates himself in front of Seth. Later, the boy finds a maggoty dead baby that “smells like fish” in a barn and believes that it’s Eben in angel form, so he hides it under his bed, taking it out at night to talk to it. Innocence is stillborn—the movie makes death and decay downright Shakespearian. (Ridley, also a celebrated playwright and visual artist, won awards for his literary film when it played the Cannes Film Festival.)

Even the one ray of hope in Seth’s life is already dimming before it arrives. Seemingly normal older Dove brother Cameron (Viggo Mortensen) comes home from being stationed in Japan to tell stories of witnessing beautiful explosions. Before long, his hair starts to fall out, he loses weight and his gums bleed. Seth mistakes the radiation poisoning for the effects of vampirism (during scenes of Cameron’s physical decline, Ridley added subtle bat noises to the soundtrack) due to his burgeoning relationship with Dolphin. Meanwhile, another boy goes missing, Ruth slips further into hysteria, and that black Cadillac continues to circle ever closer….

There’s certainly an established tradition of prairie gothic horror (notably in the novels and short stories of Flannery O’Connor), but nothing that approaches the hyperbolic trauma and morbid ick of The Reflecting Skin. The title is taken from a scene which perfectly encapsulates Ridley’s sensibility: Cameron shows Seth a photo of a Japanese baby whose skin has turned silver due to the effects of the bomb, so that “you can see your face in it.” Of course, here, “reflecting skin” also refers to the pale countenance of the vampire, that shiny metal Cadillac and, of course, Seth himself, who reflects the real-life horrors around him as supernatural fancy (monsters, angels, etc.). In much the way our protagonist processes his world through the eyes of a child, Ridley approaches the prairie through the eyes of an outsider, reworking it into something new entirely.

For me, however, the movie is pure Canadiana, as the Alberta landscape is unmistakable. But what hews closer to the bone is a sense of something darker stirring beneath the black prairie soil. In the 1990s, I participated in a search for a friend’s missing father who had disappeared and was believed murdered, the body dumped in rural Alberta. We looked into murky culverts, by the remains of rusted-out cars with trees growing through them, and into long-abandoned farmhouses. A few hours of this and the mind would play tricks; what looked through a grimy window like a body was just a pair of shoes and some clothes left behind decades earlier. The experience lowered a spooky shroud over that idyllic rural landscape that never fully lifted.

Other filmmakers have used this setting to explore their own brand of prairie gothic; Terence Malick’s Days of Heaven (1978, also shot in Alberta) romanticizes it, while Terry Gilliam’s Tideland (2005, shot in neighboring Saskatchewan) gave it a magical realism makeover. But The Reflecting Skin is the only work that explores the horrific implications of prairie gothic horror with such depth and flair for the surreal. Beyond monsters real and imagined, beyond childhood trauma, and beyond the pale is a prairie that lives in the dark imagination. It’s alive in the frames of The Reflecting Skin, where sometimes bad things happen quite naturally.

Dave Alexander is the editor-in-chief of Toronto’s Rue Morgue magazine. He moved to the city from Edmonton in 2005, after getting a degree in Film and Media Studies from the University of Alberta. He also programs films, hosts panels at the annual Festival of Fear, is a published fiction writer, and an award-winning filmmaker.