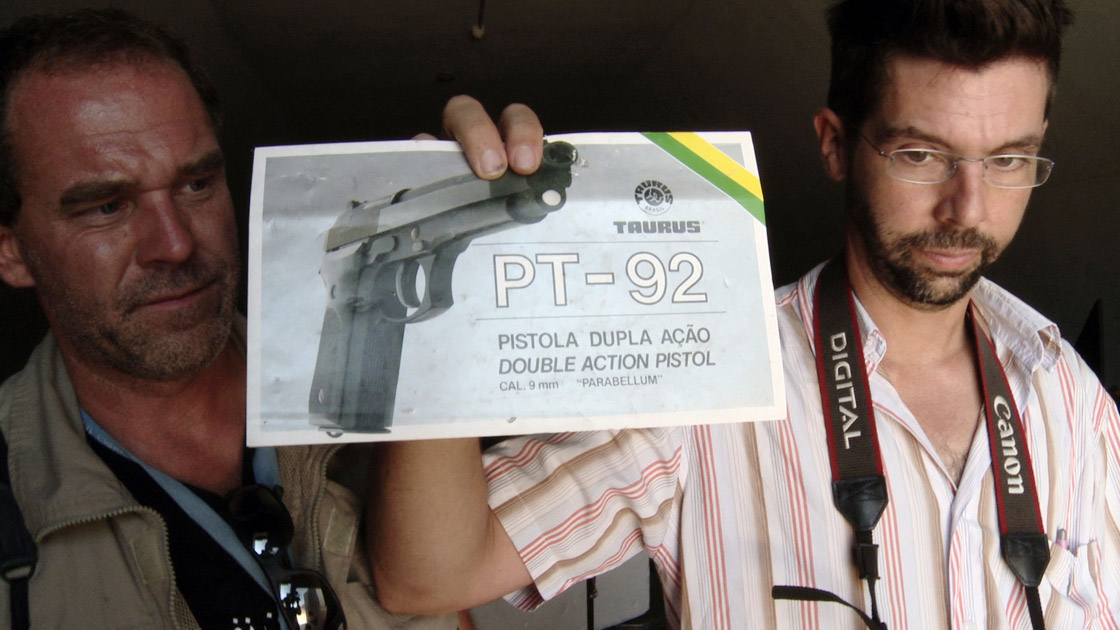 Anderson: For me shooting for this film was a fast YES after learning about the E-Team concept, and knowing I would be working in Syria with Human Rights Watch. I had recently witnessed HRW in action while filming during the Egyptian and Libyan uprisings and respected the quality of their work. It had been difficult to watch the devastating situation in Syria unfold from affair, but with this film I knew I would be in safest hands possible smuggling across the border with an HRW team.

Filmmaker: How much of your crew was female?  Was working and filming with a women a consideration for you?

Anderson: It was a blast filming with [the film’s subject] Anya! The various dimensions women reveal on camera is always intriguing to me as a cinematographer. Not only was Anya incredibly charismatic on camera, and tough as nails (I would not want to be on the wrong side of a HR violation) but also had no fear of showing honest raw compassion. Syria was full of horror stories and close calls but at the end of the day Anya would always find the energy to make sure the team was fed (even if that meant a tub of honey, a can of spam, and one big pita) and she would always find a way to make us all crack a smile.

Having other female members on the crew was also important to my decision to cross the border into Syria. I knew not only was I in good hands with HRW, but I had a team in the States that could understand how my parents felt about me doing this type of assignment. E-TEAM’s producer Marilyn [Ness] especially took on the burden of communicating with my family. Every day she would email back and forth with my Mom to let her know I was safe and sound. Needless to say it allowed me to focus on my job and there were a lot of homemade goodies for Marilyn from my mom last holiday season.

Filmmaker: Do you think a male d.p. might have handled the making of this film differently?  How did being a female d.p. affect how this film got made do you think?

Anderson: This film is a combination of Ross [Kaufman]’s footage and mine. I think having the vantage point of both a male and female cinematographer is an asset to the quality of the film. Characters react differently when a woman is behind the lens. In the Middle East where men are known to be a bit more standoffish when talking about emotion it seems they tend to open up without the fear of looking less macho.

Anderson: There are not as many women working as videographers in the Middle East but we’re essential to tell the full story because in many cases women are the only ones allowed behind closed doors. It is always a challenge as a female working in the region but the trick is to twist the situation into being an advantage. For instance in this film, by wearing local clothing I was able to become a fly on the wall. This allowed me to become quickly familiar and less intimidating for the subject, whether they were male or female, almost an invisible presence to truly capture what is happening in the moment. This ability to change the situation to be beneficial is what has helped me obtain the opportunities that have come my way.

Filmmaker: Of the big blockbuster movies out there, which do you wish you had filmed?

Anderson: Too many to choose from…

I’ve always enjoyed the cinematography in Iraq in Fragments, would have enjoyed hearing the many stories from the characters in Bill Cunningham New York, and I love the fiction film War Witch (Rebelle).

Anderson: A) Honestly I’m really looking forward to having the time to watch other people’s films!

B) I’m interested in seeing and meeting the crew behind the film War Story. Having spent a lot of time working in Libya I think it will be interesting to see their POV of the aftermath of what journalists experience in war.