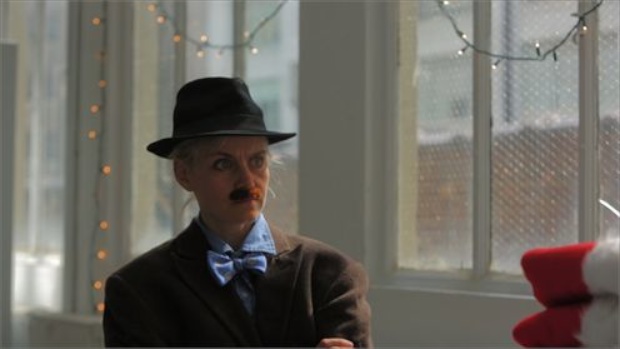 by Scott Macaulay
in Directors, Interviews
on Jan 22, 2014

The following interview first ran on this site in January 2013 to coincide with the world premiere of Towheads at the International Film Festival Rotterdam. It is republished here to mark the theatrical run of Plumb’s film at the Museum of Modern Art in New York between January 23 and 29.

Premiering in Rotterdam, the disarming and oddly delightful Towheads is the feature debut of artist and experimental filmmaker Shannon Plumb. Exploring and extending aspects of her short-form Super-8 work within a feature context, Towheads is, on the surface, a familiar story of a bored housewife whose creative aspirations are stifled by the pressures of domesticity and the disinterest of a work-obsessed husband. But these frustrations are just the catalyst for a charmingly playful series of episodes in which Plumb’s character adopts various guises — a drag king, a pole dancer and many more — in an attempt to explore alternative ways of being. With minimal dialogue, these episodes recall the silent comedy of Buster Keaton, with Plumb bringing to them a rangy physicality and compelling sad-face expressiveness. Towheads is also something of a family affair — Plumb plays the mother, her real-life husband, the director Derek Cianfrance, plays the father, and their two children star as well.

Filmmaker: What inspired the fusion of physical comedy and domestic drama found in Towheads?

When I became a mom I all of a sudden got serious. I couldn’t tell a funny story. I couldn’t make a funny movie. I was smiling but nothing funny was coming out. As I got used to the cries that sounded like stitches but were only gas. And as I realized they wouldn’t go hungry there was always a can of beans in the cupboard. And when changing diapers on bumpy planes was in the past…then I started to realize this was some funny stuff. Maybe if I could look at parenting as a comedy and still maintain my motherly instinct then I could survive another 20 years of Motherhood.

Secondly, I asked Derek to play the husband. Derek and I are like the smile meeting the frown. Without Derek in this movie I think the drama might have gone flat, the tale of motherhood and domestic life would have been completely untrue and unbelievable.

Filmmaker: How does the family dynamic found in the film track your own family life, and how much does it diverge from it? What about in terms of your own character?

Plumb: I have often said that Derek is hunting the bear while I hold down the fort. Sometimes I’ve said it delightfully, other times I’ve said it and growled. In our family, Derek and I are both trying to live our dream. We both want to make films and art. But we also want to be there for our children. So we take turns. I do a project. He helps at home. He does a project, I stay at home. I think we both identify equally with the mother and the father in this movie.

The parents in Towheads fit the age-old roles of mother in her apron, father wears the pants. The dad is a stereotype of the man who leaves for work only to return when dinner is served. He is the man without a face. No one really knows him. The mother is cleaning and child rearing. There are many parents who willingly sacrifice their dreams to be with their children. I wanted to tell that story from a mom’s perspective.

My character is similar to Penelope’s in that I want to be a mother, and, I want to pursue lifelong dreams. Doing two full-time jobs can be exhausting but it’s possible.

Filmmaker: What was it like filming with your own kids, and how did they contribute to the film itself?

Plumb: Walker and Cody brought a purity to the film that I never could have written. They played themselves and lived in the moment. Every take of them is a perfect performance. There is no acting, only being.

Filming with them was tricky though. Cody quit on the first day. Walker refused to do a third take almost all the time. We could only get two takes at the most. I never wanted to push them. They were collaborating with me and so they had a say in everything.
They needed something to do in a scene or they wouldn’t want to do it. Walking with the stroller over and over isn’t fun. But a food fight is.

By the end of the process they had their own little video cameras on tripods next to the DP’s camera (Brett Jutkiewicz). When Brett said “set” they responded with “set”, they’d push record and run into the scene. They were sad when it ended, but I was happy for them to return to their own ideas of make believe.

Filmmaker: What were the challenges, either artistically or in terms of the production, in making this story as a feature-length film?

Plumb: The comedy. For over ten years I’ve made short silent movies: 3-minute comedy sketches. Now I was making a 90-minute comedy. After shooting, I had two dozen really funny skits. We put all the scenes together and watched a rough cut. The moments that were hilarious when shooting were no longer hilarious. I had to learn timing in a whole different language. Being the performer in all my work I’ve practiced comic timing for many years; the timing being within the performance. Now the timing was in the editing and this was new for me, still is. And what a challenge!

Filmmaker:  Where did some of the individual rituals or activities you embark on in the film come from? What inspired them? Were they activities you at one point did for yourself?

Plumb: The breaking of the broom was an important scene. I saw a show of Andrea Bowers which inspired this idea. I thought the symbolism so life changing. I knew women would shed away their bras, but that they would also break their brooms was a confirmation for me and a turning point in the film. This was a statement! But once you break the broom where do you go from there? That’s what Penelope must face in this film. If you are not cleaning the house and being a Mother what are you doing? Who are you without the broom?

The domestic rituals are easy to come up with. A house can drive you crazy. Sweeping, dishes, repetition. Every day life is inspirational. Penelope’s ventures come from fantasy and from me wondering if I could search for myself where would I look – a strip club? A Santa interview? An audition? A stranger’s face? Or maybe I have to find myself where I lost myself. Back in the home.