“These Movies Work Better If You’re Really Stoned:” David Cronenberg on Architecture and His Early Work 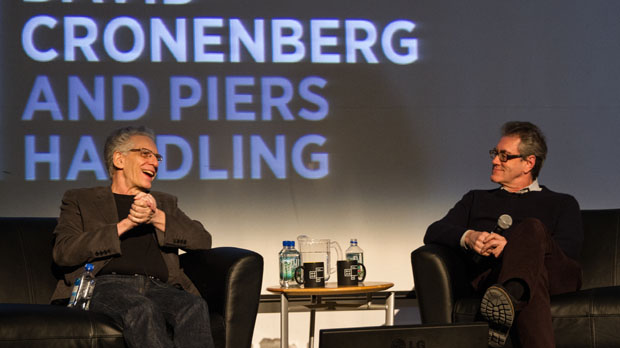 by Allan Tong
in Directors, Filmmaking, Interviews
on Jan 24, 2014

TIFF’s acclaimed Evolution exhibition — celebrating the career of hometown boy David Cronenberg — had just closed when OCAD University hosted a free discussion between him and TIFF CEO Piers Handling. For the past five months, the art school has been partnering with Toronto International on The Cronenberg Project, a multimedia exploration of the director of Dead Ringers, Crash and A History of Violence.

It’s appropriate that the discussion before an audience of 325 students and VIPs centered on Cronenberg’s student years, early films and architecture. The talk began with excerpts from Stereo (1969) and Crimes of The Future (1970), two formal, abstract and wordless films that suffer from typical student pretentiousness. “These movies work better if you’re really stoned,” Cronenberg deadpanned to great laughter. “This was the sixties after all.”

Stereo was filmed at the University of Toronto’s Scarborough campus where his actors were dwarfed by the futurist concrete towers that look like they came out of THX-1138. “It was an experiment for me,” explained Cronenberg. “I structured the film around the architecture, the faces of my friends and the limitations of the Arriflex 2C camera,” a noisy 35mm model that came with a blimp that resisted synch sound and dialogue. Cronenberg stressed that the buildings were brand new. “The emptiness allowed me to completely see this structure in an abstract way, because they were not inhabited yet by human beings. That attributed to the tone — the loneliness, the smallness of human beings….The relationship of technology with human beings has always interested me, and you have to think of architecture as an expression of technology.”

Stereo, shot in stark black and white, offered chilling atmospherics that Cronenberg would apply to his early horror features, including 1975’s Shivers, about a Montreal apartment building overrun by parasitic zombies who rape everyone in their path. “A suburban dream turned into a nightmare,” noted Handling. “The idea was to make a horror film set in a modern highrise. At the time it was revolutionary, because all of the horror films at the time were Gothic, like vampires in castles.” Again, architecture played a key role in setting the film at the “Starliner Towers” which Cronenberg likened to a spaceship that was isolated on an island, which would influence Alien four years later with its spaceship trapped in space.

Handling asked if the theme of repressed sexuality was connected with growing up in the uptight, WASPy fifties of Toronto. “The Eisenhower era was very conservative and nice. Your life wasn’t too sexy, but it was nice,” which meant a wife, house and kids. “Anything adventurous, dangerous, dark or subversive was repressed…This movie, without being totally conscious, was totally formed by coming out of the sixties” a liberating era of rock music and black music helped tear down that conservatism.

In the late seventies into the eighties, Cronenberg set horror films such as Scanners  in corporations where the rigid architecture echoed his student films. “When I went back to Scarborough College [years later] it was trashed. People had been living in it. It had been humanized. They had not allowed themselves to be pushed around by that very aggressive, distancing architecture.”

Altogether, the OCAD interview was more satisfying than Cronenberg’s discussion with his leading man, Viggo Mortenson, the previous week at the TIFF Bell Lightbox, again led by Handling. The trio covered three films, A History of Violence, Eastern Promises and Cosmopolis, trading friendly banter and light jokes, but imparting little about their collaborations.

Cronenberg did confess that he never storyboards, including the infamous sauna fight in Eastern Promises where a naked Mortensen battles two Russian mafiosi in a bath house. “People think my films are very controlled,” said Cronenberg. “They probably imagine I do many storyboards, [but] I’m a totally anti-storyboard person. What I do is I prepare the field for play. You get the players, you get the field, but you don’t know what’s going to happen.” For the sauna fight, he shot a master then captured different angles of the sauna room one corner at a time section to take advantage of serendipity. Cronenberg quoted control freak-director Orson Welles: “A film is a collection of accidents.”