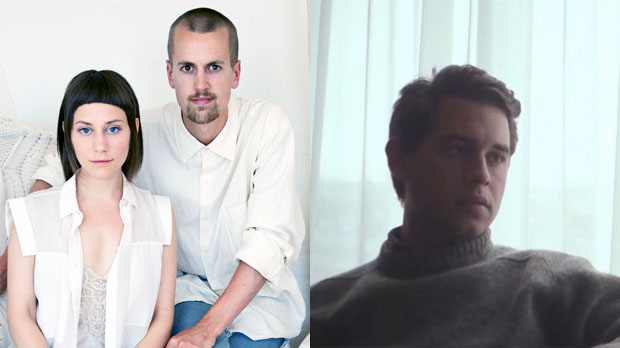 by Andrea Sisson and Pete Ohs
in Filmmaking, Post-Production
on Feb 18, 2014

The following was written by 2013 “25 New Faces” Andrea Sisson and Pete Ohs in advance of the first screening of their film The Other Men of Dodge City, a re-edited version of The Men of Dodge City by fellow 2013 “New Face” Nandan Rao. The film plays on NoBudge from Wednesday February 19 at 7pm. Check back tomorrow for Rao’s response to seeing the reworking of his film for the first time.

First and foremost, Nandan’s eye is a force to be reckoned with. When we first saw The Men of Dodge City, we laughed at the snail’s pace and non-existent storyline because those things simply didn’t matter. Every frame was a painting to be studied — a painting beautiful and somehow classical. The images he captured are stunning. His composition is a character. Quiet and calm, Nandan created a very extreme film.

Our editing style can be quite different from how Nandan’s film was edited. We like to experiment with the layering of sounds and images, creating new connections, emotions, and arcs to bring out narrative. We wondered what would happen if we combined Nandan’s incredibly strict arrangement of master shots and silence with our more complex approach to editing. What narrative could we uncover? Of course, it would result in a film different from Nandan’s original vision but still, what would this OTHER version be?

There’s more than one way to skin a cat and there’s more than one way to edit a film. Many of the ways will end up with an equally dead cat and an equally interesting film. There’s a lot of power and flexibility in editing. Malick. Right? And Ridley Scott releases a million director’s cuts. A script may be the beginning but we all know it’s not the end. The order of images will tell different stories and evoke different emotions. A director with a vision will decide on a sequence to communicate an intended message. But there are more messages buried in the footage and in the performance.

We did not know Nandan at the time of the idea, but had mutual friends and upon meeting, told him this idea of re-editing his film. Nandan is a rascal and a troublemaker and he loves pushing boundaries so of course he was more than down for an idea like this. He quickly shipped us a hard drive.

So, we started editing together the film and that takes time. Less time than starting from scratch, but we still spent a lot of time with the footage. It felt like we were spending time with Nandan and we were continually impressed with the decisions he had made as a director, d.p. and filmmaker. This was a rewarding part of the process because at the time, we were considering having Nandan involved in our next feature. So, we started our layering game and a new journey for the characters arose. Not completely different, but certainly an alternate reality. We tried listening to the truth of the characters in the scenes and worked to bring that out. Then, a month later, we were all chosen for Filmmaker Magazine’s “25 New Faces of Independent Film” and the Grand Cinema in Tacoma created an opportunity to share this collaborative work. We were almost finished editing The Other Men of Dodge City and it was Nandan’s idea to screen our edit of the film. It was also his idea to wait until the screening to see it for the first time… He is extreme.

So, Nandan made a film. He wrote it, he directed it, he shot it. It’s his baby. And now we took that baby and taught it to speak a different language. When he sees it, will he still recognize the kid as his own? Or will it seem like somebody else’s kid? We’re excited to find out.

If he likes it, and we really hope he does, we want to continue this trend of re-editing finished films and try to do an OTHER film every year…