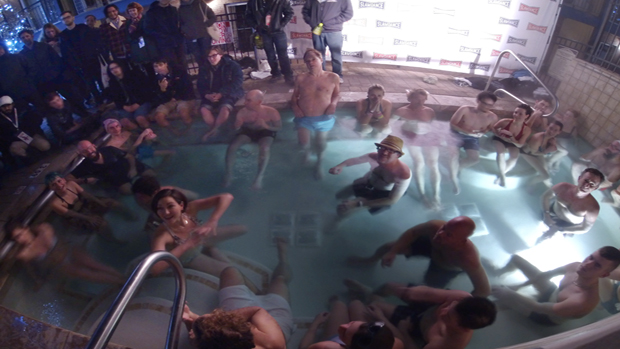 Feeling self-satisfied and/or congested from your annual Sundance winter camp? I’ve got news for you: Hollywood doesn’t care about another head-scratching indie with pigs in it, or an over-hyped VOD deal from a company you’ve never heard of for a film no one will ever see. Nope. Hollywood counts success in dollars, rubles and yuans.

The films in Park City may not spin the world’s turnstyles, but the filmmakers who make them most definitely will. At the Slamdance Film Festival, a snowball’s throw across the street from Sundance, we’ve been saying for 20 years that our focus is on discovering new talented filmmakers. We’ve had Oscar winners, Palme d’Or winners and countless filmmakers who’ve gone on to show their second or third films at Sundance. But if the proof is in the pudding, then take a slurp of this:

Just looking at first-time directors who’ve screened over the past 20 years at Slamdance, their worldwide box office gross for films they’ve directed or produced is more than $10.618 BILLION (according to Box Office Mojo). It’s also worth noting that the filmmakers currently behind the reigns of both the Marvel and DC universes are Slamdance alumni. Hollywood? You’re welcome.

Sure, there will be the naysayers who wonder if most of that money is just from Christopher Nolan and his producer/wife Emma Thomas? Indeed, $4.2 billion is. (Not too shabby for a couple who had 14 people at their first Slamdance screening of Following in 1999. Needless to say, their marketing efforts have improved.)

Oh, and that’s just the first-time directors we’ve showcased in competition. If you add in directors we’ve screened out of competition (typically not their first film), the worldwide collective gross adds up to over $12.522 Billion. That’s roughly the annual GDP of Albania. And if you start to include actors, producers and others that have been a part of Slamdance (ie. Ben Affleck, Mark Ruffalo, Vince Vaughn, Roger Corman, et al), there’s no telling how high you could tally.

Now, most film festivals that have been around for 20 years or more can probably boast similar numbers, and I’m sure Sundance itself is no exception. But what’s unique about Slamdance is that the festival is actually programmed and organized by its own alumni filmmakers, and we’ve created a unique community unrivaled by any organization our size.

Producer Emma Thomas was a programmer at Slamdance for two years after she and Chris showed Following. The Russo Brothers were also programmers for two years after their debut feature Pieces screened at Slamdance in 1997. Chris, Emma, Joe and Anthony were all back this year at the festival to mingle with the new crop of filmmakers and with each other. (Let’s just say that if the Winter Soldier turns out to be Alfred the Butler, you may have Slamdance to blame.)

Frédéric Forestier used to build the risers in our Treasure Mt. Inn screening room. Mark and Kent Osborne once set up yellow air conditioning ducts. Steven Soderbergh got electrocuted while fixing our projectors. And Oscar-nominee Bill Plympton doled out words of wisdom to eager young filmmakers in our Hot Tub Summit.

So, for all you Hollywood agents, producers and studio heads who get a call from a scruffy Slamdancer chiding you for missing their world premiere, I’d suggest you take the call. It could be worth billions one day.

Slamdance Co-Founder-at-Large Dan Mirvish is also a working filmmaker. His award-winning movie Between Us with Julia Stiles and Taye Diggs screened in 23 festivals and had a 50+ city theatrical release. It is currently airing on Starz and Showtime. Mirvish’s Slamdance-founding film Omaha (the movie) is now available on Fandor and Amazon Instant.