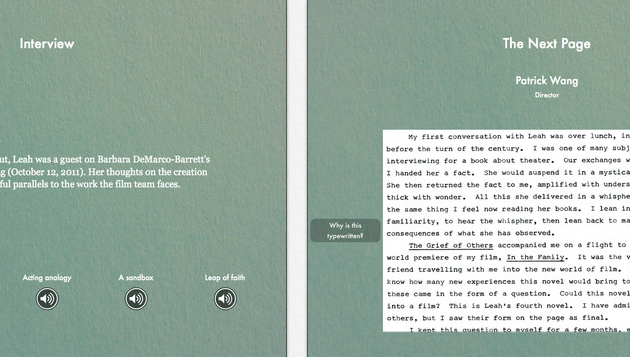 by Sarah Salovaara
in Filmmaking, Production
on Feb 18, 2014

Patrick Wang, who made our 25 New Faces list in 2012 with the release of his debut film, In The Family, is gearing up to shoot his sophomore picture, The Grief of Others, based on the novel by Leah Hager Cohen. Starring Rachel Dratch, Wendy Moniz and Trevor St. John, the film examines the grieving process of a couple who lose their child 57 hours after his birth.

In accordance with the the production process, Wang and author David Chien will maintain a regularly updated multimedia and interactive iBook entitled, “Post Script: The Making of the Film, The Grief of Others.” With texts, sounds and images — beginning with the initial email conversations between Wang and Cohen — “Post Script” aims to be a behind-the-scenes account, told in (almost) real time.

At a Screencraft panel I attended last November, Bond 360 CEO Marc Schiller emphasized the importance of engaging and galvanizing your audience from the get-go. To not wait until production has wrapped, but to “start sharing immediately.” Here is a great example of how to raise your film’s profile before shooting even begins.