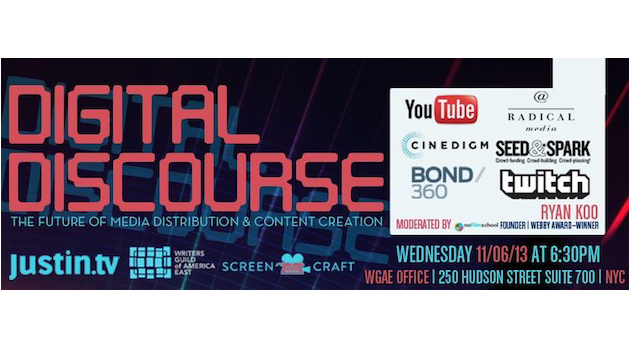 by Sarah Salovaara
in Distribution, Filmmaking, Financing
on Nov 8, 2013

“Distributing is easy, marketing is hard.” With that statement, moderator Ryan Koo kicked off the discussion at ScreenCraft’s recent Digital Discourse panel on the future of content creation and releasing. Nestled in the WGAE suite of a Tribeca high rise, the participating panelists included YouTube’s Amy Singer; Erica Anderson, Chief Marketing Director at Seed&Spark; Erick Opeka, SVP of Digital Distribution at Cinedigm; @radical.media’s Adam Neuhaus; and BOND 360 Founder and CEO, Marc Schiller. Chances are, you’ve heard it before: with so much of the independent film world unspooling in a viral sphere at a hair-raising pace, filmmakers must be prepared to not only realize their script, but bring the finished product directly to an audience.

Awareness is one thing, yes, but it’s the execution that counts. So how do you find that audience? “Start sharing immediately,” advises Marc Schiller. “Not necessarily content, but you need to start building a community around your content very early.” “Content was king, now, community is king,” echoes Adam Neuhaus, who suggests seeking out collaborations with complementary brands to find an interested and invested audience. No longer can filmmakers afford to think in terms of a single project. Erica Anderson suggests looking toward the music industry for solutions on how to cultivate and maintain a long-term fan base. “[Musicians] are not building their community around one album, they’re building it around themselves as a band. So then they get to create this sort of buzz when this album is different from the next one. Think of your career as a whole, instead of individual projects. When you hire a marketer, they’re the ones marketing that film, they’re not marketing you as a filmmaker, or what you’re going to do next.”

Indeed, while some may view crowdfunding with skeptic’s eye, as a sign of an unsavory budget gap, all of the panelists agree it’s a positive tool for engaging your audience. “You’re saying, ‘Do this with me, go on this journey with me, have a say in what you want to see,’” notes Anderson. “Make people feel a part of the process,” by removing the mysticism, inviting them to see exclusive material or go behind-the-scenes. Amy Singer also encourages interaction, and soliciting of feedback: “Figure out what really matters to them.” Erick Opeka views crowdfunding investments as a sign of audience intent, additionally commenting that distributors, unbeknownst to many, are already watching at that sourcing stage, “looking to get a jump start.” (For what it’s worth, Schiller admits that 80% of his clients have crowd sourced a portion of their budgets.)

So how do you go about courting and interacting with your “fans”? Singer is quick to cite YouTube’s audience retention tool, which allows you to determine when your video reaches peak popularity, and when it’s, well, abandoned. Don’t be afraid, she says, to follow up and ask why. Further, YouTube’s Playbook is a handy guide when it comes to audience strategies, in detailing analytics, paid promotion, and metadata resources. Just make sure you have a channel for viewers to subscribe to. Anderson frequently relies upon Google Analytics to determine how viewers are “getting [to the site],” which allows her to “target outreach in a productive way.” Koo is big on email – organizing contacts through Mail Chimp or Constant Contact – and scheduling tweets through Hootsuite or Tweetdeck. While running his successful $115,000 Kickstarter campaign for Manchild, Koo would schedule tweets at night to reach an international audience, which eventually netted him his single biggest backer in a $9000 pledge from a German stranger. Also, use your network. Cold emailing may get you nowhere, notes Koo, but if you know someone who knows someone, ask them to make that connection. With the wealth of diversions available online, constantly churning in the 24-hour news cycle, it’s up to you to establish an audience, and maintain that connection. That way, when your film is released, you’ll already have a built-in network to sell to.