Berlinale 2014: A.J. Edwards on The Better Angels and Terrence Malick 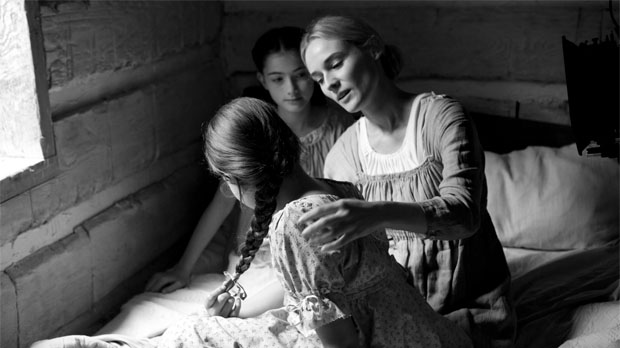 Watch any sequence of A.J. Edwards’ poetic The Better Angels and the influence of executive producer Terrence Malick is abundantly clear. Edwards’ relationship with the Days of Heaven director started in 2005 when he worked as co-cinematographer on the documentary The Making of The New World as well as co-editor on The New World. Subsequently, he was second unit director and co-director on The Tree of Life, To the Wonder and the upcoming Knight of Cups, starring Cate Blanchett, Christian Bale and Natalie Portman, which Edwards reveals is definitely coming out this year. Thierry Frémaux must be doing cartwheels.

The Better Angels, about the early life of Abraham Lincoln, started life as a Malick project. For some years, Malick researched and developed the concept, attracted to its simplicity and the stage-like setting. He then handed the project over to his protegé, who wrote and directed the film that has appeared at both the Sundance and Berlin film festivals in recent weeks.

Filmmaker: Can you tell me about the involvement of Mr. Malick, and how that influenced the project?

Edwards: The project began with Mr. Malick and I speaking during postproduction on The Tree of Life. Before there was a treatment or a screenplay, he and I sort of decided on production fundamentals as far as how to get this story onto the big screen and how best to achieve that in terms of cast, shooting scenario, settings; all these kind of basic fundamental questions, which obviously he’s had much experience dealing with and still continues to deal with. He was not able to assist directly with production, because he is making two pictures of his own that will be coming out this year. [In addition to Knight of Cups, Malick has a picture set around the Austin music scene that stars Rooney Mara and Michael Fassbender].

Filmmaker: How much influence did The New World have on this film?

Edwards: That is the picture that I’ve heard people mention a lot when they see The Better Angels. When they mention one of Malick’s films, it is that one that comes to mind and they compare the two rhythmically. The New World is very important to me because it’s the first feature film that I ever worked on, back in 2005, and that is where I met Terry. I was able to cut my teeth on that picture; editorially, that’s where it began. It was my film schooling, I would say. I think it’s a masterpiece and gets better with age.

Filmmaker: Was it by accident or by design that you got to work with Malick?

Edwards: I would say that it was fortuitous because at the time I was living in Virginia, where they were shooting. That is where I got involved in production, through Sarah Green, who I met through a mutual friend.

Filmmaker: Stylistically, The Better Angels feels almost like being read a story at the start?

Edwards: I think that is a great way to put it. It should feel like a fireside chat, in the sense that this aged narrator, being Lincoln’s cousin, is able to give you a complete insight into the intimacy of the homestead and anecdotes that no one otherwise would know. He is also sort of an unreliable narrator in that he is mischievous and playful in what he decides to speak about and what not. But all that was based on this interview published at the turn of the 20th century by Eleanor Atkinson, an interview with Dennis Hanks, Lincoln’s cousin, where he spoke at length about his entire life but especially about the Indiana years. [“Lincoln’s Boyhood: Reminiscences of His Cousin and Play-mate, Dennis Hanks” appeared in American Magazine 65, (Feb 1908)] 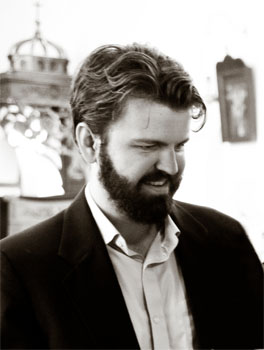 Filmmaker: Why did that fascinate you so much? Was it the interview or the period?

Edwards: The period definitely, but that interview, you can read it. You laugh out loud reading it; it’s like reading Huck Finn or True Grit where the narrator has such a definite voice and speaks so rhythmically. He’s very bittersweet too with this Appalachian attitude; he’ll find humor in something and the next moment he is weeping, remembering the loss. He goes back and forth in a sentimental way.

Filmmaker: Is that in tune with the way you look at the world?

Edwards: Boy, I would hope so. I think it is a goal to look at the world that way, to definitely find a humor in despair and suffering.

Filmmaker: You shot this film in among so many trees yet it is in black and white?

Edwards: You think the trees should have been in color? I think that the black and white was for austerity. It’s sort of an idyllic time when you think of frontier life. I think that removing the romance and creating a more austere aesthetic helped in achieving immediacy and black and white creates abstraction where things are more iconic, things are starker, you remove all business, loudness, you can look at things as they are in their essence. So, for sure, to miss a New York fall with brilliant colored leaves was painful but I wouldn’t change it for the world because I adore the immediacy the monochrome palette gives it.

Filmmaker: What makes you want to shoot in the woods? Is there something about your upbringing?

Edwards: I wouldn’t say so. I’m not what you call outdoorsy. I think that the narrative required it and also the iconography that the wilderness provides, being these towering trees, these high canopies, these pillars of hardwoods. I think when making a movie the real goal is to find what is your imagery, what are your icons, how can they tell the story rather than dialogue? I think these pristine virgin woods and young Lincoln being dwarfed by them sets up a great visual story in this film.

Filmmaker: I guess the reason that I thought about it in the real world was the idea of the birth of America: your use of the flag, the attitude of the children, etc. Was that something you were trying to aim at?

Edwards: Yeah, I think that is something interesting that you say The New World is about the birth of America because I think the one quote I like that sticks in my head, “The American revolution is the conception of America and then the Civil War is its birth.” That is when America, after the effect of the Civil War, is achieving its initial purpose, which is all men being created equal, endowed by our creator with inalienable rights. The revolution, as important and wonderful as it was, didn’t achieve its goals. It sort of left the snake of slavery sitting under the table upon which the declaration of independence was signed. The Civil War was the fulfillment of everything that needed to happen after the revolution. The New World is about 200 years before the events of my film, but just in talking about the birth of America it is important.

Filmmaker: With Malick, you hear about him rewriting as late as the edit room. In terms of the way you wrote the film, is that something you did with the narration?

Edwards: I think that there is always some kind of changing and you need to be malleable and flexible. The picture was shot in such a way so as to not be cornered in, in the editing room. Without coverage we were allowing ourselves to be free in the cut. I wouldn’t say [that we would] rewrite things but let the picture take its own form, like a child. I wouldn’t insist on it being something, but allow the film to make up its own mind and grow as it seemed fit, a more natural process.

Filmmaker: Growing up, you are more likely to have been exposed to genre films. How did you find yourself more attached to the Malick style of filmmaking?

Edwards: I wouldn’t say that growing up the style of the films I was watching was so separate from the style of this picture because I’ve always liked unique pictures. The French New Wave. After all, the jump cut didn’t start with the New World it came about in the ‘60s with Godard. Deep focus photography was there with Welles and Kubrick and the kind of concentration on nature being in Pather Panchali or in Mizoguchi films. All these things that we assume to be Malick have existed many ways before. Growing up, I was influenced by so many pictures. The austerity in the black and white is from Bresson.

Filmmaker: What’s you next film?

Edwards: A picture I will start shooting in the fall, a contemporary drama that is sort of redemption story that we are working on that right now.