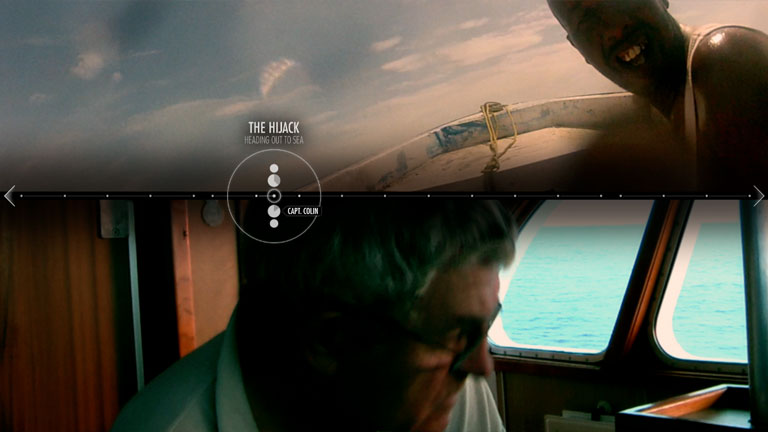 by Steve Macfarlane
in Director Interviews, Filmmaking
on Mar 14, 2014

Femke Wolting & Tommy Pallotta’s experimental doc Last Hijack sees the venn-diagramming of a rigorous interview style and breakout swatches of rotoscoped animation, ala Waking Life (which Pallotta produced.) In lieu of philosophical digressions or convoluted dream sequences, the filmmakers use animation to depict the unfilmable: nailbiting raids by Somali pirates, led by one Mohamed Nura, who casually recounts his adventures to the filmmakers between mouthfuls of khat.

Never feeling doctrinaire, the film takes an earnest stab at correcting the way the West considers seaside piracy, delineating a cycle of corruption and violence starting with Mohamed’s father. Wolting and Pallotta carefully negotiate the vagaries of day-to-day life back in Mohamed’s small seaside town as well, tracking the young criminal as he takes a new wife and debates giving hijacking up altogether with his parents. Last Hijack premiered at SXSW in the SXGlobal section, and has its last screening today.

Filmmaker: The people interviewed in this film suggest a kind of golden era of the criminal lifestyle, of piracy, that’s since passed. How long had you been following this story? Would you have been there with cameras in those early days if you could be?

Wolting & Pallotta: We had been following the story for about 4, 5 years. When we started the research, piracy was still very much happening. When we were filming things had changed. The first years, the pirates were seen as heroes in the Somali community, people saw the ransom money as a kind of ‘tax’ payment from the West to Somalia for fishing in their waters. But for the film it was interesting that this had changed. Now a large part of the population has turned away from the pirates. The impact has been devastating in the country, a whole generation of men disappeared, in jail or died at sea. And also the lifestyle of the pirates that survived, having multiple women and abandoning their families, made people angry with the pirates. For the film this was interesting, because we could show the conflict about piracy in Somalia in the film.

Filmmaker: Did Mohamed know about the animated sequences ahead of time? Did he influence them at all?

Wolting & Pallotta: Yes he did, he really liked the idea of being an animated character in the film. We showed him the first design tests, and he liked them a lot. He did influence the some of the sequences, some of them are based on stories he told us, others are more our impressions of how Mohamed perceives the world.

Filmmaker: There is certain ignorance in the way these men are considered in Western media – they’re rarely given any context. Were there stereotypes or rumors you wanted to correct in the documentary?

Wolting & Pallotta: The image you saw in Captain Philips was that the pirates were a group of drug-addicted criminals. I’m not sure if there are many stereotypes about the pirates in the media, its more that people don’t know much about the people behind the hijacks. We got curious to find out what  makes these men undertake these dangerous activities, to learn about what drives the pirates. We didn’t set out to make a definitive film about piracy; we were more interested in what one would do to survive in a failed state.

Filmmaker: The amount of coverage — like during the phone call between Mohamed and his father — is remarkable. How many shooters did you have working concurrently when you were in Somalia?

Wolting & Pallotta: We had only one camera team in Somalia that consisted of two Somali men who are now living abroad. One is a journalist in the UK and the other was a cinematographer that trained in the Netherlands. Through them we were able to get much closer to the characters in the film.

Filmmaker: The interview with the radio DJ is also an astonishing moment in and of itself. Were you planning to give as much of the film to him as you ended up doing?

Wolting & Pallotta: The radio journalist has an anti-piraacy talkshow. He invites ex-pirates and relatives and friends to discuss piracy, and tries to influence young men to not join the pirates. He get’s death treats all the time, and his brother (and colleague at the radio station) has been murdered. The scene where the radio journalist receives the death treats was something we never planned, and it was such as astonishing and spooky moment. With the storyline of the journalist, we felt the constant fear and danger of daily life in the country, thats why his storyline became an important part of the film.