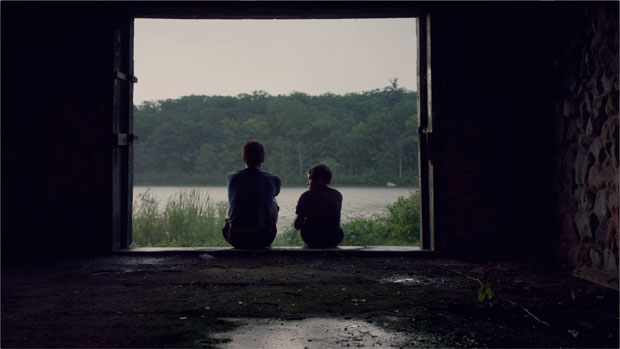 by Brandon Harris
in Director Interviews, Directors, Interviews
on Mar 22, 2014

Promising newcomerDaniel Patrick Carbone’s Hide Your Smiling Faces, well received at festivals such as Berlin, Tribeca and Abu Dhabi, is a sumptuously shot meditation on the difficulties faced by a couple of rural New Jersey teenage brothers following the untimely death of a friend. The film’s delicately designed frames, as well as its super spare screenplay, studiously withhold information — artfully, but perhaps somewhat tediously, denying the audience pleasure. (That pleasure is subsequently generated, however, by the beauty of Hide Your Smiling Face‘s overall visual aesthetic.) The picture’s rather chilly style is somewhat reminiscent of Alastair Banks Griffin’s Two Gates of Sleep, with the unbridled emotion of the eldest brother providing a powerful counterpoint to the ethereal filmmaking on display.

Like so many anti-coming-of-age tales involving boys in small towns, misplaced masculine anger drives the movie toward a resolution that is satisfying without being conventional. The appealing cast of newcomers are more or less Bressonian models as opposed to fully fleshed characters; their lack of psychological complication, however, doesn’t prevent the movie from providing moments of significant emotional heft. Boasting a gallery of fine technical credits and a feel for temp morts-fueled “mise en scene-first” modernist filmmaking, Hide Your Smiling Faces is the type of debut that leaves you greatly anticipating more work from nearly everyone responsible.

Hide Your Smiling Faces opens this Friday via Tribeca Film. 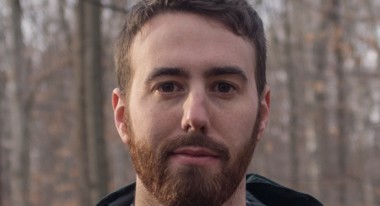 Filmmaker: A lot of people tell me when I talk to them about their movies that they spend a lot of time during the shoot obsessing over something that winds up insignificant. The shot they really thought was going to be very significant thing, that people would remember forever, is often the thing that gets discarded or goes unnoticed.

Carbone: Yeah, absolutely. And also stuff you don’t even necessarily intend to be something that people read is read by four or five different critics. There’s an element in the film, which isn’t clear, but it wasn’t something I was really trying to get across: “it’s that [the boys] just moved to this [town].” There’s nothing explicit in the film that says that; it wasn’t something that we talked about with the actors or anything, but there have been four or five different critics who have interpreted it as [the boys] just got here and are trying to fit in in this town, which is interesting to me.

Filmmaker: Why do you think that is? Is it because the relationship between the dead boy and these two brothers is sort of tenuous, like they’re still feeling each other out? That there isn’t a big history?

Carbone:  I think so. I think there’s a little bit of that. I think also what I spent a long time trying to really hone in on was what it was like to be five or six years apart from your sibling, which is what my brother’s and my relationship is like. He’s five and a half years older than me. You’re not friends really, but you kind of have to be, because you have no one else to hang out with. I think there’s this sort of distance between the two of them, but they’re still friends. That’s what they based their interactions on. So I think there’s a distance that was intentional. There’s this line where [one brother] says, “I hate it here,” which I’ve said for the whole 18 years I lived in that place.

Filmmaker: Did you shoot it in New Jersey?

Carbone: Yeah. Everything except the [scene with the] bear; we had to go to the bear, basically. But yeah, everything is my hometown. There’s four or five really small towns that make up my high school district, and it was all there.

Filmmaker: So were you guys able to get in-kind stuff for the locations or for food?

Carbone: We didn’t pay for a single location. It was my parents’ house and my friend’s house. The ice cream place [the boys] steal food from is a place we used to just go. We just had to buy some ice cream [to shoot there]. But yeah, it’s the kind of place where nobody knows that you should ask for money or that they should be getting something in return. The last movie that shot there was Friday the 13th, the original. Everybody brings that up when you say you’re making a movie. They’re all still super proud of that. Even the cops are in on it. The bridge we shot in was a place we used to really go and hang out. They know kids are always in there, and while we were shooting there were kids crawling in and smoking weed a couple holes over. We asked them for permission, and they were like, “We can’t give you permission, but we also can’t really stop you from doing it.” It was truly the middle of nowhere; everything you learn about producing a movie in New York goes out the window.

Filmmaker: Did working in such a low-key location give you guys any freedom in terms of how you structured the shoot or how you actually carried out the production that maybe you wouldn’t have had otherwise?

Carbone: The script was written in the way so that this scene could move here or that scene could move there. It didn’t even necessarily need to be shot for the whole piece to work. We had 16 days and barely enough money. It was like if it rains this day we can’t be totally fucked so we need to [be able to] move a mile down the road and shoot [another] scene.

Filmmaker: So it actually made moving to cover sets easier?

Carbone: Oh, totally, and if the bridge people said no, there’s 20 million other crumbling structures. Let’s walk across the street to this other bunch of woods and we can probably get the same scene. There was a whole bunch of fantasy stuff in the film that we didn’t get a chance to shoot. You don’t miss it. A lot of the scenes kind of stand alone, or are only kind of tenuously linked to the ones around it.

Filmmaker: Did you find those kids through a casting director?

Carbone: We didn’t have a casting director or anything. We did it basically the same way we did our student films, which was with a Craigslist open call. We reached out to a few child extra agencies and [their child performers] were really terrible. We found the two main kids on either Craigslist or Mandy.com. I have a friend who works in a commercial house and we went in on the weekend and did auditions with 100 kids. The younger one had been in shorts and on stuff on like Law and Order. The older one had never done anything. He was a struggling fourteen-year-old model in Atlanta. He flew up for the audition, which was pretty impressive. But no professionals. Even the adults were kind of people we’d either worked with before or people I just kinda bumped into.

Filmmaker: The film often prioritizes the shot over the cut.

Filmmaker: What informed that style?

Carbone: I’ve always been drawn to movies that feel like they’re cutting only when they must. I’ve worked on a lot of films, including my own, with young actors where you can kind of tell they’ve built the movie around a shitload of coverage. The performances are kind of built out of this good moment and that good moment, etc. I wanted to challenge myself to make a coming-of-age film that isn’t shot in a way where you are covering your ass. We had two plans. One was the way it was shot and [the other] was more traditional. The first day we did a scene that’s not in the movie, a scene where [the boys] both get their heads shaved by their mom. I gave them some stuff to talk about and they just totally killed it. So that was a big sigh of relief, and I knew we could do it that way.

I think that’s what cinema has always been to me. I think it’s pretty apt most of the time to find the angle that tells your story the best and hold it until you need to find a new angle. I don’t know. It’s a slow movie, it’s a quiet movie. It just felt like the appropriate style. People who influence me [include] Tarkovsky, who talks about movies in a way I can totally relate to. I wanted to prove that I could even make a feature film. It was like, “If no one ever sees this movie then, oh well, I know I’m in the wrong business.”