She Said, She Said: The Galapagos Affair, Satan Came to Eden 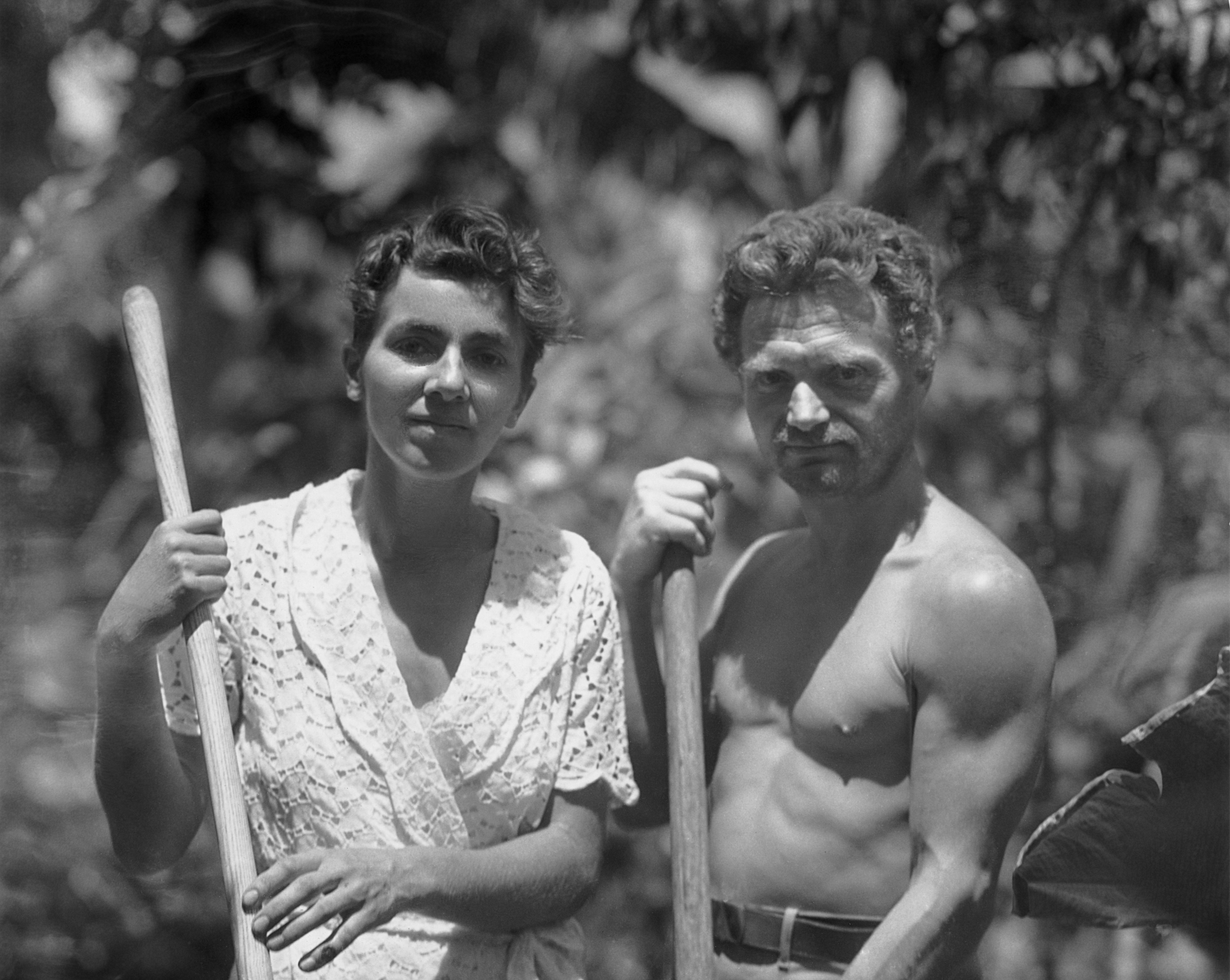 by Howard Feinstein
in Filmmaking
on Apr 4, 2014

Suffering is something to endure and learn from, the compact, muscular German expat physician Friedrich Ritter tells his MS-afflicted mistress and fellow exile Dore Strauch in Dayna Goldfine and Dan Geller’s painstakingly executed, strangely fascinating documentary The Galapagos Affair: Satan Came to Eden. The silent scene is taken from old footage left by a handful of German and Germanic settlers who attempted to eke out an existence far outside their comfort zones on the tiny, inhospitable Galapagos island of Floreana during the period of 1929-34.

Strauch had dared to complain that the DIY lifestyle was too tough for her to sustain. Ritter, however, was an unapologetic Nietzschean. His wholehearted embrace of the concept of the übermensch—in his downtime he wrote philosophical treatises for future publication—made no allowance for a mind-body split. Tension began to mount soon after their naive arrival in 1929—when they still had the island to themselves—until 1934, when she returned home after his suspicious death, either from ingesting rotten chicken or involuntarily receiving a fatal dose of morphine, depending on which of two women’s memoirs you find more credible.

If only Ritter had an inkling of the degree of anguish that not only Strauch, but also he and their and their impending neighbors, would have to cope with. Ritter and Strauch’s intra-family conflict was the kernel of what would develop into inter-family strife after two additional self-declared misfit clusters from Germany and neighboring Austria marked their turf on this isolated outpost, where the fauna was as odd as the newcomers, the soil fertile yet the resources scant. (The word family is used in the broadest possible sense.) By the time a victor in this prototype of Survivor emerged, the number of its members had increased by one, the island’s first newborn. Between the other two groups, four people were dead or presumed so, apparently from unnatural causes.

Not even a screenwriter with a wild, even kitschy, imagination could come up with a storyline including a desert island, adultery, disappearance, murder, and well-documented social Darwinism right where the theory of natural selection evolved and that just happened to take place right when the movies were converting from silent to sound. Goldfine and Geller had been researching the bizarre happenings on the island since reading about them during a work trip to the Galapagos in 1998 and meeting the last survivor of that era. Around 2000, the couple learned of decaying 16mm footage found in archival material at USC donated by long-dead industrialist/amateur scientist/yachtsman Allan Hancock, who had filmed on Floreana, initially to investigate some of Ritter’s born-of-necessity inventions.

Though not the product of an eccentric screenwriter, the footage contained a wild if thin melodrama with intertitles performed in the overdone style of the day. The main character was a temptress on an exotic isle, a clear double for another main cog involved in the Ritter-Strauch saga: the so-called “Baroness” Eloise Wehrborn de Wagner Bosquet, a beguiling, larger-than-life enchantress. Her reason for coming in 1932 was unashamedly materialistic, totally at odds with Ritter and Strauch’s motivations as well as those of Heinz and Margret Wittmer, the second family that had arrived a year earlier. That couple had become fed up with the political and economic situation in Germany, and at the same time were seeking a hospitable climate for their sickly 14-year-old son Harry.

Connections among the three families were never strong. The Wittmers learned of Ritter and Strauch’s idyll because someone had poached their letters home in transit. Since Marget was pregnant, they assumed (incorrectly) that Ritter would be a willing participant at the birth. The Baroness had read Hancock’s published accounts of visits to Floreana and was hit by the entrepreneurial bug: she would launch a hotel for passing millionaire yachtsmen. Even then, it was not easy to escape from society.

Far different agendas did not make for compatibility, much less community. Increasingly divisive issues replicated more and more those that Ritter/Strauch and the Wittmers thought they had left behind. As it turns out, perhaps as in the larger world, the females of Floreana seem significantly more compelling than the males. These women of the houses couldn’t have been more dissimilar, however; they fit a Freudian model. The Baroness was pure id. She invented her identity, traveled and lived with two younger companions, handsome Robert Philippson and mousey Rudolf Lorenz, the latter ultimately a central figure in the compounded tragedies of Floreana. She successfully deployed her seductive tactics on government functionaries and wealthy men like Hancock. For her, posing suggestively was just business as usual. Strauch was ego, a pale shadow of her partner’s confident philosopher, but an anti-hausfrau. Margret, the superego, was a committed bourgeois housewife, looked down upon by Ritter and Strauch, with black-and-white principles of right and wrong which may or may not have held up when events were reassessed years later.

When required—such as at times of birth and death—Strauch and Margret were friendly enough. Goldfine and Geller felt that the footage confirmed what they already knew from some journalistic accounts, diaries, and books by the two Floreaner women who had described Ritter’s demise and, according to the co-directors, gave it “a visual dimension.” Even more notebooks and articles accompanied the film cans. Goldfine and Geller show us irresolvable dilemmas, such as the completely contrary ways they describe in their books (Strauch’s Satan Came to Eden [1935] and Margret’s Floreana: A Woman’s Pilgrimage to the Galapagos [1959]) Ritter’s dramatic final moments and the sudden disappearance of another Floreaner. One or both is lying: Margret’s version of the vanishing is absolutely impossible, while Strauch’s proclamation upon departure that Ritter’s work “will live on through me” is so overdramatized and self-important that it suggests at least a partial motivation in offing him. 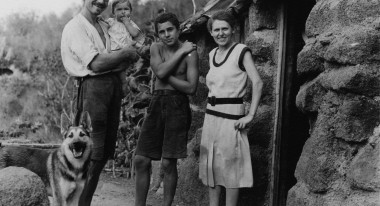 Even though Goldfine and Geller smelled vinegar in a lot of the archive’s film cans, they managed to transfer a lot of the footage to tape and catalogue it, and the black-and-white still looks quite good. Assembling bits and pieces according to written text was clearly a daunting task that meant innumerable difficult decisions. Some choices are better than others, like the music: Laura Karpman’s eclectic score sometimes links with drastic changes in weather, such as when the devastating drought ends with heavy rain and flamenco. It’s a string-heavy Latin and generic indigenous fusion, at least to this untrained ear.

The co-directors have discussed the amount of thought they gave to the tool of foreshadowing, used to such terrific effect by Hitchcock. I think they have done a terrific job of implementing it. The island’s birds, reptiles, and mammals are ideal anticipators; a tortoise’s eye is overwhelming. The spoken words from Strauch and Margret’s books could have been more suitable for setting up a mood or action if they were less purple and forced.

The verbal text in general is a problematic major distraction, although I cannot suggest a viable alternative. As with Hollywood animation, the goal is to hire big names for speaking parts—literally, speaking-only parts. To me, this is odd: Aussie Cate Blanchett does perfect Berlin-accented English as Strauch, while German star Thomas Kretschmann as the Berliner Ritter speaks English like an archetypal American. If you are going to buy into the Streep Effect, at least be consistent. For the most part, the first-person quotes annoy. The exaggerated English might pass muster on the page, but it is somewhat disturbing in conjunction with the stunning images that have survived against the odds.

The Floreana tale and information gleaned from direct descendants and Ecuadorean historians make for a very full plate, a complete, satisfying meal. I’m not sure why Goldfine and Geller felt the need to add more to this self-contained complex story of intrigue by adding contemporary interviews with longtime residents of the neighboring island of Santa Cruz, stretching the subject to a vague search for paradise. Then why cut it off at Santa Cruz? Because it’s nearby? Now the title makes no sense.

Paradoxically, the film is both too broad and not broad enough. We now have additional shots of birds and tortoises and vegetation but in color, which makes the fabulous old footage seem quaint. Kudos to Goldfine and Geller—no one appreciates the value of Hancock’s film more than they—but I think adding on threatens to undermine a very particular nobility that has doggedly persisted for four decades.