The Limits of Supernatural Subversions: Under The Skin and A Girl Walks Home Alone At Night 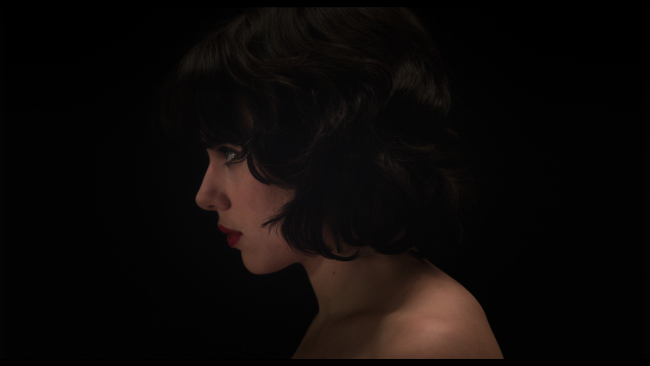 by Sarah Salovaara
in Filmmaking
on Apr 3, 2014

A Girl Walks Home Alone at Night, Claire Denis, Under the Skin

As far as premises go, Under The Skin’s most alluring intimation of Scarlett Johansson rolling around the slick Glasgow streets, seducing men left and right, is actually not as titillating as it sounds – unless you’re one for inverted gender plays (not for nothing is she perched behind the wheel of a predatorial white van). Each would-be sex scene instead succumbs to alien interpretation. As smoothly as she rolls down the car window, inquiring after irrelevant directions, Johansson’s Laura takes the man in question not to bed, but to another dimension. She moves backward on her heels through a stage encased in gelatinous black, instructing him to “come to me,” as he sinks deeper into the tarlike floor, the suffocating substance at his calf, his waist, his mouth. It’s an encounter so visually and aurally appealing (Mica Levi’s soundtrack has been on repeat for the last ten days), you care little for its practical entry point, though the end of the film gifts it for good measure.

Glazer is free to trot out this sublime sequence for as long as Laura fulfills her blood lust, or, until one passenger throws a wrench in her works. Feigning disorientation as is her custom, Laura invites this peculiar hooded figure into her van. Closer inspection reveals him to be a ghastly thing, born of The Elephant Man school of deformation. As Laura gets an eyeful, she graduates from an innocuous exchange to a more human consideration. When was the last time he had a girlfriend? When was the last time he touched someone? Would he like to touch her? We sense pity if not empathy in her tone. She knows she ought to do something for this creature, care for him where others have not. When the time comes to lure him into that black, cavernous suck, Laura cannot do it. Her emotions, those peculiar human things, forbid her. Instead, her omniscient henchman who zips round the countryside on his motorcycle is left to finish the job.

From here, Laura’s entire being is dismantled. What’s under the skin is overpowered its very guise. Once those intrinsically female emotions have taken hold, the scenario is subverted yet again. No longer an insatiable killer, Laura finds herself kept from the cold at a stranger’s cabin, where they embark on a reticent romance. When the time comes to consummate the relationship, we are not ushered into the standard supernatural limbo, but remain hitched to a rickety twin bed. There, something is amiss. Finally presented with sex and not just an unfulfilled promise that precedes death, Laura physically cannot receive the man. All she can do is leave him with that familiar smear of blackened goo across his groin.

The true hook in a film chockfull of them hinges upon Laura’s newfound humanity –more precisely, her womanhood. It is her sudden maternal, empathetic nature that strips her of her power over the men, replacing murder with the more traditional want of a compassionate connection. In prescribing very human characteristics to a very otherworldly being, Glazer topples Laura’s predetermined task of killing indiscriminately: the reason for existence. No longer just encumbered with a body not her own, the alien must shoulder the flesh’s feelings as well. Of course, this disarming introduction of femininity as a means of diverting the narrative is no unique concept.

Ana Lily Amirpour’s rich genre stew A Girl Walks Home Alone At Night enjoys its own subversion of a supernatural character, only to humanize her in the end. Like Laura, The Girl (Sheila Vand) exists to sink her teeth into men, which has less to do with taste and more to do with preying on the predator. She stalks the local pimp after watching him manhandle a prostitute in his car, then glides to the same woman’s rescue when a client tries to pump her veins full of heroin. 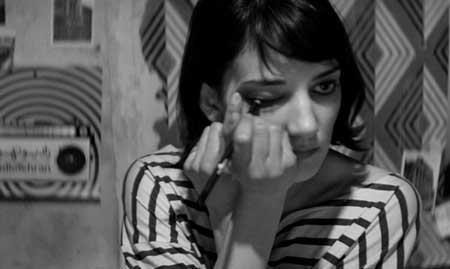 In her basement apartment, i.e. lair, The Girl favors a modest disguise in a stripped tee, imbibing loud pop tunes by the gallon, but dons a skateboard and floor-length hood – an empowering play on the hijab – for her nighttime excursions. Mysterious though she may be, her motives are never called into question. That is until her love interest, Arash (Arash Marandi), the film’s good-hearted centerpiece, detracts from her vigilante duties. Inconceivably reversing her killer DNA to accommodate the more feminine inclination of romance, The Girl abandons her anointed role for a ride to happily ever after.

For her first film, Amirpour proves a magician when it comes to melding tones – if she wants to modulate her vampire-western into a romance, it’s all the more power to her – I only question whether the change comes from within the character, or its creator.

Claire Denis manages to resist this character pitfall cum plot twist in her essential vampiric excursion, Trouble Every Day. Denis cleverly introduces both Coré (Béatrice Dalle) and Shane (Vincent Gallo) with spouses, such that any divisive human impulse for coupling is already removed from the equation. Instead, the two are free to remain true to their natures: Coré more overtly so, whilst Shane struggles to repress his for the sake of marital bliss, which, contextually speaking, acts as yet another gender reversal. The technical twist is still there once Shane’s impulses are laid bare in the wonderful locker room scene, but it’s a release whose catalysts are explored in detail throughout the film, from Shane’s visions to even a pained facial expression.

For whatever reason, all too often is a dangerous woman undone by the external introduction of emotions — those which pave the way to generosity, romance or downfall. Essential as these inversions are to the films’ narratives, I wonder if the outcome wouldn’t be even more thrilling if the shift was as superhuman as the character who assumes it.

Under The Skin is released by A24 tomorrow.