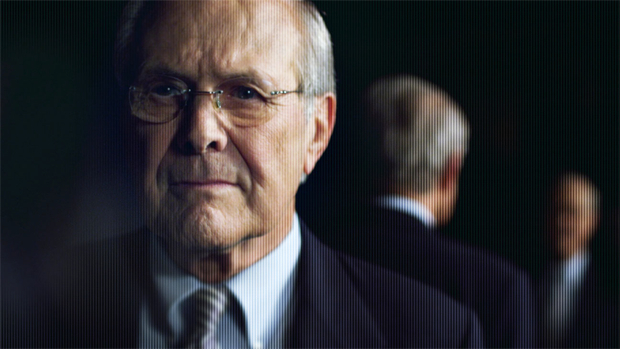 Throughout season one of The Newsroom, viewers could play an idle game before each episode: which recent news item would be put through the Aaron Sorkin wringer, morphing from painful recent incident to an amusing babble of rapid-fire speech set in comfortably familiar rhythms? Sorkin’s been around so long his trademark back-and-forth/walk-and-talk exchanges smack of self-parody even when well-executed. His familiarity/inflexibility suggests a belief that any historical event or dramatic situation can be processed through the writer’s usual dialogue tricks and emerge with a sufficiently revelatory perspective.

The same erroneous assumption underlies Errol Morris’ The Unknown Known, which has expanded nationwide to 80 screens without generating any evident excitement. Once Morris was an mutable enough stylist to synthesize his aesthetic proclivities with his subjects’ interests: his methods were equally suitable for Stephen Hawking (who recently spoke with Filmmaker about A Brief History Of Time) and Robert McNamara. It’s arguable Morris has stretched himself too thin since 2003’s The Fog Of War: understandably and admirably perpetually hustling, the director of a thousand-plus commercials is now also effectively a full-time writer, regularly pumping out philosophical digressions and eccentric journalism for The New York Times. He’s now not so much a director as a full-time emissary and spokesperson from the documentary world, almost instantly ready to share an authoritatively-worded diatribe on The Image And Truth or whatever the topic is; imaginative filmmaking seems to be low on his agenda. (Why fuss too much over a movie if he can expand on it at indefinite length in print later on?)

Over the course of his last three films, Morris has assumed that a recognizable style is interchangeable with an ethical/political POV; in his case, that’s no longer true. The too-aptly-titled Standard Operating Procedure’s lugubrious sobriety seemed defensive, its visuals devoid of imagination for the sole purpose of avoiding “too soon” accusations of bad taste, while 2010’s Tabloid was slight enough to be instantly forgettable, as if Morris decided to expand an amusing short to feature length before realizing too late there wasn’t enough material to justify the effort.

The Thin Blue Line was a one-off in terms of investigatory verve: Morris is generally in the business of supplying a lens for viewing familiar materials. The director’s been widely raked across the coals for both the even-more-evident pointlessness of his exercise (why film, once more, the non-apologetic self-righteousness of a widely despised public figure?) and his failure to sufficiently condemn Rumsfeld. On the latter front, I’m not sure how much clearer Morris could be: you don’t need a four-part supplementary essay series to pick up on his disapproval. A shot of the sun dawning on the White House as Rumsfeld blithely muses on why “they” (i.e., Iraq) didn’t do “more” to stop the war makes clear who Morris thinks is really accountable on that front. As far as pointlessness goes, there’s something appropriate about a major player of the one of the less loved administrations in recent memory getting a feature-length opportunity to parade the banality of its members’ disconnect from how the world perceives them.

But even if Rumsfeld had gotten on his knees and begged for absolution from the general public, it’s doubtful the film would add up to much. Morris’ visual imagination and penchant for imaginative lyricism is on auto-pilot, visualizing Rumsfeld’s copious memos, known as “snowflakes,” by repeatedly returning to the image of a snow globe. The Unknown Known picks up where Standard Operating Procedure left off: more head-on interviews, more slo-mo, less archival footage deep cuts than previously, more of Danny Elfman’s seriously ill-advised Philip Glass pastiche. Why not a new style rather than hiring someone to ape a past collaborator? That’s the exact problem repeated on every level. The Interrotron used to summon the uncanny effect of unbroken, sustained eye contact with eccentric subjects. Now it’s just a tool to repeatedly catch Rumsfeld vacantly grinning, apparently under the delusion he’s exuding avuncular overtones: a creepy image returned to with a lazy punchline’s tendency. Once Morris had an exploratory working method: now he’s just got a template.