Spell of the Cat People 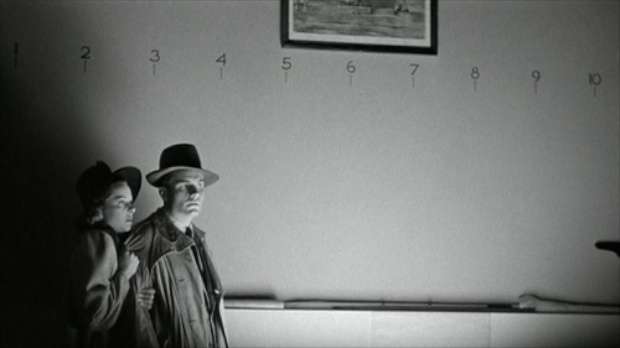 I was watching TV late at night, in a motel room. Having been on the highway all day, I just wanted to get the speeding landscape out of my face and eyes. I searched through the channels for something that had some gravity to it. Something that would pour molasses all over the spinning tires in my mind. Jacques Tourneur’s Cat People had just started. Within a minute, it had blasted the day away, and rolled me like a black-and-white wave. Soft, hypnotic, thunderous. The movie came out of the TV, went into my head and then down into my feet.

What is that quality some films have? Where the movie’s atmosphere is so thick, every scene feels like it’s been shot at the bottom of the ocean. The air carries a concentration. The trees and buildings are as alive as the actors. It’s an invisible butter soup, and just by watching it, we enter into that soup. Then the movie theater, or the motel room, or the living room — they too become thick, soft, alive, malleable. The screen and the room blend together. No bones.

Cat People was supposed to be a B horror movie, and it was shot low budget. But budgets cannot create a nebulous glow. Small budget or big budget has no consequence on whether a movie has that dense, pervasive aura. You can watch Scorsese’s Mean Streets, which was made for just 300K, and the undercurrent of the movie is so intense, it’s almost impossible not to be sucked in. But the huge DiCaprio movies that Scorsese has done have almost no flavor at all. They are reed thin in tenor, all on the surface. They have the quality of canned peas.

Sometimes butter soup movies are called auteur films. Night Of The Hunter is one of them. Charles Laughton slows down time and invests everything in the picture with the same morbid and trance-like hopefulness. Nothing is accidental. Even a child actor’s overacting is perfect because the movie takes place in the zone. It goes beyond right and wrong and just sits there, swaying.

Because atmosphere is impalpable, to speak of this aspect of movies is like speaking about secrets. Open secrets. There if we look, not there if we look with just our eyes. No film society can tell us which movies really carry with them this weighty amorphousness. We can only see it, or not see it, for ourselves. We can pretend we see it in everything we’re supposed to see it in — like Godard movies, or Jarmusch movies, or Kieslowski movies — but we’d only be cheating ourselves if we pretended. Only be cheating ourselves if we took other people’s word for it, too. Especially the word of New York intelligensia tastemakers, who by their nature are prone to pretentious hi-falutin crapola.

Some filmmakers try to manufacture atmosphere. In Malick’s To The Wonder, he does away with story, character, and plot. I would too if I’d mastered atmosphere the way he had in his previous films. Those films’ very textures are riveting. But instead of a Coltrane solo, with To the Wonder we get a mole imitating a bird. The director, freeing himself of forms, ends up clinging to other stuff. The floating camera moves, the cheekbones, the ornate religious poetry, the obsession with a certain type of beauty that’s not far removed from magazine beauty. It’s a movie utterly lacking wonder.

In A Lonely Place, by Nicholas Ray, shouldn’t be the most potent noir of all time. It doesn’t have particularly sharp twists. The dialogue is no better than many other noirs. Gloria Grahame is great, but Jean Simmons and Patricia Neal were great in noirs too. What makes In A Lonely Place so different are the intangibles. The low low altitude of it all. Clouds are classified according to altitude. Movies are clouds. Lonely Place is both more real and more dream-like than other noirs. The stakes feel way beyond art or artifice. Bogart and Grahame actually seem to be battling for their lives. The mood is so heavy, it rains blood all over itself. The movie clicks, and then it never stops. It goes into some kind of automatic darkness, where every moment drags us further and further out of our intellectual perceptions and into a deep black bath tub abyss. The filmmaker transmits such a brilliant and broken heart that the movie physically hurts. Everything in it, even the cars, have broken hearts. You can die watching it.

Invisible butter soup movies can’t be made with tricks. The filmmakers have to actually go there, with their bodies. When one watches On The Waterfront, Brando and Eva Marie Saint walk in this soup. A cold, bright, Hoboken day is illuminated by Kazan and the actors and the cinematographer and the crew and the extras. We can feel the freeze of winter, in our teeth. The filmmakers were so relaxed and focused that the location was sparked into life. Well, science tells us that everything in the universe is alive. Playground swings, garbage cans, smoke, dead leaves, celluloid grain, benches, a dropped glove. These things are all alive, always. But some movies help us open our eyes to that, or refresh our eyes to that. So that when the train leaves the station, there are two lights on behind. The blue light is your baby, and the red light is your mind.