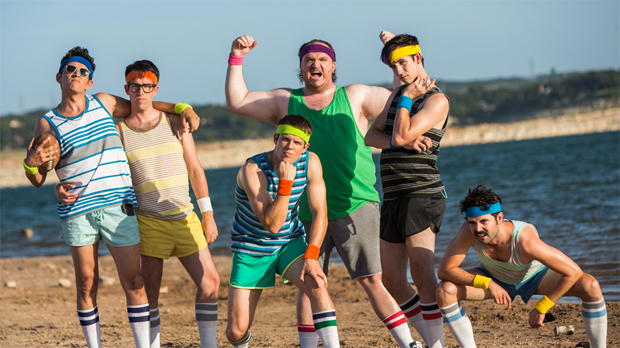 Take a look at Andrew Disney’s website — with his commercials, music video work et al. neatly assembled in their own sections — and you’ll see a very well-organized director adept at representing himself. An NYU alum, Disney (yes, he’s related, though not closely) made his feature debut with 2011’s Searching for Sonny, shot in his hometown of Fort Worth. Now an Austin resident, Disney returns with Intramural, a comedy of arrested development about a group of friends who get their fifth grade football team back together. Pitched as being in the vein of Wet Hot American Summer and Hot Rod, the production raised over $50,000 on Kickstarter. In advance of the film’s world premiere on Saturday, Filmmaker spoke with Disney about working in Austin, the test screening process and loving sports.

Filmmaker: What did you take away from your time at NYU?

Disney: My favorite classes were probably the film analysis classes. I feel like the way they taught how to look at film, how to analyze it, how to break it apart. Whenever I think of NYU, I think of this idea of the film’s language, that what you can do with the camera and the editing communicates the same way that language communicates to people. I feel like there I had this idea that film is like a machine, this big machine that you’re creating, an emotional machine that can make people feel in certain ways. When I look at other films, I look at them as these grand, sort of Rube Goldberg machines.

I think before I went to film school…I mean, I’m such a fanboy. I think my favorite movies growing up were Indiana Jones, Star Wars, Back To The Future. I really loved movies, and I think it wasn’t until film school that I could just break them down. “OK, OK, now I understand what’s happening here.” I see myself in a class watching The Godfather and seeing the parallel action scene between the baptism and when they’re taking everybody out, understanding “OK, this parallel action, that’s the language making all these correlations.” I don’t think before film school I could really explain what makes something work.

Filmmaker: Having grown up in Fort Worth and gone to NYU, what led you to set up shop in Austin?

Disney: I think I moved away from New York just because it felt like it wasn’t the most conducive place to be filmmaking. There’s high overhead. I wanted to be somewhere that was cheaper and I just felt like I had more of a home base, I knew that if I wanted to make something in Texas, I knew lots of people I could call on and get favors. Like for Searching For Sonny, we had this crazy scene with an airplane on a tarmac and I knew in Texas I knew certain people that we could call in favors and get that for free. So I think for indie filmmakers it’s important to think “OK, I’m going to make a film, what’s the easiest way that I can find the money, find the friends, find the favors, I can do it the cheapest, easiest way.” I think that’s where you should be if you want to direct, the easiest place to make your first feature.

Filmmaker: With so much filmmaking going on in Austin, do you feel like internet-oriented comedy is on a separate track from other kinds of productions?

Disney: I wouldn’t say it’s a different track. I feel like everybody is very appreciative of everything. I love the Austin Film Society. When we were doing Intramural, we had all these test screenings at the Austin Film Society and had lots of different Austin filmmakers from very different genres coming out and watching our film. It’s called the Narratives-In-Progress program. It’s an awesome, awesome program where you apply and they give notes. We probably had five test screenings just because for comedy it’s so important, because it’s so hard to know what’s really funny and what’s not, because there’s always jokes that I think are funny that don’t work. And then there’s little jokes that none of us thought were funny or thought, “That’s eventually going to get cut,” where it’s like “OK, that’s not going to get cut now.” I did a couple of test screenings on my first feature, but on Intramural I did more. Test screenings for a filmmaker are a little scary, you’re showing your film before there’s a proper sound mix or anything, and it’s a scary prospect. I got the idea when I read that Paul Feig did it for Bridesmaids. For my next films I always want to do that.

Disney: I’m awful. My background is that I was the kid with asthma who always got picked last. I was not good at sports, but I feel like now I have a deep appreciation for sports. I play fantasy football every year, I’m very competitive with my friends, I’m a huge Dallas Mavericks fan, I love the Cowboys. Fantasy football, Bill Simmons and Grantland, 30 For 30, I think all those things have made it OK for nerds or people who wouldn’t normally get into sports to become sports fanatics.

Filmmaker: How much guiding influence did you have on the Kickstarter and social media awareness side of the production?

Disney: I was pushing the production forward more. Our producer Andrew Lee is a mastermind at social media and Kickstarter, all that stuff. I definitely had my two cents and helped out. It was a fun social media campaign we did. I think with Kickstarter, the people that come and give money to you, those people becomes like your best fans throughout the whole process and they kind of become fans for life of your movies. I love Kickstarter.