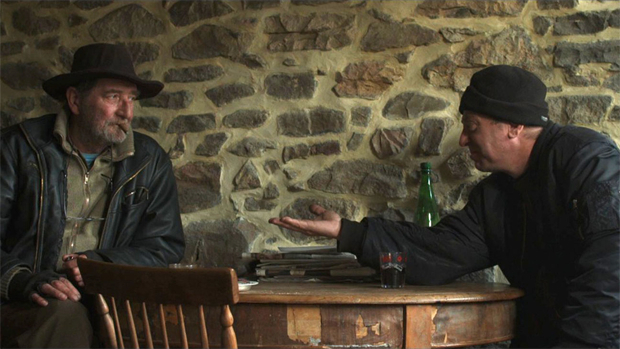 Sabine Lubbe Bakker and Niels van Koeverden’s Ne Me Quitte Pas (Don’t Forget Me) takes its name from a Jacques Brel song whose fervid tone fits its disheveled subjects well. Marcel and Bob are best friends: deep in rural Belgium, they wile away their hours in a drunken haze, footage that straddles a productively uncomfortable tragic-comic line. Marcel’s wife leaves him at the beginning, which gives him more time to spend with older, more grizzled, seemingly more resigned Bob: their epic drinking bouts regularly punctuate the film, getting into more and more dangerous territory as spiral downward and, unnervingly, take to the road. A portrait of mutually enabling friendship shot in unblinking widescreen, it’s an uneasily comic/sobering experience. In advance of their North American premiere tonight at the Tribeca Film Festival, Filmmaker spoke to the duo about the ethics of filming drunkenness, crowdfunding and the appeal of ruthlessness.

Filmmaker: How did you find Marcel and Bob?

Koeverden: We are both raised in Belgium, and we wanted to make something about the fact that Belgium didn’t have a government for nearly 600 days. We started a road trip, but the first thing we did was we visited Bob because I know him already 10 years, he was one of the characters in my first film. We went there to shoot this political story about Belgium, and when we came to the village and we started shooting –

Koeverden: We knew that we had to lose the whole story about Belgium and we had to focus on their story. So we just decided to stick around.

Filmmaker: I heard that audience members get angry with you if they think you’re enabling them or that you’re endangering people by filming them driving drunk. Did you anticipate that?

Bakker: Not at all.

Koeverden: And it’s maybe the other way around, in the sense that they demanded from us to treat them in the same way as they treat each other. It’s not like we asked to drive drunk on the motorcycle, they just demanded from us to let them drive drunk on a motorcycle, and it was up to us to decide whether we wanted to film that or not. For this particular scene, we weren’t maybe that sober that night.

Bakker: People can be angry at us, but if we don’t film it it doesn’t mean that these kind of things don’t exist anymore. If you’re angry with us, that’s fine. Some people get very sad about the film, which is also fine. I mean, we also get sad while we were making it, we also got angry, but it’s also very funny.

Bakker: Like Waiting For Godot. They have each other and they wait. They’re existing.

Filmmaker: Early on Marcel is weaving and he hits the camera head-on. When you were shooting and knew they were going to be drunk and you were going to be fairly close to them, how did you decide where to position yourselves?

Bakker: And we didn’t mind so much if he was going to bump into the camera. I mean, it is what happens. You just try to do it as good as possible.

Koeverden: I also think that the thing we spoke about is that we didn’t want to be in the film, but sometimes a small sense of us being there is nice, to not totally close the wall in a way.

Filmmaker: How did you explain the approach you’d be taking?

Bakker: We told them about Waiting For Godot. I think we told them we liked their friendship.

Koeverden: We also really love those guys. We didn’t tell them that much, basically. We told them when we were going to come and for what, so basically we were there for two years, one week a month. Every time we came we had a specific goal for one scene, that they go to rehab or to a birthday or something. We would search for something or let them surprise us with scenes.

Bakker: I think they knew us more than what we were making. Also I think they knew a lot of things about how we look upon life and what we like about them. We spent many nights, days together, dancing, talking, drinking. I think this was the approach, that we wanted them to trust us, not the film. I mean, we are the ones making the film.

Koeverden: Which was really easy with Marcel, but sometimes a bit difficult with Bob, because he’s really more aware. He read a lot of books, he traveled the world, he’s seen movies, he knows what editing can do, so he needed a bit more guidance and idea of what the movie would be about.

Filmmaker: You raised initial funds through cinecrowd.nl (the Dutch Kickstarter). At what stage is the science of crowdfunding like in Belgium at this point?

Koeverden: We were the first documentary project on the website. It’s getting more popular. I think for us, more than the money, it helped us with enthusiasm and people behind us and backing us up.

Bakker: Crowdfunding is a full-time job, and in Europe it’s for very small amounts, I think we got 10,000 Euros or something. So it’s definitely not enough, but it’s a really nice way to get started. But I don’t know if we would do it again. It’s a lot of work for a little money.

Koeverden: At one point we just borrowed money from the bank and bought equipment, and that’s easier because you have responsibility towards yourself, not towards your friends. Here if you do a Kickstarter you get a lot of money from people you don’t know, but 80% of the money we got was from family and friends.

Bakker: At every family party, every time we went to a bar, we had to talk about our project.