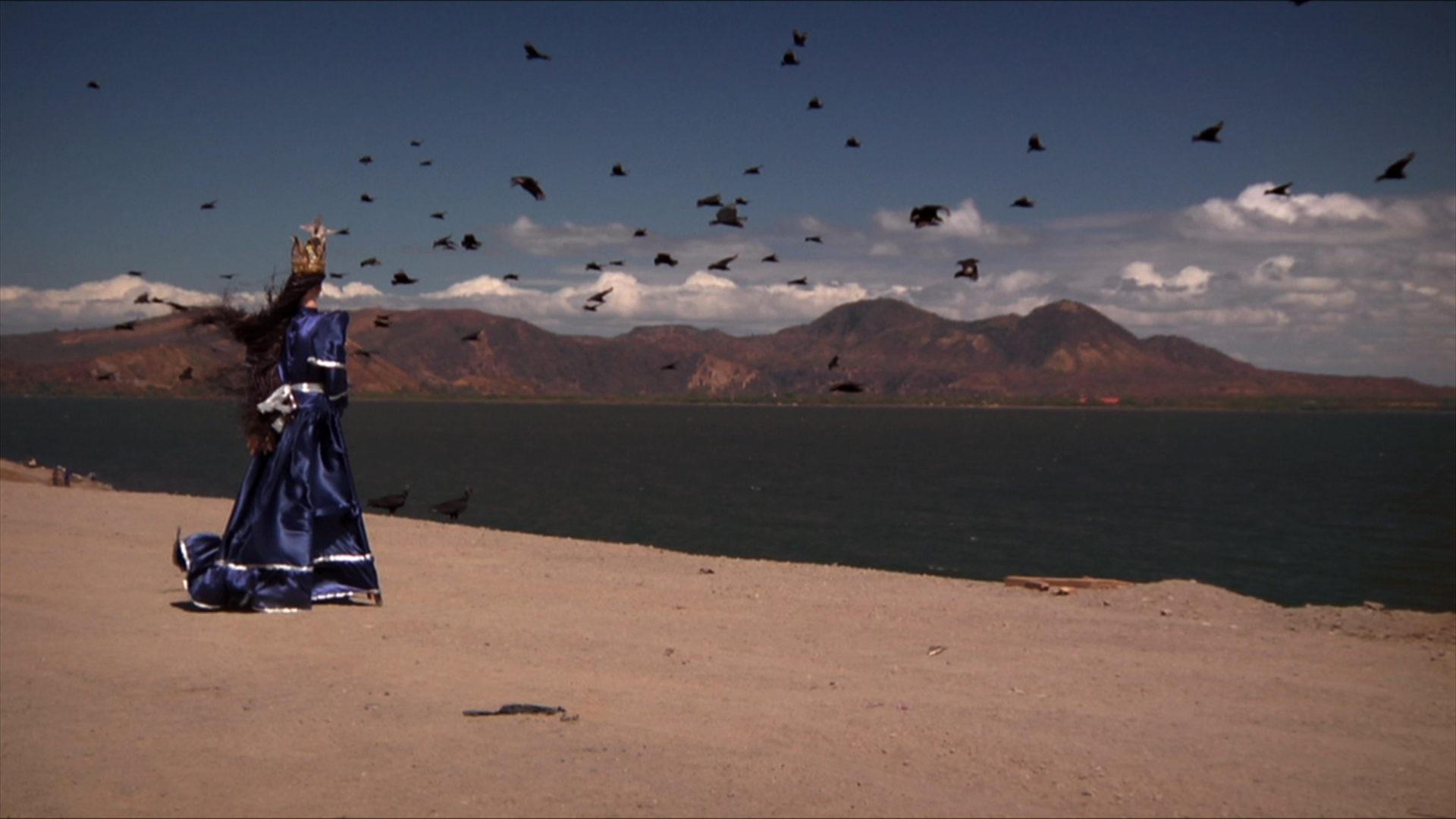 Inside out …
Upside down …
And round and round
“Upside Down” (1980), Nile Rodgers and Bernard Edwards

The wildly suggestive lyrics are sexy all right, but they also suit the vertiginous push and pull (sorry) of Mercedes Moncada’s intense cinematic duel between a) the history and legacy of the Sandinista movement in her native Nicaragua; and b) her recollection of the heavy emotional baggage she has carried since its inception. The description of a political event or a collective mood may trigger remembrance; inversely, affective recall might precipitate concrete reconstruction. The logic of memory rules, so that the order of topics she addresses — though never scattershot — is rarely linear.

Another reason a refrain from a number one pop song is a suitable opener for an overview of this deceptively complex masterwork is because it’s stuffed, in the best way, with perky Latino music and wildly colorful rallies, parades, and processions. No matter that the Nicaraguans have endured nearly unthinkable tragedy, no matter that Moncada has been traumatized by the emergence of brutal domestic opposition clandestinely supported with American money (remember Iran-Contra?) and from the 180-degree turnaround by the original revolutionary leadership.

Essentially a garbage dump on the outskirts of the capital, Lake Managua becomes a stand-in for the Sandinista era. Before the first image, there’s a quote from Paul Claudel: “The water is the eye of the earth, its instrument for looking at time.” After a few shots of this placid body of green filth, Moncada announces in voiceover, “I am like the lake. I keep and accumulate.” The corpse of guerrilla leader Augusto César Sandino (whose name the Sandinistas appropriated) was eventually dumped into the lake. He had been murdered in 1934 under the order of National Guard leader Anastasio Somoza García, whose harsh and corrupt dictatorship was carried on by his son, inspiring revolution in 1979: Year Zero in this artfully structured doc.

Rodríguez becomes our vocal guide for following the intricate markers and connections in modern Nicaraguan history. You could make a case for drawing parallels and distinctions as measures of temporality between the visually prodigious director’s own eye or the camera’s lens, on the one hand, and the lake itself on the other. To make clear early on that Magic Words is a synthesis of social history and the inner workings of her mind, Moncada intercuts archival footage of testimonials against Somoza by ordinary people with reflections on her memories, visualized as abstract dreamscapes.

A carnivalesque female statue atop a tall pole, first introduced beside the lake, is a recurring buffer between the historical, the personal — and occasionally, the mythological. She wears a deep blue dress, exaggerated red lipstick, and a high sequined gold crown. As the film moves along, she suddenly appears out of nowhere, an inert presence at outdoor gatherings like a packed Santo Domingo festival procession or during one of the director’s interior monologues. The statue is a mute witness to all — inside out, upside down, and round and round. “When we do not find the right references, we walk in endless circles,” Moncada says.

The innumerable cyclical repetitions in contemporary Nicaraguan history fit neatly into the atemporal narrative. The humor inherent in their irony often makes it difficult not to chuckle at these cases of humanity at its greediest and most treacherous. During his dictatorship, for example, Anastasio Somoza Debayle ordered the government to buy cobblestones from his factory to pave the streets of Managua; by 1979, rebels would be throwing the same stones his way. In 1982, the revolutionaries were challenged in a brutal war by the Contras, as Moncada puts it, “the guardians of the old regime.” In 1990, Ortega lost the presidency to Violeta de Chamorro. “I felt as if the floor collapsed under me when the Sandinistas lost the election,” she says.

The Sandinista leadership ended up turning their backs on their own people, just like the Contras had before them. Before handing over the keys to the palace, they plundered what they could and created a new elite out of former revolutionaries. Here is a copycat fraud: Following the devastating Managua earthquake of 1972, Somoza amassed a huge fortune off the displaced bourgeoisie. In 1998, years after the revolutionary fervor had subsided, President Arnoldo Alemán, of Somoza’s party, did the same after Hurricane Mitch hit the country. (After he was imprisoned for money laundering, he made a deal with Ortega that enabled the latter to once again take the presidency.)

Two fairly linear sub-strands rear their ugly heads and purposefully pop the dominant dreamlike and circular modes. One is the path taken by young males from Year Zero until the present; the other is the via Dolorosa of the young female. Except for a brief anticipatory sequence of a gaggle of contemporary male youths (crack junkies all, their faces blurred-out) and a similar insert in which they chat adoringly about guns, the story of the young men begins “eight months after Year Zero,” when wide-eyed idealists not only enjoyed collective festivities but also enthusiastically formed squads to educate peasants, and labored in what they called “an agrarian revolution […] and other forms of non-exploitation.”

When the Contras emerged three years later, Moncada recalls that “even the boys my age had to go into military service.” She was then 11. Yet the barely pubescent recruits saw the defense of their country as their duty; archival footage shows their fervent dedication. They managed to assuage the scars of battle with music and, in one touching scene, a male-to-male dance within a circular formation of fellow combatants. For Moncada, the flip side was a revised meaning of mortality, as coffins of these young fighters were unloaded from trucks surrounded by grieving families: “Death ceased to be heroic and fruitful. It is death, nothing more.” By the ‘90s, there was a plethora of aimless, largely unemployed young men who had grown up with violence and had first-hand knowledge, if not possession, of weapons. With no outlet, the youths shared fond memories. Gangs formed. After Ortega regained power, those in security positions at rallies acted out violent tendencies in the opposite way from which they were trained. The devolution was moving steadily downward.

Unlike the young men, the women in Nicaragua became — in the words of Ortega’s stepdaughter Zoilamérica Ortega Murillo — “immobilized” by the revolution. That conclusion can be extrapolated from Murillo’s description of her stepfather’s illicit actions and how he justified them. In 1998 she went public with the accusation that Ortega had sexually abused her from the ages of 11 to 31. She claimed he told her it was her obligation “to take away the stress so that he could make revolution.” Her biological mother, Ortega’s wife, supported the president. “It did not hinder his political standing in a country where sexual abuse is rampant,” Moncada notes.

The reference to Ortega Murillo’s finally coming out about what had been repressed — tied in as it was with the male-dominated political hierarchy — stamps the film as a feminist treatise (among other things). We begin to comprehend the connections between the statue, the director, and the film’s resolution. As Moncada says:

Even the most powerful spells find their strength in deals made in the dark, in secret, in the unnamed. They begin to fade when talking about them, and are useless when they become words spoken and heard.

Moncada is an anything-but-silent witness. Now we fully understand the meaning of the title. The convergence of historical repetition, personal memory, and short pieces on the underwhelming destinies of young men and women under the Sandinistas is a function of Rodríguez’s new-found capacity to speak about and visualize what has transpired since 1979.

So much has changed in the interim. At the beginning of the revolution, for example, she viewed the revolutionaries as saints and “imagined the new man and woman.” Following the penultimate scene of lapping waves in the scum-ridden lake, the last sequence — archival footage of musicians loudly and proudly playing brass, horn, and guitar and a spirited crowd chanting a dance-inducing number (“Long Live Free Nicaragua!”) — might appear ironic, depressing, or ambiguous, considering the horrors we’ve encountered onscreen. But coming as it does soon after Moncada’s personal awakening rips through the stifling cycles of conflict, the enticing finale is without a doubt a promising coda, a musical rendering of hope that, without hoodwinking, diminishes just a wee bit everything that has come before.

Magic Words (Breaking a Spell), which opens the exhibition Iberoamerican Images: The State of the Art, begins a one-week run at MoMA May 1.