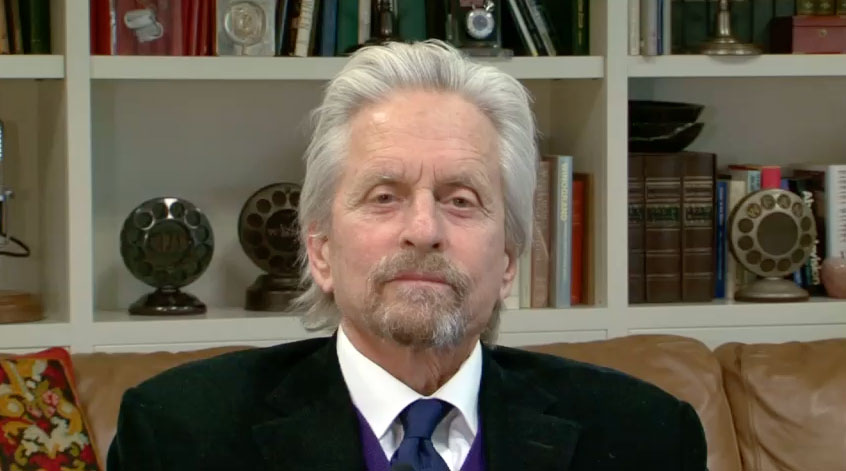 Actor Michael Douglas pays tribute to legendary producer Saul Zaentz (The English Patient, One Flew Over the Cuckoo’s Nest), who passed away earlier this year, in a video presented last week at the New York launch event for “Make Your Mark,” a short film competition for emerging film producers by the Producers Guild of America and Cadillac. Douglas serves as one of the competition’s judges and will help select the winning short film, an excerpt of which will be screened in a :30 Cadillac spot appearing on next year’s Academy Awards broadcast. Douglas made the video statement for the event, which was co-hosted by Doug Ellin and attended by fellow judge Danny DeVito. Of Zaentz and the contest, Douglas said, “I am deeply honored to be asked to serve as one of the judges of this contest, and I’m sure that the work that comes out of this competition would make Saul proud.”

For contestants, the competition involves making in 51 hours a three-to-five minute short film inspired by the work of Zaentz. Those shorts will be judged and then ten finalists will be invited to submit pitch packages to make new short films. Three finalists will be selected, flown to L.A. and given $30,000 and a professional producer as a mentor. The resulting three shorts will be judged and a winner will have their name and short features in the Oscars spot.

To become eligible for the contest, producers must register at the website and pay a $100 entry fee, the proceeds of which go to the Producers Guild Foundation, a 501(c)3 charity.

The complete press release is below:

WINNING SHORT AND PRODUCERS NAME TO BE FEATURED IN CADILLAC’S :30 SPOT DURING THE 2015 OSCARS®

Make Your Mark Competition Spotlights the Role of the Film Producer

NEW YORK, NY – The Producers Guild of America (PGA) and Cadillac are pleased to announce the start of Make Your Mark – a short film competition open to producers nationwide. Participating producers will compete for the opportunity of a lifetime – a portion of the winning short film and the winning producer’s name will be featured in Cadillac’s :30 spot that will air on ABC during the Oscars, on Sunday, February 22, 2015. The competition honors the work of renowned Academy Award® winning filmmaker Saul Zaentz (“The English Patient,” “Amadeus,” “One Flew Over the Cuckoo’s Nest”), who passed away earlier this year. Zaentz’s passion continues to inspire the next generation of industry-defining producers through the Make Your Mark competition.

“I am deeply honored to be asked to serve as one of the judges of this contest, and I’m sure that the work that comes out of this competition would make Saul proud” said Michael Douglas, a Make Your Mark competition judge.

“The PGA is dedicated to supporting and celebrating all types of producers in the entertainment industry,” said Mark Gordon and Hawk Koch, Presidents of the Producers Guild of America. “Make Your Mark is an exciting opportunity for both members of the PGA and non-member producers to work with some of the most talented personalities in the industry and to showcase their short film to the world on the most distinguished night in Hollywood.”

How to participate in Make Your Mark:

Starting today until 11:59 p.m. EDT on June 25, 2014, contestants can enter the Make Your Mark competition at makeyourmarkcompetition.com

Once accepted to the competition, entrants will be asked to create a three-to five minute-short film that draws upon the storytelling and work of Saul Zaentz.

Rules and creative specifications will be released on June 27, 2014 at 5:00 p.m. EDT and contestants will have 51 hours to complete their short film.

The three finalists will collaborate with a distinguished PGA mentor to produce a further refined three-to-five-minute short film.

The winning short and producer will be announced on January 24, 2015 at the 2015 Producers Guild Awards.

The winning short will be highlighted in a :30 second Cadillac spot that will appear during the ABC broadcast of the 2015 Academy Awards.

“The Producers Guild of America and Cadillac are both looking to enable and celebrate achievement,” said Uwe Ellinghaus, Global Cadillac CMO. “Through our collaboration with the PGA, we are designing a competition for the next generation of producers.”

A $100 registration fee is required and is limited to 500 entries accepted. Proceeds from the entry fee goes to the Producers Guild Foundation, a 501 (c) (3) charity. For Official Rules visit www.MakeYourMarkCompetition.com.

The Producers Guild of America is the non-profit trade group that represents, protects and promotes the interests of producers and the producing team in film, television and new media. Its more than 6,000 members work together to protect and improve their careers, the industry and the producing community by providing members with employment opportunities, seeking to expand health benefits, promoting fair and impartial standards for the awarding of producing credits, in addition to other education and advocacy efforts such as encouraging sustainable production practices. Visit www.producersguild.org, www.pgagreen.org, and www.pgadiversity.org for more information.

Cadillac has been a leading luxury auto brand since 1902. Today Cadillac is growing globally, driven by an expanding product portfolio featuring dramatic design and technology. More information on Cadillac appears at www.cadillac.com. Cadillac’s media website with information, images and video can be found at media.cadillac.com.