Vincent Laforet on Directing, Cinematography and Knowing Your Craft 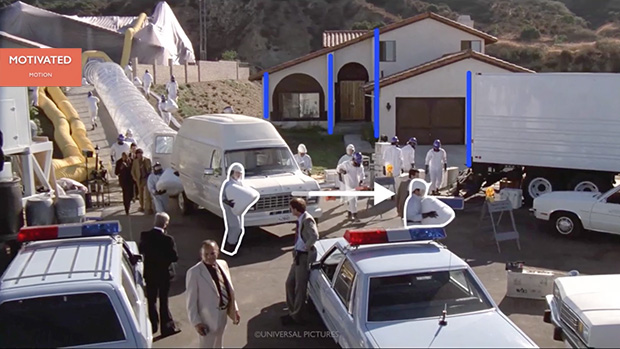 Motion diagram for a shot in E.T. the Extra-Terrestrial, from the "Directing Motion" workshop

by Michael Murie
in Cinematographers, Interviews
on May 5, 2014

Vincent Laforet is a Los Angeles based director and DP who has directed a number of commercials and short narrative films. A prize winning still photographer who has worked for The New York Times, he is perhaps best known for Reverie, the short movie that introduced the world to the video capabilities of the Canon 5D Mark II.

Laforet is currently undertaking a US workshop tour with the Directing Motion workshop, which will visit 32 cities over the next ten weeks. “I knew that there was a hunger for learning about the craft of filmmaking, and I thought this would be the natural next step,” says Laforet. “It’s a look back at everything that I’ve learned and applied, from both my work and working with other directors and cinematographers, and trying to condense that into how it relates to moving the camera and what’s in front of it.”

Laforet spoke to us about how he works, managing film set politics, and the importance of planning.

Filmmaker: How do you go about planning a shot?

Laforet: Everything is based off of a script or a story, and you go off and figure out what the motivation is for the actors. What’s happening within the scene? How does it relate to the story overall? You decide not only the movement of the characters and how to cover that, but you also try to add another layer with motion if that actually helps it along. Generally speaking, in modern cinema, you rarely see stationary cameras. Audiences want to see movement, and it’s really important to have dynamic movement to retain people’s attention. The challenge for a director is to find in a meaningful way — what we call a motivated way — to move the camera with purpose, as opposed to just randomly moving the camera to no effect.

Filmmaker: Do you think there are rules for when and how you should move the camera?

Laforet: There are some rules. For example, if you have a particularly intense scene, it’s important to be able to see the actor’s eye and connect with them. There are times — like in Fargo where William Macy is walking back to his car in that locked off shot on the parking lot surrounded by snow — where the stillness of the camera actually benefits the entire tone of the scene and where moving the camera would actually detract from it.

There are no hard and fast rules per se, ever. I don’t think cinema or art has rules that cannot be broken, but there are some pretty common things that you should follow, or at least be aware of in terms of what’s been done in the past.

Filmmaker: How do you convey what you want to achieve to the cast and crew?

Laforet: I’ve been surprised to find there are a lot of directors and relatively veteran people who still have a hard time communicating clearly and concisely to their cast and crew, and it leads to confusion and inefficiency. I’ve heard a director say, “I would like to follow this actor for the scene,” and they’ll set up to follow him from behind, and then the director says “I meant I want to be in front of him, I don’t want to see the back of his head.” He should have used the term “to lead.”

The ability to communicate clearly and concisely is pretty critical as a director, and that’s one of the things that we cover in the workshop. If you don’t know the basic terminology, how do you expect other people to know what you mean? 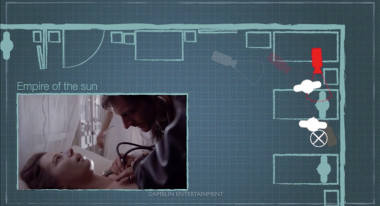 Filmmaker: Do you storyboard much of your work?

Laforet: Yes, I do. I use diagrams, storyboards or shot lists. Especially in commercials, but pretty much for every piece of narrative that I do. Even for more documentary-type work I will storyboard. The idea being that this is when I can sit down in peace, and set some sort of theme or tone or plan to have something happen over time. When I get on set, especially if I’m working with actors, I’ll let them look around and see what they find and see if they come up with some sort of inspiration. And if it’s better than what I want to do, or as good, and it still fits within my overall theme, I’ll actually go with it. What you can’t have happen is you ask an actor if they have any inspiration and then they come back not having anything, and you’re as clueless as they are.

There’s this idea that if you storyboard things you’re not going to be spontaneous on set and things are going to be stiff. The reality is, if you storyboard and you prepare, you’re really much more prepared to be spontaneous because you have a plan and you know how things fall within one another. You’re the only person on set, other than the script supervisor, who actually has an idea of how the sequences of the shots come together, and if you don’t have a plan you’re setting yourself up for failure. I’m a big believer in storyboards, but once I’ve done that preparation, I’m also a big believer in letting go if that seems better.

Filmmaker: You started out in still photography and transitioned to cinematography and directing. What was that like?

Laforet: I was thrilled to work with other people after having worked pretty much solo for most of my life. I thrive on collaboration and working with other people that have incredible skills in their individual realms.

The transition was really interesting in that it is about learning an entire new set of skills. Photography does translate somewhat into directing and cinematography. But there are quite a few more layers involved that are new to a still photographer, whether that’s working with actors, whether it’s understanding motion, the politics, and the budgeting. For me, it’s one of the most fascinating periods and transitions of my life and it took several years until I would say that I actually knew what I was doing.

Filmmaker: What do you mean by “politics”?

Laforet: As a director, there’s so much politics on every different level that you have to be aware of. It’s not just a matter of calling “action” and “cut” or having an idea. It is like being a politician. You’re managing a lot of egos and you’re trying to set realistic expectations and goals. You’re also trying to draw the best out of everybody and you can’t push too far. On a commercial set the politics are possibly worse, or just as bad in that you have an agency and a client to deal with, as well as your crew. You have to manage all of their expectations really adeptly.

Laforet: They’re all different. I used to get frustrated at some of the politics and the conference calls. I’ve kind of learned to cherish them over time and the reality is that you learn to love what you initially hate. It’s like pain: you know when you can’t fight pain, at some point you expect it, and I think for me, dealing with these politics and these issues and having to struggle with budgets — there’s never enough money in any production.

Filmmaker: How do you deal with the limitations of budgets?

Laforet: If you go to a $20,000 production they complain they don’t have enough money, and you go to a $20 million or a $200 million production you’ll hear the director and producer saying there’s not enough money. Because the reality is, no matter how much money they get, they always want to spend more because they want to make it even bigger. You can get frustrated at that, but it’s just part of the process. When you don’t have money, the challenge is to come up with an original idea or solution.

Filmmaker: What advice would you give to someone starting out?

Laforet: I think it’s important not to focus on resolution, cameras, and technical aspects. It’s really important to focus on the craft of directing or shooting. I think a lot of us think that we can buy a camera and call ourselves a cinematographer or director, and the reality is it’s a craft. It’s one of the more complex crafts out there, and it’s a matter of studying your craft, working with others and learning it.