Don’t Read This! 5 Things I Learned about Directing and Shooting a No-Budget Feature Film in an African Village 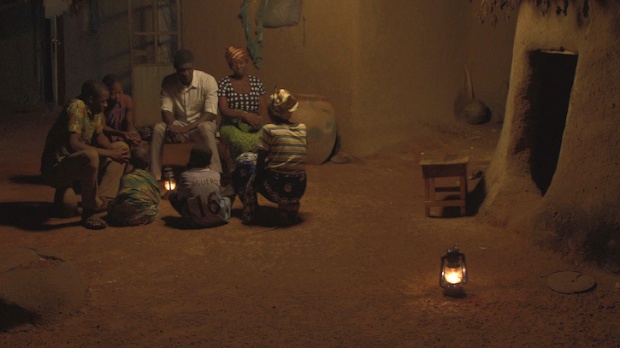 by Travis Pittman
in Filmmaking, Production
on May 7, 2014

I’m not writing this for the careerists. For the ones just looking for an edge, for a way in, who think they have an idea that can sell and are poking for a soft spot in the walled city. If that’s you, you can stop reading now. Hell, just stop.

I’m writing for the hopeless lot who scramble for meaning. Who care about what’s in the box, not the pretty package. Who care about result, impact, and why people and societies do the things they do.

This is why we shot a movie over four months in a remote Ghanaian village with no electricity or running water, slept six to two tiny rooms, battled parasites and malaria and finally came away with a feature film. Some of what I learned…

1. Time = Performance
Without a doubt, the saving grace of our production, and the real secret to bringing high production value to the micro-budget range of independent film, is performance. More than your camera package, more than your lighting gear, more than your honey-wagons (but just barely), this is that indefinable something that separates the strata of cinema — separates a world-class piece of filmmaking from an also-ran. And — technically — it’s free.

What I mean by “free” is that an actor being paid a million-plus for his work can give an equally terrible — or beautiful — performance to the kid you pulled off Backstage looking to pad his reel or the first-timer you saw a spark in. (Incidentally, what you’re really paying the million-plus for is 1 — the HOPE that you don’t have to work quite as hard and 2 — marketability down the line. But if you’re interested in that, I think I told you to stop reading already.)

And guess whose job it is to wring every drop of potential out of that actor? Yours. And it takes time. Time to develop a relationship, time to rehearse, time to understand the assets and limitations of a performer and to be able to adapt YOUR VISION to it. And it was one thing we had on our side filming in the “developing” world. Once we got there, we could afford to stay. But with our entire cast comprised of novice and “non” actors, getting international caliber performances also took a clear and specific idea of what we needed from each shot visually. It took knowing what plays on camera and knowing where the cuts are in a movie that hadn’t been made yet. And with all the prep, conversations on aesthetics, shot-listing and diagraming dedicated to the look of the film beforehand, that took time too.

2. The Extra Mile
It’s 100 degrees. You’ve been on your feet for 10 hours. Some otherworldly stomach bug is twisting your gut in knots. Everybody’s tired and wants to go home. It’s the fifth take of the seventh shot of the last scene of the day. And something’s just a little bit off with the way he said that last line…

I can’t tell you how many times some version of that feeling reared its head on this shoot. Every little thing is screaming at you to quit. And you can’t. Because it’s your movie. And that sixth take could be the one, or it just means you broadening your options in the editing room, or biking that dirt road back home in the dark feeling a little lighter. (Okay, that last one might be specific to this shoot.) You have to step up. And even if you can’t articulate exactly what’s wrong you have to step up anyway. Ask for help, and if you assembled the right group of people around you — people who, like you, care about the final product and nothing else — they will help you.

3. You Just Never Know
At a certain point, making a movie just takes an insane faith. In preproduction, it meant putting one foot in front of the other — making each contact, committing to each date, assembling each piece — with a mindset that those ENORMOUS near-crippling challenges lying in wait — like casting the entire film upon our arrival in Ghana or relying on a massive seasonal change to accord with our shooting calendar — will be solved somehow. Putting those doubts and second-guesses out of your mind is critical, but it doesn’t have to come all at once. It comes from building momentum, from the idea of your film taking a life of its own.

And the very fact that you simply can’t predict where each step will lead is why each one has to be taken with faith and goodwill. Which is an idea that arcs back to some origin way before preproduction, to a decision made during my Peace Corps service to finally spend the day with a friend who then poured me some deadly cocktail of local alcohol and Guinness that plastered me to his floor, the same friend who ended up charging every camera and monitor battery the production burned up and would do anything we asked in a pinch. It arcs back to another ill-advised friendship with a foul-mouthed, amoral, and hilarious econ major who I loved despite myself, and became our most voracious supporter and investor. People, and relationships for their own sake (not for your own self-interest…didn’t I tell you to stop reading?), these are what matter.

4. Flexibility
This is where things get contradictory. (Seemingly.) Remember what I said about having a precise idea in your head of what each shot, each take needs to accomplish? Yeah, sometimes you have to throw that out. Let’s face facts: your movie’s never going to be what you wanted it to be. Okay, stop crying, it’ll be alright. This is a collaborative medium, and when your film enters production it leaves your head. In a very real, literal sort of way, your movie is no longer your movie. (Apologies to Andrew Sarris.)

Letting the actor bring their unique spirit to the part gives a role, and ultimately a film, its vitality. In NAKOM there’s a part I wrote for a small boy, about 8 years old. He was supposed to be a rambunctious, carefree troublemaker, but the actor we cast (his audition and reading of a crucial scene were by far the best) was somehow preternaturally serious. A world-weary old man in an 8-year-old’s body. But halfway through his first scene we were still trying to force the idea of the part as it was written, and it planted a falseness in the performance. We stopped, switched gears, and made a decision to let the spirit of our actor come through. And the film is better for it.

5. Every Day’s a New Day, Every Breath a New Breath
So I have a temper. (The product of an unusual, tempestuous upbringing…I’m a firm believer that environment determines human behavior and nothing is innate. Was that too heady? Stop reading.) It’s been with me a long time but it’s something that got keyed up back in my Peace Corps days in the very village where we shot the vast majority of this film. (The act of trying to integrate and accomplish something in a community while at the same time feeling so inconsolably separate is an overwhelming experience, equal parts frustrating and beautiful.) And I fell back into old patterns on set, wearing my heart, agitation, and stress on my traditional smock-sleeves.

There are lots of kinds of leaders but the fact is your attitude as director is felt by every person on set. The day of our epic staged funeral (funerals are basically ribald celebratory parties in northeastern Ghana), I made the decision to bring my best, most joyful and open self to every situation, scene, moment… As imperfectly as I managed that change, I felt a marked difference in the trajectory of our long production. What’s funny is that the arc of NAKOM’s protagonist, Iddrisu, a whip-smart medical student forced to take on the yoke of village life, is that precise journey from frustration to something like kindness. If only that change in me were as clean and elegant as I can write it.

Essay by Travis Pittman, co-writer and co-director of NAKOM. For more on the film, visit us on Kickstarter as we seek vital funding for post-production.