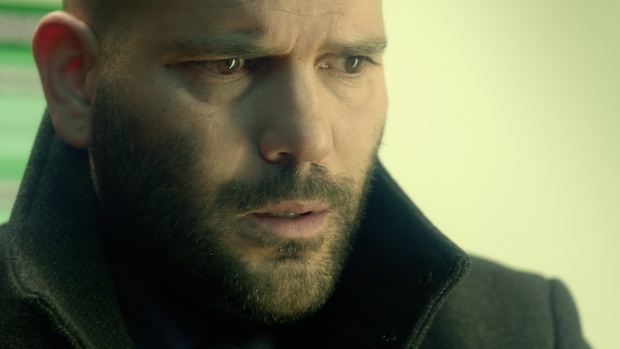 by Scott Macaulay
in Filmmaking, Transmedia
on May 14, 2014

Launching today is the fifth and final season of ITVS’s online series, Futurestates — short films by independent filmmakers “exploring the visions and various challenges of what life might look like in an America of the not so distant future, where automation and artificial intelligence is becoming an even more dominant force in people’s day to day lives.” The series has a different form this year, with the seven shorts all part of one immersive storyworld that is expressed not just through the films but through social media and a striking website by New York interactive specialists Murmur.

Comments series producer Karim Ahmad in the press release, “I’ve long felt that the new opportunity with web series is to really unleash the user experience potential of the web to tell a nonlinear story in serialized form that is guided by the user. Our final season of the FUTURESTATES series does exactly that. This season’s short films by a host of leading indie filmmakers are independent, yet interconnected, and the storyworld design is immersive and mysterious – a puzzle for you to explore, filled with supplementary videos to help flesh out the nature of this futuristic world and offer clues as to how it came about.”

ITVS has selected a strong and diverse group of filmmakers (including three who have appeared on Filmmaker’s 25 New Faces list) to make films dealing with such issues as incarceration, education, therapy and robot labor. The host of sorts is Dr. Evelyn Malik, a character who, through tweets and the website, urges us from the future to chart a different course.

Comments Murmur’s Mike Knowlton about this character, the storyworld and the site Murmur designed, “The storyworld we all created is one where the main character, Dr. Evelyn Malik, has given herself, her life, to make a complete connection between human and machine — the “Sensularity.” The user is literally diving into her mind and exploring the connections between the memory fragments that are revealed via the films and other bits of media. So we wanted to create an immersive environment that looked and felt neurological, digital, and alive, but also imperfect, like memories.

The Futurestates site works as something of a map, with connections drawn from story to story, but its aesthetic is far away from the neutral-to-cheery map views found on our smartphones. Instead, the audio-enhanced site pulses and twitches, like synapses firing in the brain. Continues Knowlton, “The point was to make an experience that is fundamentally non-linear, but at the same time interconnected. The human mind as a spatial metaphor seemed to be a very natural fit for these goals. And while there have been many films that have visualized what the inside of someone’s mind might look like, here we saw an opportunity to also give users more control over the journey itself.”

Tina Mabry, whose Ant deals with a bipolar patient whose gone of his “digitally encoded psych meds,” says she was excited to be able to explore themes personal to her within the sci-fi framework. “ITVS takes a welcomed, atypical approach when it comes to encouraging the unique visions and thematic endeavors of writer/directors,” she writes in an email. “When they asked if I was interested in doing another film, I didn’t hesitate at a chance to put a voice to underserved societal issues that not only touch my community, but also my family.”

Unlike previous years, filmmakers were tasked in this final season not just to develop stories but develop them within a single, shared storyworld. Says Mabry, “When I learned they were changing up the FUTURESTATES series by providing filmmakers with the opportunity to develop an interconnected episode within a single story world, it was a filmmakers dream. It was a much-welcomed chance where I could continue to provide a voice and put a face to marginalized groups’ struggles, cultures, and endurance. The primary challenge dealt with making sure the personal stories from each writer truly connected to the story world we collectively built. Thankfully this never felt like an uphill battle due to collaborating with some of the greatest indie filmmakers in the industry.”

Says Knowlton about his role in that process, “The entire process was highly collaborative and included working directly with the individual filmmakers, ITVS, and Murmur. Karim Ahmad at ITVS developed the concept for the series and the filmmakers had already completed the first drafts of their scripts. We all participated in an intensive two-day Storylab where we all, as a group, developed with the broad strokes of what the story world was, and how each film would fit within it. Then Murmur developed a story about Dr. Malik to help extend that world and bring in more of the personal motivation for this character.”

Adds Mabry, “We approached this season just as if we were in a TV writing room. Thankfully by doing programs such as the Fox Writers Intensive, I felt prepared for the challenge of making sure our individual stories fit within this world we as writers and our ITVS support system created, shaped, and molded. Having each film serve as an episode, so to speak, was challenging in making sure we stayed true to each writer’s core story and its characters. While it’s always a little back and forth when writing collectively, the beauty of having a singular mission and passion for every script wipes out the ephemeral angst and stress of writing a series.”

Here are descriptions of the seven films in this year’s series:

Ant – Written and Directed by Tina Mabry. When a bipolar patient abruptly stops taking his digitally encoded psych meds, a therapist named Ant must risk his life to avert catastrophe.

As You Were – Written and Directed by Trevin Matcek. In the near future, an injured soldier returns home with advanced prosthetics to replace an arm and leg lost in combat and must reconnect with family.

Code Academy – Written and Directed by Nisha Ganatra. The Equal Futures Academy addresses gender disparity by keeping boys and girls separate until 18. But at what price to these teenagers’ identities?

Excarcerated – Written and Directed by Aldo Velasco. A young man convicted of a violent crime is released into a surveillance-assisted, community service-based alternative to incarceration.

Happy Fun Room – Written and Directed by Greg Pak. The host of a once-popular kid’s show clashes with child co-stars and crew. The world’s changed and the show’s messages may no longer apply. Can she adapt?

A Robot Walks Into A Bar – Written and Directed by Alex Rivera. A new breed of labor robot works at a bar, his mission is to excel at his new job while avoiding human injury, he soon learns that this may be impossible.

Teacher in a Box – Written and Directed by Tanuj Chopra. A jaded teacher being replaced by a digital avatar protects a girl who invented a product that will make millions for the corporation owning the school.

As FUTURESTATES concludes with its final season, ITVS will be launching Storylab, a one-of-a-kind cross-media web series incubator for independent content creators to develop similar series concepts along a myriad of different themes and genres. The ITVS Storylab promises to yield a portfolio of innovative content in the months to come. Learn more.