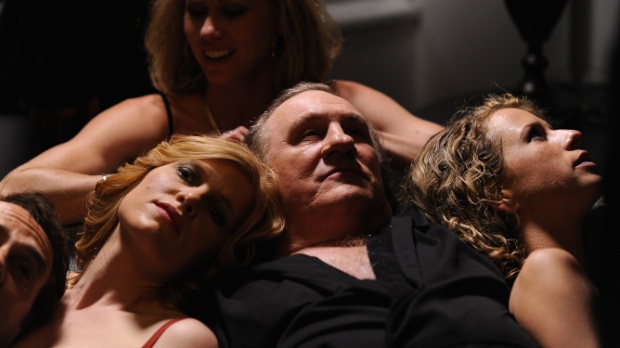 Abel Ferrara’s Welcome to New York is set to screen in the Cannes market on the 17th — the same day it will be released on VOD in France. No word yet on the date of the U.S. IFC release, but our appetite is whetted by a new, very NSFW trailer found on Italian television that beats the rather prosaic one that dropped online a few days ago. Watch it below.

The trade reviews are out too, which suggest the film revisits the intensity of Ferrara’s classic Bad Lieutenant even as it also explores the actor/role psychodrama of Dangerous Game. Here’s Jordan Mintzer at the Hollywood Reporter:

Revisiting L’affaire Strauss-Kahn three years later, and doing it with the wanton decadence of two guys who know their subject awfully well, director Abel Ferrara and star Gerard Depardieu offer up a racy and at times, uproarious portrayal of the incident that initially toes the line between performance piece and soft-core porn, before transforming into an auto-biopic where actor and character meld into the same massive body. It’s a rather fascinating bit of artistic self-indulgence that’s both made by, and about, self-indulgent men, although one that can certainly grow taxing, especially in its latter stages dealing with the domestic fallout resulting from DSK’s many misdeeds.

And from Scott Foundas at Variety:

Scene by scene, Ferrara depicts Devereaux’s airport arrest, police interrogation and incarceration, even using some of the real law-enforcement officials from the DSK case to reprise their roles onscreen. For the later scenes in which Devereaux is remanded to house arrest, Ferrara shot in the actual Franklin Street townhouse where DSK served out his time in the company of his then-wife, the French-American journalist and socialite Anne Sinclair (here called Simone and played by Jacqueline Bisset). And at the center of it all is Depardieu, who gives the sort of performance that calls to mind Jean-Luc Godard’s famous observation that every fiction film is also a documentary of its actors.