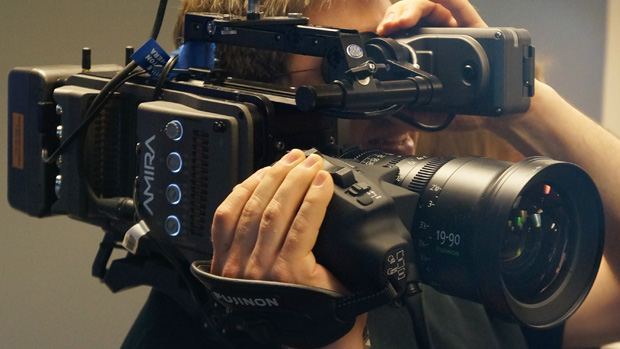 by Michael Murie
in Cinematography, Production
on May 14, 2014

ARRI has met with some success in digital filmmaking with their ALEXA camera. As just one indication of their dominance, the ALEXA was used on three-quarters of this year’s Best Picture nominees. It’s been praised for its image quality, ease of use and ruggedness. But it’s not cheap, and it’s not light.

ARRI last year announced the AMIRA, and described it as a documentary camera. It’s smaller and lighter than the ALEXA, but if you were hoping for a significantly cheaper camera, you’ll be disappointed; the base AMIRA is $39,999. For those on a budget, renting the camera remains the way to go.

The AMIRA is available in three different “packages.” The hardware is the same, but each package adds different compression software options. Significantly, the base model lacks Log C support, while the Premium package adds ProRes 4444 and 2K recording.

ARRI expects to ship the AMIRA shortly, and at a recent event at Rule Boston Camera, we talked to ARRI technical sales rep Guenter Noesner about the AMIRA.

Filmmaker: What’s the difference between the AMIRA and the ALEXA?

The LUT capability is different. On the ALEXA it’s only 1D based looks, on the AMIRA it’s 3D based looks.

On the ALEXA you can only adjust ASC CDL levels, making RGB, Chroma and brightness adjustments. In 3D based LUTS you can change the Rec 709 signal itself; adjust the knee — black levels — hue adjustments, RGB adjustments, which gives you more control from the coloring side (and you can) have a preview look in your camera while you’re shooting.

Filmmaker: What are the differences between the three different models of the AMIRA?

Noesner: The physical hardware is exactly the same on all three models. There’s the Base, Advanced, and the Premium package. The Base package lets you only record Rec 709 with a maximum of 100 fps. The Advanced model lets you shoot 200 fps and adds the ProRes 422 HQ codec, and the premium model adds 2K recording, ProRes 4444 recording and unlimited 3D based looks.

Filmmaker: Is the operation of the AMIRA the same as the ALEXA?

Noesner: The operation is the same. 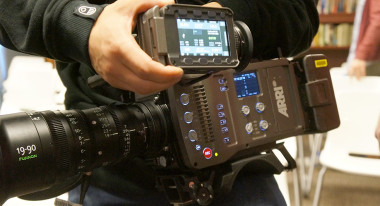 ARRI AMIRA and viewfinder. With that particular lens attached it was surprisingly heavy.

Filmmaker: What’s the difference in weight between the AMIRA and the ALEXA?

Noesner: The body itself is probably nine and a half pounds, which is lighter than the ALEXA. The ALEXA is roughly 18 pounds with the viewfinder and handle, so it’s not quite half.

Filmmaker: What does the Base package include? Does it include the viewfinder? What about the lens mount?

Noesner: The basic camera package includes the viewfinder, cable and the top handle. You add a shoulder pad and battery plate.

The lens mount is extra; you have to specify which one you want and you need a mount to use it. There are three mounts. A PL-LDS mount – which has contacts – is roughly $1,750. The same for the EF mount. The B4 mount has optical elements; it’s roughly $6,500.

Filmmaker: Are those options going to be available when it ships?

Noesner: All the options will be available. You have to add a mount, you have to add a battery plate for whichever batteries you prefer, and then there’s different accessory bundles that you can select based on what you want. If you want it stripped down to just the bare bones you can have it like that, or you can customize it. If you know you’re using Steadicam you will need the Steadicam plate.

Filmmaker: What about ND filters?

Noesner: The AMIRA has three built in NDs, which are two sliding trays of filters. One clear, .6, 1.2 and a 2.1. And they are full spectrum NDS.

On the ALEXA XT we introduced behind-the-lens filtering, but those have to be manually removed and put in. It’s not automatic, run and gun. 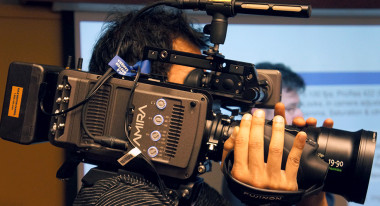 Filmmaker: Does AMIRA record to the same media as the ALEXA?

Noesner: The media is also a big difference. The media on the ALEXA is SxS cards or Codex drives for RAW recording. On the AMIRA it’s CFast. CFast is a new Compact Flash-type card that has a pin-less design, so you don’t have any bent pins by repeatedly removing and pushing a card back in. It’s a non-proprietary design, so we don’t make it; all the memory makers are going to compete and hopefully the price comes down. Currently it’s about $1,200 for a 128GB card.

Noesner: Yes. We should start shipping in May. I don’t know how many.

Filmmaker: What about DNx support?

Noesner: Right now we are only offering ProRes codecs and we will have to see if there’s demand for DNx. We always have to look at the benefits of how much R&D has to be put in to make it worthwhile for us.

We’re also thinking about maybe coming out with some sort of a download option. It could be as simple as a little box where you download your footage that can convert this footage into DNx or H.264 without having to natively put it into the camera. That might be a cheaper, simpler solution if somebody prefers a specific codec and you can do it on the fly as you download and transcode to your specified codec.

Filmmaker: The AMIRA is billed as a documentary camera. What does that mean to ARRI?

Noesner: It’s a grab-and-go camera that you don’t have to build out to work with. You’re ready to shoot, and it’s instantly able to switch speeds between high frame rates and low frame rates with a switch of a button without having to reboot into high-speed mode.

In the AMIRA, that limitation is no longer there.

Filmmaker: Is it the same sensor as the ALEXA?