“He Could Almost Do It All Alone”: Producer Paula Vaccaro on Working with Emir Kusturica 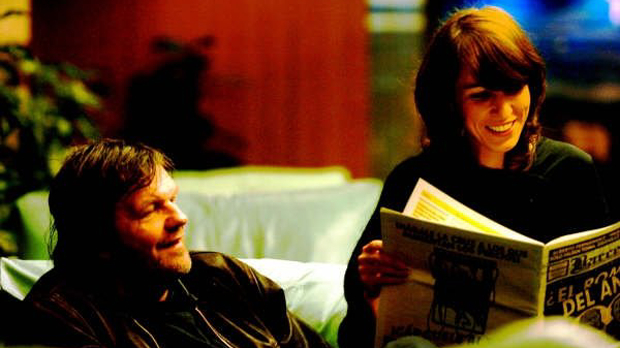 I guess people expect to see a big bearded man as Emir Kusturica’s producer. Of course the question I get the most is, how did it start? I was a journalist more than 20 years ago in my hometown, Buenos Aires. In the late 1990s I moved into production: management, line producing, etc. In the early 2000s I moved to the UK and Spain and started to produce for others. My encounter with Emir’s work was thanks to Jose Ibañez, Pentagrama Films producer, who was producing Oliver Stone’s The Immortals, a series on world leaders seen from Oliver’s prism. I was Development Producer for one of the films, Gadaffi, which went from Oliver to Nanette Burstein and in the end did not happen. I guess it could have been my flair for difficult things that led Jose Ibañez to call me with the idea to put together Maradona by Kusturica at the end of 2004. When we started there was no Maradona (or Kusturica, almost, for that matter). It was José’s and I task to persuade them both to come on board.

Many times people say finding money is what’s problematic on independent films. In this case when we had the money to make the film, the problems just started. It took four years to finish and in the meantime we traveled and shot all around the world. It was a difficult project but one full of joy as well. Emir and Maradona liked each other a lot, there was happiness when they met: they played, laughed and that was contagious. In 2008, we were in Cannes and I still remember when Diego, before entering the red carpet, touched a cross in his chest and turned around to say to me “There are more photographers here than in Mexico in 1986.” He entered the red carpet like he did on football grounds.

In 2007, while we were still in the making of Maradona and I was already based in London, Emir called me to help with film selection for the launch of his Küstendorf Film Festival. So it was now another type of job but still collaborating with him and his family. I was scouting films from all over the world and sending them to his daughter Dunja, who was overseeing the selection (and still does). I helped for a couple of years. The festival was Emir’s personal idea growing, and it grew amazingly well. They are a bigger team now but it still feels like the same small family group. It is by invitation only, there is no market, no industry pressure, just the energy of filmmakers meeting each other. You share tables, you eat delicious food, you are welcomed into a family that lives and breathes cinema. You could have breakfast with Jim Jarmusch, dinner with Thierry Frémaux and dance until 2 am listening to an amazing band from the Balkans which otherwise you would never know, because as we all know culture is monopolistically treated by the English-speaking world. Küstendorf is a utopia, the dream of a visionary like Emir. You are in the Serbian mountains, it is extremely cold, but you are treated to cinema, food, music, dance, and a cast of characters you will never forget. You leave that place and you believe in cinema, you remember the art, the collective feeling.

I always think it is sheer coincidence that I found myself working with Emir but I could not do it without Maja and Dunja, Emir’s wife and daughter. Emir can do what he wants and he does. He builds cities, makes films, tours with a gigantic band, writes a novel, a memoir. He could almost do it all alone. But cinema can’t be done alone and I guess I am sometimes in the right place at the right time with him and the family. I love them very much and I know they will be in my life forever. I am proud and humbled by the chance to defend Emir’s vision and help him create what he wants to create. Sometimes in more commercial cinema you get 20 marketing people banging at someone’s film “to make it better”; with Emir that will never happen and I feel a bit like a guardian of what he wants to do. I grew as a producer working with Emir. I grew in resilience for sure and in understanding the film industry. He has taught me many of the things I know about the film industry and about cinema. He is not only a director and a writer: he is an architect, a producer, a business person. I guess he is a bit of a patriarch and I accepted the archetype and nurtured myself from it. I can’t compare him to anyone. He is the most intense person I have ever met. It is never easy but amazingly worth it.

Right now is his return to fiction filmmaking after eight years, and it is a sum of things. The current film, On The Milky Road, started creatively from a short I produced for an upcoming long feature called Words with Gods. It was natural that I tried to help him produce the long feature of it. In On the Milky Road Emir plays a monk and it is the same in the short. Emir believes in God and is a practicing Serbian Orthodox. When he built Küstendorf (the traditional village he built for his film Life Is a Miracle) one of the first things he built was the church. When he visited Buenos Aires early in the shooting of the Maradona film, he asked to visit the Serbian church of the city. I think he finds comfort in his link to the church and the Serbian religion.

When he told me he had felt inspired to transform the short into a long feature, of course it was mandatory to put the project together. It started with the search for finance and the right way to do it. He wanted to have freedom, he wanted to work with Monica Bellucci, and he had a 30-page script. My only goal was to make it happen as he wanted. I started in the traditional way, looking to TV channels to finance it, and it did not look like an easy ride. The BFI in the UK turned it down because “it was not a British film” regardless of me being a producer in the UK, the film industry was not in his best moment (just out of the 2010-2011 crisis).

Finally, after many months of conversations and negotiations, it started to look clear we could make it happen in the right way: I was really blessed to have Lucas Akoskin, a good friend and the producer of Words with Gods, to pave the way to working with Alex Garcia. Alex not only became my co-producer but was also the main financier of the film. A person made to work with Emir for his way of looking at projects. He is one of the most inspirational people I have ever met in the industry on the business side. Alex understood and respected Emir’s freedom and needs from the start. Then of course there is Monica Bellucci, who said yes to a small film, with many months (!!) of shooting, in the Serbian language. I have a lot of respect for her and I think she is an amazing star who loves to push her boundaries as an actress and adores working with real auteurs. She really understands the director’s view and has put herself to the service of this film. I am really grateful to her too.

When you work with Kusturica you enter a world of his own. We plan, and plan again. You can plan as far ahead as you like and maybe two days before the start, the plan will change. You just breath and maneuver, there is no point in fighting really. Sometimes we talk about imaginary projects and sometimes there are projects he has in development with other producers that I get to see. Right now finishing the shoot of On the Milky Road is my only priority, then the priority will be to see the post finished, and then the release and then the outreach and engagement with his audience. I know people are going to love this film and it is my job to make sure it reaches far and wide. One step at the time. I look forward to finish shooting by the end of the summer, and be in post throughout winter with Mica, Emir’s loyal and super talented editor. Another family member, another person I have enormous respect for. Only he was able to handle the 400 odd hours we had during Maradona, or the subtleties of the short film with sound and image, or Black Cat, White Cat for that matter. I truly look forward to have the film finished in March-April next year.