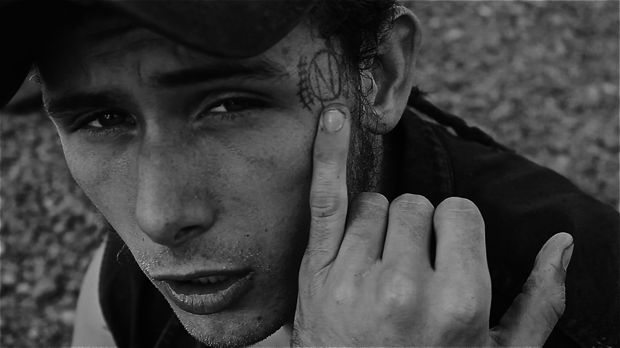 by Michael Murie
in Directors, Interviews
on May 22, 2014

For 18 months Daniel Skaggs rode freight trains with a DSLR, a consumer video camera and some GoPros, documenting the lives of train riders. The resulting film, Freeload, was co-produced and co-edited by Mather McKallor and Ryan Seitz. This was the first full-length feature film project for all three. We interviewed Skaggs and Seitz at the recent Independent Film Festival Boston, where Freeload was an official selection.

Filmmaker: What is Freeload about?

Seitz: It’s a documentary about modern day train riders. Daniel road trains for 18 months and really got acquainted with the guys who ultimately became the characters of the film. It’s not a film about riding trains or how to go ride trains. It’s a portrait film of these five guys, who they are and why they decided to live their life this way, and the personal and social struggles that accompany that.

Filmmaker: How did you two meet?

Skaggs: We met in 2010 in a little co-op grocery store in Missoula, Montana. I had this idea about making a movie and I found out that Ryan and his friend were about to graduate from film school. I hit him with this idea about making a movie about kids that ride freight trains. It took a month or so of talking to figure out if it was feasible. We decided that it was, and they thought that it would be a great first project out of school. We started raising money and pre-production and I hopped a freight train out of Missoula in June of 2011.

Filmmaker: What was the discussion?

Seitz: I think at first it was, am I prepared to make a feature length film? What are the logistics behind this? How can someone ride trains for an indefinite period of time and manage cameras and audio equipment and the transfer of footage and things like that?

Filmmaker: What was the solution to those challenges?

Skaggs: It took a couple of rounds to figure it out. At first, Ryan and Mather followed in a car and we would meet up in random cities and towns. That lasted for about two and a half months, and we decided that financially it just wasn’t a viable option. So then we started mailing memory cards and hard drives back and forth. We communicated through phone calls and email to figure out how the story was going to develop.

Filmmaker: Daniel, you shot all of it?

Skaggs: Yeah, 90-plus percent of the movie. I followed five — well more than five — but the five main subjects of the film, off and on for 18 months.

Filmmaker: What were you shooting with?

Skaggs: Consumer cameras, a Canon T2i and a Canon Vixia, and two GoPros. The Gopros captured a lot of the action shots.

Filmmaker: What were you doing for audio?

Skaggs: I had a little Olympus LS-10 field recorder and a lav mic to hook people up with, though sometimes we’d have to use in-camera audio. 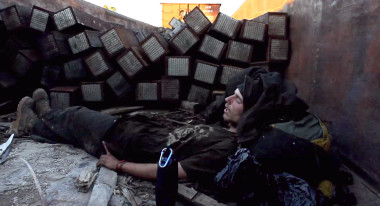 Filmmaker: You ended up following five riders. How did the movie itself take shape up?

Skaggs: I met our first subject pretty soon after I left Missoula, and I followed him for a while, and then he decided he had to leave. These guys live a very unpredictable life. He woke up one day and decided he had to go across the country. So we’re back to step one. We had to find someone else or a group of people to follow around. I just continued to meet the different subjects of the film over the course of about a year. Then it was just meeting back up and following them and seeing what they were up to.

Filmmaker: How much footage did you end up with?

Seitz: We have never really quantified it in hours. I can tell you that there’s over six terabytes, probably closer to seven terabytes of footage.

Filmmaker: When did you decide that you had your story?

Seitz: Mather and I were in Seattle at the time. When we first started getting footage we weren’t editing actively, but there was a lot of discussion about where it was going. We got to know the characters, and you can start to see a plot line develop. Ultimately, we had gotten a pretty solid idea of what the story was going to be and we had things plugging along pretty well.

Funds were running out, winter was approaching, and there was a sugar beet harvest in North Dakota which was an event which several of the characters were planning on going to. I think we realized this was probably going to be a good time to wrap things up and I think it worked out very well.

Filmmaker: That was October of what year?

Filmmaker: And you spent how long editing?

Seitz: We finished the cut that is screening here in October of 2013.

Filmmaker: Any advice to new filmmakers?

Skaggs: My biggest piece of advice is to budget your funds so that you spend your money correctly.

Seitz: I think the hardest step in filmmaking is making the initial commitment to doing it. So if you have an idea and find a story that you think is worth telling, go for it and stick to it.