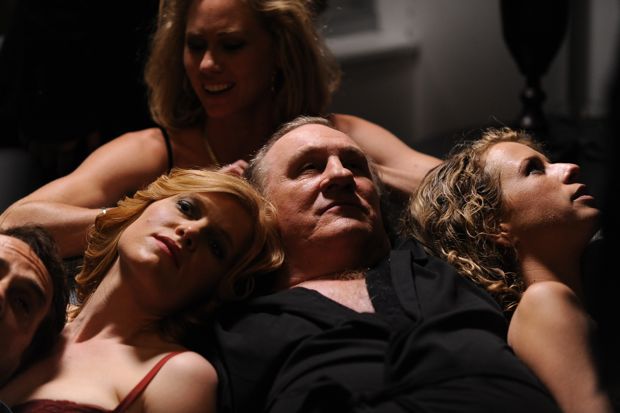 by Ariston Anderson
in Directors, Festivals & Events, Interviews
on May 21, 2014

It’s been the most talked about film of Cannes this year, one of the most well-reviewed yet, and it’s not even part of the competition line-up. That’s just Abel Ferrara’s style: he’s still one of the few directors who consistently manages to make films his own way, outside the typical studio system.

His latest is a masterstroke of filmmaking. It’s a story that puts the fun back into cinema, a film that breathes wit, heart and imagination. The New York native returns to the Croisette with Welcome to New York, a damning film inspired by the Dominique Strauss-Kahn scandal.

The film had audiences laughing to the point of tears at a special Cannes screening which coincided with the film’s digital release in France. Gérard Depardieu is flawless in the role of Devereaux, an obese sex maniac on the verge of taking over the world. Audiences completely fell for his depiction of a man who couldn’t overcome his own addiction, which in the end ruined Devereaux and everyone close to him.

IFC has picked up stateside rights to the film. We had a chat with Ferrara on the sandy beaches of Cannes about how little he depends on the script while shooting, working with non-actors, and why it always pays to fly first class.

Filmmaker: How important is the script to you while shooting?

Ferrara: Those lines were written on a snowy day a year and a half before we ever get to where we’re going. I don’t want to hear those fucking lines. That’s a blueprint. That’s a fucking guide. That’s like a fucking reminder of what we’re trying to get to. Whatever the actors gotta say, they gotta make it real.

Ferrara: A lot of it came from outside of the system. If it weren’t for some angels coming in and rescuing the film, who knows what would have happened. This is what the film business is about. You hear stories of guys going to get normal financing and they strike out, and on the way home, without a penny in their pocket, they accidentally sit next to somebody on the airplane who’s going to finance their next 30 films. So, it pays to fly first class, no matter how little money you got, because you ain’t going to meet anybody financing your films in coach.

Filmmaker: We’ve seen a lot of characters who are destroyed by their own addictions in your films. Is there an Abel Ferrara redemption movie in the pipeline?

Ferrara: I’d like to make a film where a guy actually says, “Hey man, I got a problem.” Other than “I don’t feel anything.”

My favorite line of the movie is when [Jacqueline] Bisset [as Devereaux’s wife] says “This is a disaster.” You’re going to be president of France, and now you’re in jail. Do you realize this is a disaster? He doesn’t feel anything. He doesn’t care. I think Gérard found that in him. He doesn’t really care. Too bad. He’s a sociopath. I don’t know why people really get off on that, but they do.

Filmmaker: The prison scenes featured incredibly strong performances from the cops and prisoners alike. How did you get this kind of acting out of non-professionals?

Ferrara: They’re real people, man. We went there and there they were. We cast a lot. We try to find people who aren’t actors. We use actors. We mix ’em up.

The funny thing is they’re real cops. Those guys are the real McCoy, the real deal. And you cannot get that out of an actor. If you’re brilliant, if you pay $5 million to an actor — Willem Dafoe, one of these guys — they’ll come and get it for you. But otherwise, it’s the real deal.

Ferrara: When things get boring, slow down. It’s a joke in the editing room. If the shit ain’t working, it’s a drag, don’t try to cut it fast. The whole instant impulse of every human being is you think you don’t need anything. Dude, you need it. The thing about a shot is the performance is going to tell you to cut.

The actor is spinning his web; he’s creating that magic. You’re not going to make a cut. When you gotta cut, there it is, man. The first cut of this film was four hours long, man. The edit is when the magic isn’t there. And with Depardieu, he’s a gifted, gifted actor whose acting decides when the scene is cut. I mean what can you say? He’s not the only one, but he’s one of them.