“I Was Too Young For Punk”: Lukas Moodysson on We Are the Best! 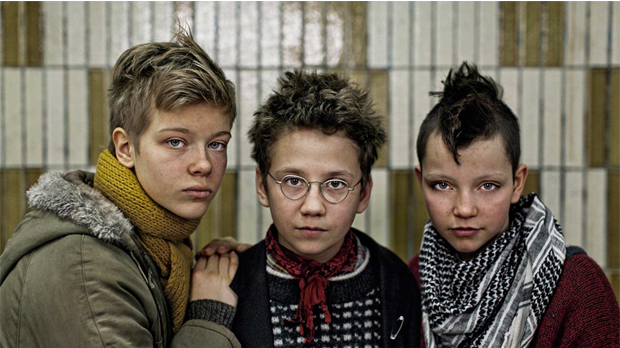 by Steven Erickson
in Directors, Interviews
on May 28, 2014

Back in 1998, Swedish director Lukas Moodysson’s debut Show Me Love (original title: Fucking Åmål) offered up a tender story of teenage lesbian love. His follow-up Together, which depicted a troubled commune in the late ‘70s, continued in much the same vein, but starting with his third film, Lilya 4-Ever, his work grew darker and more experimental. The change in tone really didn’t suit him.

Fortunately, his latest film, We Are the Best!, is a return to form. It follows three 13-year-old girls in 1982 Stockholm as they form a punk band and try to master one song (a protest tune against sports) despite the fact that only one member knows how to play her instrument. It’s Moodysson’s lightest film in tone; while not much seems to be at stake here, its portrait of female friendship is refreshing and its sense of humor warm and contagious.

Filmmaker: As depicted in We Are the Best!, Swedish punk seems like a deeply middle-class phenomenon. Was this the case in real life?

Moodysson: Both yes and no. I think there were different kinds of punk. I don’t know very much about American punk, but in Sweden, some of the best bands came from the suburbs. There were a lot of divisions between the punk that was more about partying and destroying things and the punk that was more political. So I myself was just like the characters in the film. I was too young for punk. When I started listening to it, it was already dying out a little bit. I don’t know how it was in ‘77 or ‘78 because I wasn’t around.

Filmmaker: Are Sabotage, the male duo that the girls go visit in Solna, based on a real band?

Moodysson: Yes. In real life, those band members act in the film as the two men who work at the youth center, so they’re not professional actors. I just thought it would be fun to see if they could try and act. I think they’re really funny. In real life, they wrote the song [that goes] “Reagan and Brezhnev/Fuck off.” They taught this song to the kids playing themselves. So they really had these young actors portraying themselves. That was really strange.

Filmmaker: Do all the actors play their own instruments?

Moodysson: The guitar player in Sabotage struggled sometimes, finding the right chords and singing. He got a bit of help. But more or less, yes.

Filmmaker: Even the guys in Iron Fist [an all-male heavy metal band who share practice space at the youth center]?

Moodysson: They are a real heavy metal band. They’re called something similar, like Death Row. But in real life, they don’t play ‘80s heavy metal. I gave them some Iron Maiden records from ’81 and ’82 and asked them to write something in a similar style. Iron Fist is the name of a Motörhead album, although I didn’t think about that when I named them.

Filmmaker: How closely did you adapt your wife Coco’s graphic novel?

Moodysson: In atmosphere and tone, quite close. In details, there are a lot of differences. There are scenes that I didn’t keep and new scenes that I wrote and characters that I changed. When I look at the film and when my wife looks at the film, she feels that it’s very close to her work. It’s the first and last time I’ve adapted any of her work. It was a simple process, really. There were never any fights or anything like that. But it’s also the first time I’ve adapted anyone’s work. I’ve always written my own scripts. It felt really nice because I have a fear of white paper and starting from nothing. I do a lot of research and feel like a journalist, just to have something to start with. It was a very nice experience to start with a book, not air.

Filmmaker: Were the actresses familiar with the punk scene?

Moodysson: Not very much. I think one of them said she had a friend whose grandfather played in one of those bands. It’s a big generation gap. It’s 20 years before she was born. That’s a long time. In their minds, I don’t think there was a big difference between the ’80s and the ’60s or ’50s. It was just way back. At the same time, I never felt that they had to be experts on the ’80s or punk. I wanted them to play the characters as simply as possible and close to themselves. There was just some slang they couldn’t say. We often had to police them. There was one thing we didn’t do. It’s that young people in the ‘80s talked much slower than young people today. I don’t know if this is true in the US, but I talked to someone in France and they said it was the same thing there. If you look at a documentary from ’70s or ’80s Sweden, young people’s ideal is to be cool and laid-back. Now the tempo is much higher.

Filmmaker: Several of your films have been about teenage girls. What attracts you to them as characters?

Moodysson: I’m happily married and heterosexual, but I’ve always found it easier to identify with women. It was always easier for me to identify with my grandmother than my grandfather. There’s something inside me that feels like an old lady. That’s one of the problems I had with punk. When I was 12 or 13, listening to punk, it was very important for me, but I felt like it was too masculine and aggressive. I really think that’s the reason. I find it very difficult to relate to a group of men.

Filmmaker: Was there a Swedish equivalent to female U.S. and U.K. punk singers?

Moodysson: There were female Swedish bands that were close to punk but they were still more rock, softer. There were no really good punk bands in Sweden that were all female.

Filmmaker: Starting with Lilya 4-Ever, your work suddenly turned a lot darker. What inspired this change of tone?

Moodysson: I guess you can say it’s a change of tone, but for me, I started writing poetry, then I began making films. For me, it’s chaos. There’s no simple explanation. I wake up everyday and walk down the street. Depending what you see, there’s a time for sad things and happy things. If I see someone sleeping on the street, it almost kills me, but at the same time, there’s something fantastic going on. I envy artists who are capable of keeping one track going on. I feel like I’m circling, going back, trying this and that, never really succeeding and trying to understand things.

Filmmaker: Have you thought about making a follow-up film to We Are the Best!, showing the girls a couple of years down the road?

Moodysson: I would love to do a film showing what they’re like today, because that’s my generation. We’re exactly the same age. I’m really interested in what happened to my generation, what we turned into and how we developed from the point where we listened to music, went to school and tried to be small, childish rebels to what we are today. It would be a difficult film to make, but I’m thinking about it a lot.

Filmmaker: Was the film successful at reaching a teenage audience in Sweden?

Moodysson: Pretty successful, but I think the distributor wanted a bigger audience. It’s a tricky film to find an audience for. It’s a film for children but also for people who are nostalgic. It’s not aimed at one group. From my perspective, it feels odd to get an audience that’s enormous. It feels difficult to relate to so many people. Some of my early films got an enormous, extremely big audience. I couldn’t relate to that. It was too difficult. I can talk to a roomful of people, but talking to thousands of people is hard. Talking to hundreds of thousands is even worse. I always imagine one person seeing my film. Someone somewhere is watching this film, and it means something to him or her. I can’t relate to hundreds of thousands watching it.

Filmmaker: To me, your films feel different from any other Swedish films I’ve seen. Do you feel part of any Swedish cinema tradition?

Moodysson: First of all, it feels like I’m part of a tradition which is often not shown outside of Sweden: films for or about young people. Some of them are made for television. I grew up with some of them, which were made in the ’80s. That’s the tradition I grew up with. I also feel quite good friends with Ingmar Bergman, even though he’s dead. We’re better friends than when he was alive.

Filmmaker: I could see Monika, from Summer with Monika, appearing in one of your films.

Moodysson: I would’ve directed her a little bit better. I think he had a bit of a problem understanding acting. Now he’ll get angry at me. He did too much theater directing, so he didn’t get movie acting.

Filmmaker: As a Swedish director, is he an albatross hanging over Swedish cinema, even today?

Moodysson: No. When he was alive, maybe. I never met him. He talked about me in some interviews, which was very nice. I know some people who met him. He was a very complicated person and not always nice to people. He got a lot of enemies on a personal level. He didn’t treat his children very well. He was a controversial person in Sweden and very much disliked. I think it was more difficult for the generation before me, those who were 20-30 years younger than him. They had him as a father figure. For me, he’s a grandfather figure, and that’s a more relaxed figure. For the generation before me, he’s a dark cloud. Also, he was just better than they were, and it’s hard to compete with that. In many ways, he was a fantastic director. He had his faults like everyone.

Filmmaker: In America, I think there was a period where people rejected his work as part of a middlebrow arthouse canon, but at the same time…I don’t know if you’re familiar with the Criterion Collection, but when they started their Eclipse line of smaller box sets, the very first one they did was “early Bergman.” I’ve been told that he still sells very well in the US on DVD.

Moodysson: He’s a special one, but he’s also proof that despite the fact that everyone talks about cinema dying, moving images — if we include TV series and YouTube clips — are still a very young art form. He was a pioneer in a way, but it’s very difficult to make films. We’re going to get even better in the future. We’ve only been making films 100 years.

We Are The Best! opens in limited release on May 30.