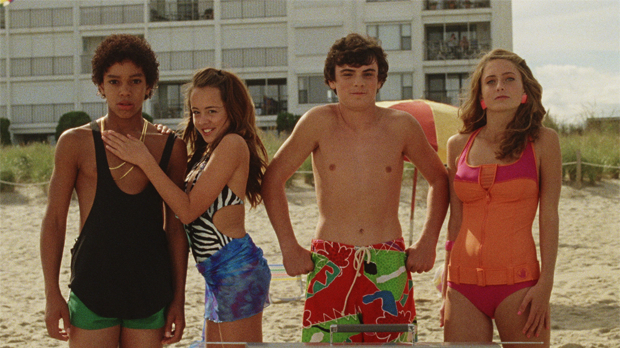 by Vadim Rizov
in Directors, Interviews
on Jun 6, 2014

Summer, 1985: Casey Kasem is on the radio and mastering the moonwalk is a must. Radford “Rad” Miracle (Marcello Conte) has to go on family vacation with his patient mom (Lea Thompson), sneeringly cool goth sister Michelle (Helena May Seabrook), and cheapskate cop dad (John Hannah), who insists on driving to Ocean City, Maryland in his police car to save money. All Rad wants to do is play ping pong, get cooler, and get the girl, but the local rich kid bullies are an impediment. Can Rad up his ping pong craft enough to beat them? And what’s up with that Boo Radley-esque lady next door (Susan Sarandon)?

Following up on his slept-on sibling drama Septien and shooting once again on 16mm, Michael Tully’s ’80s throwback is a very odd movie, at once painstakingly hellbent on capturing the period details of its setting and the general feel of a dozen Karate Kid knockoffs while keenly aware it can never actually pass for what it’s imitating. In that slippery liminal space, Ping Pong’s intentions can sometimes be impossible to determine. Sometimes it’s unclear what’s pastiche, what’s a send-up, and what’s from the heart, but the film rides its pre-determined coming-of-age arc to a gratifyingly sincere finale.

Tully’s a longtime friendly acquaintance for whom Ping Pong represents the culmination of a generation’s worth of dreaming. On the eve of its release, I spoke to Tully about 20 years’ worth of wanting to make the film, licensing Rad’s Air Jordans and filming at his childhood buffet.

Filmmaker: How do you explain the movie to be people who have trouble understanding it?

Tully: It’s kind of anti-drama. Where you’re supposed to be building the stakes for the final match, it’s not life or death like 8 Mile. It ended up being a love letter to my upbringing, like what if I inserted my own normal, middle class, functional family into an ’80s movie with my interests at that age, what would happen? John Hannah wears my dad’s police uniform in the opening scene. That is my dad’s real Maryland State Police uniform from before he retired. So there’s a lot of — not autobiographical, but personal things. My dad was a cop, we took a police car on vacation because he was a bit of a cheapskate.

It’s an experiment, but I don’t know what happened. I don’t want to make something where I’m on set and I’m like “This is totally clicking.” I want to be like, “This is kind of weird and interesting and isn’t going to have the same tone as something I watched 39 times at a film festival.” More than anything, I think it was trying to be told from the perspective of an innocent 13-year-old person, so there’s no irony. We didn’t want any hindsight humor. Of course there was going to be spillover. Certain jokes, they feel too obvious. I don’t even know how those decisions were made, it was a gut thing: that feels like too much, too over-the-top, too Hot Tub Time Machine. It’s a weird one, it’s got a strange sense of humor that some people won’t think is funny.

Tully: He’s the most obvious “character.” That was inspired by No Retreat, No Surrender. The movie that was inspiring this wasn’t The Karate Kid, it was the knock-offs of The Karate Kid. Miles and Marcello, they’d never acted before, so I didn’t show them those ‘80s movies, because they could have been like “this acting is terrible,” and I think it would have thrown them off.

Filmmaker: So take me through the timeline of making this film.

Tully: I was a senior in high school in 1992 when I started writing it. At that point, it was really fictional. Rad was a loner and he went to live with his aunt and uncle for the summer. It wasn’t inserting my personal life into the movie. Every year I would rewrite it and it would be a reflection of the movies I was into at the time, so Sasquatch was in it drinking a 40 in one version. I don’t know what was going on with that one.

So in 1992 I had the idea, but it was always Ocean City, the title, the character Rad — it wasn’t Rad Miracle then, it was Rad Smith or something — and then I went to college, graduated from the Univeristy of Maryland at Baltimore in 1997, with the intention of making it. With my senior film, I did a teaser trailer that said “Coming soon, Ping Pong Summer.”

That was 1997, and then in 1998 I moved to New York and met David [Gordon] Green that summer. He said, “I’m shooting a movie next summer called George Washington.” I was like, “I’m shooting a movie next summer called Ping Pong Summer.” And next summer I was in Winston-Salem working on George Washington, and Ping Pong Summer is now at Rooftop Films in 2014. So it’s been a long time, and it wasn’t until 2011, when I sold Septien, and George Rush, who sold that, asked me, “So, do you have any other movies?” We were having a drink at The Yaarrow to celebrate, and I said, “This ping pong thing I’ve been trying to make for 20 years.” And he was like, “Wait, that’s your dream project, is a ping pong comedy in the ‘80s with hip-hop in a beach town? That sounds like a good business idea, not one of these sincere indie dramas that’s made for the bedroom.” So he right then and there said “I want to produce it, I want to raise the money,” and that was the true start.

Filmmaker: There’s an epic tracking shot of a buffet that goes on forever.

Tully: That was our Béla Tarr reference. We did La Jetée with our freeze frames, we were trying to get some good movie references in. That buffet is the one I went to growing up. The only difference — I texted Harmony Korine the day before: “We’re shooting a minute-long dolly of a buffet, a 30-foot-long dolly.” He was like, “Oh, you’ve got to put Jello in there, that makes it legit.” That buffet has three long trays, so we pulled out the clams or whatever was at the very end and put Jello in there. That was the only difference, the only manipulation we made to that. I was eating clam strips behind the camera as we were doing the dolly. It was the first shot of the movie.

Filmmaker: Licensing all the video games for the arcade seems like a nightmare.

Tully: That’s the trip of being a low-budget filmmaker. You make a movie but you can’t get the clearance, you can’t have the Nike sneakers even though the character would be wearing them. It’s not product placement at that point, it’s the credibility of the world, and miraculously — having a producer who’s an entertainment lawyer is a good idea, I would tell people, “Do that.” When I found out that we actually got clearance from Nike to use that pop top, it wasn’t just because Nike’s cool, it was the Nike pop top, it was a big deal. If we didn’t do that and had this fake Nike company, people watching would be like, “This isn’t a real movie.” The credibility to have your movie taken seriously on a low budget is a nightmare, and it starts with the music and the product placement.