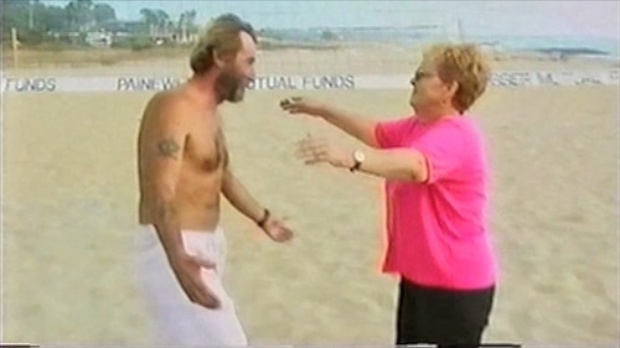 Dongo and Gayle in Giuseppe Andrew's In Our Garden

by Lauren Wissot
in Directors, Festivals & Events, Interviews
on Jun 20, 2014

With the maniacal film geek erudition of Quentin Tarantino and the madcap family values sensibility of John Waters, Giuseppe Andrews has made 30 independent features that you’ve most likely never heard of. And he probably couldn’t care less about that.

A veteran of both Hollywood and indie film, Adam Rifkin, on the other hand, is a name familiar to any fan of the 1999 cult comedy Detroit Rock City, which Rifkin directed, and which starred Andrews alongside Edward Furlong. Now Rifkin and Andrews have teamed up again as Rifkin follows the director in his quest to shoot in two days his latest flick, Garbanzo Gas, about a cow that gets an all-expense-paid trip to a motel (courtesy of the slaughterhouse).

Andrews may have been so enamored by the scene in Buñuel’s Viridiana, in which the beggars install themselves in the protagonist’s house that he wants to make an entire movie of “just that scene, but Rifkin seems equally inspired by Andrews. The result is Giuseppe Makes A Movie, the Hollywood outsider/insider’s sweet tribute to his fellow filmmaker friend. And to the Dreamlander-type family of homeless men and trailer park neighbors that orbits Andrews’s mobile home/movie studio in Ventura, CA.

Filmmaker spoke with Rifkin prior to the doc’s New York premiere at Rooftop Films.

Filmmaker: So you’ve known Giuseppe for a long time – why shoot a doc about him now? And why did he agree to let you?

Rifkin: It’s true I’ve known Giuseppe for about 15 years. We met when we made Detroit Rock City together. He came in and auditioned on the very first day, and I knew immediately that I wanted to cast him in the film. As the movie unfolded and we grew closer he confided in me that he loved film and was obsessed with foreign filmmakers like Fassbinder and Buñuel. He wanted to be a director someday too, and I was obviously very supportive. But little did I know how original of a filmmaker Giuseppe would become. This shy and respectful kid started cranking out no-budget films one after another, and every one of them was unlike anything I had ever seen before. I’m really hard to shock and these were crazy. Insane. But not a forced, “hipster trying to be weird for weird sake,” kind of insane – these were genuine descents into mind-altering madness. I knew he lived in a trailer park with his father, but I never expected his park would become his back lot. And I never anticipated his repertory cast of players would be all the real homeless people, winos and outcasts who lived in and around his trailer park.

Each time he’d come over and show me his latest masterpiece he would tell me the most hilarious stories of what it took to get it made, and the tales of how he’d wrangle his players. The stories were nuts, but he’d tell them with great affection. He had assembled a family of misfits up there in Ventura, all of them society’s outcasts. Ignored every other day of their lives – people averting their eyes or crossing to the other side of the street when they see them coming. But Giuseppe created an environment where they’re welcome. He makes them feel special. He treats them like movie stars. Hell, they are movie stars! I found the whole thing very touching.

Giuseppe is an artist and he takes his work very seriously. He’s notoriously interview-phobic because he wants his work to speak for itself. So when I suggested that I shoot a documentary about his process I thought he would reject the idea out of hand, but I was elated that he agreed. I think he agreed because he trusts me. He knows I’m a genuine fan of his films and that my intentions were not to exploit him, his casts or his process.

Filmmaker: You’ve been directing fiction films for years, but this is your first doc. Personally, I wish every documentarian would make a narrative film first to gain some storytelling chops. Was it a natural – or difficult – transition?

Rifkin: I love telling stories, stories of all kinds. Big stories, intimate stories, funny stories, tragic stories, etc. – that’s why I always wanted to make movies. Narrative filmmaking has obviously been my primary focus thus far, but switching over to a documentary format felt very natural to me – namely because I so connect with Giuseppe. His is a tale I knew from its beginning, and it’s a story I felt compelled to share. The characters are more colorful and fascinating than any characters I could ever dream up, and Giuseppe’s burning drive to create gave the film more of a forward momentum than any ticking clock plot contrivance I could ever concoct. Giuseppe made the process easy for me just by being so damn interesting. A good documentary is no different than a good narrative film. A good story is a good story. Giuseppe and his fractured fairytale of a family are more heartbreaking and hilarious than anything fictional I could have ever imagined.

Filmmaker: This film reminded me of another doc, Don Argott and Demian Fenton’s Last Days Here. Not that Giuseppe is anything like Bobby Liebling, the heroin-addicted, rock-legend protagonist of that film. But the relationship between Bobby and his caretaker/manager Sean Pelletier is very similar to that of Giuseppe and his own producer, Big Ed. At the heart of both films is a sweet love story of sorts, between a wild artist and the man whose entire life is devoted to helping him realize his (their) dreams. Were you always aware there was this deeper angle there?

Rifkin: Without a doubt. Yes, there are a lot of outrageous antics at play here, but at its core Giuseppe Makes A Movie is about a family – a twisted family of lunatics sure, but a family nonetheless. The family Giuseppe was born with – his father, caretaker and biggest fan, Big Ed; his ever understanding and supportive rock of a girlfriend Mary; and the family of outcasts he’s taken in and have made feel whole again. Giuseppe inspires them all and in turn they support him unconditionally. They believe in his need to create. Seeing how happy he makes them, and they make him in return, has always touched me.

Filmmaker: What were some of the challenges of shooting a fellow director? Did Giuseppe have a say – or try to have a say – in the artistic process?

Rifkin: Our mutual respect for one another is sacrosanct. I wouldn’t dare interfere in what he does, and he didn’t ask for a say at all in what I was up to. Because of our history Giuseppe feels comfortable with me, and as a result he generously trusted me with an all-access and unfiltered backstage pass into his mad process. From writing up his obscene poem of a script by hand, to his assembling his cast – which consists of scouring Ventura’s tent city, where many of his homeless cast members live – to watching him shoot an entire feature in two fast and furious production days. My only challenge was keeping up with him. Giuseppe is a force of nature, and when he’s in movie mode he’s a whirling dervish.

Filmmaker: You delve very little into the backgrounds of any of these characters, simply accepting them warts and all as Giuseppe does. We learn that Vietnam Ron is a Vietnam War vet and that Ed played guitar for the Bee Gees, but you smartly keep the focus on Giuseppe, eschewing any “skid row story” approach. Were you at all tempted to include how most of Giuseppe’s trailer park troupe ended up in their impoverished (and often alcoholic) situations?

Rifkin: I was happy to briefly touch on it, but I really wanted to focus on Giuseppe and his process. As a filmmaker myself I was most fascinated with how the hell he made these incredible films. Making a movie is hard enough when you have lots of money to spend and everything is going right! There are countless documentaries by far more skilled documentarians than I about how circumstances and questionable choices have led some of society’s people on the fringe to lives of despair, but that’s not what Giuseppe Makes A Movie is about. It’s not a tale of how someone became homeless or the state of homelessness in America. It’s a movie about how Giuseppe sees these people differently than anybody else in the world. He sees them as actors, as artists and as human beings. He doesn’t judge them, but embraces them, warts (and way worse) and all. He makes them feel special. They’re his muses. I can’t think of anything more flattering than to be considered somebody’s muse.