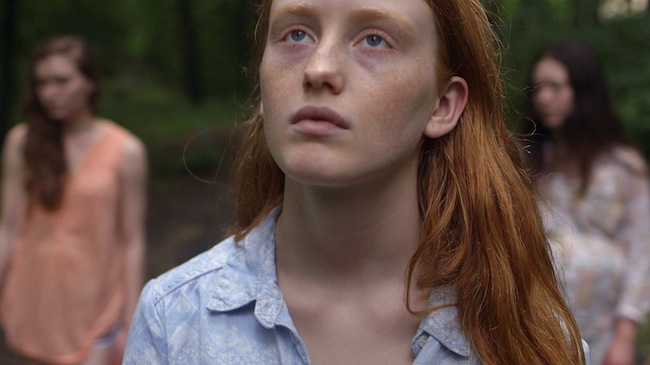 by Sarah Salovaara
in Directors, Interviews
on Jun 12, 2014

Nathan Silver first courted audiences in 2012 with Exit Elena, his charming, claustrophobic take on arrested development through the eyes of a live-in aide. His follow-up, Soft in the Head, also captured an outsider’s rambunctious navigation of new environs, so it should be no surprise that Uncertain Terms, premiering this Saturday at the Los Angeles Film Festival, treads the familiar territory of interloper interrupted. Silver may be a premature embodiment of Fassbinder’s creed that “Every decent director has only one subject and finally only makes the same film over and over again,” but Uncertain Terms feels more patient in execution than its predecessors, mirroring the bucolic enclave which houses a bevy of relatively serene pregnant teens.

Robbie (David Dahlbom) arrives in the Hudson Valley to offer a helping hand at his aunt’s boarding house, played by Nathan’s mother Cindy Silver in a bit of intertextual casting. He may have come for peace of mind, but soon Robbie is unwittingly stirring up trouble with Nina (India Menuez), her baby daddy Chase (Casey Drogin) and the deluded Jean (Tallie Medel). Filmmaker spoke to Silver about the film’s personal origins, executing outlines and the dire state of the teen pregnancy genre.

Filmmaker: I want to first ask about your decision to begin the film with Robbie listening to a Filmwax interview with you as he drives to the compound. What is that about?

Silver: We wanted talk radio there, and I immediately thought of that scene in In a Year of Thirteen Moons when Elvira is flipping through channels and an interview with Fassbinder pops up.

Filmmaker: Did you see much of the Fassbinder retrospective?

Silver: No, I sadly didn’t make it to a single one. We were doing the sound mix and color correction at the time.

Filmmaker: Well, in the context of Uncertain Terms, which unfolds in an enclave, what do you think this metafictional layer achieves?

Silver: Achieves? Well, I wanted to have a subtly jarring opening to complement the jarring ending when reality bursts the bubble of the idyll.

Filmmaker: A recent article called this your most accessible film. Do you agree?

Silver: I’d love to hear your thoughts on this. That’s for critics and audiences to decide, no?

Filmmaker: Right, well, it’s probably hard for you to be objective. I think this one has a clearer arc than say Soft in the Head or Exit Elena. Would you call it a romance?

Filmmaker: Would you call Soft in the Head a romance?

Filmmaker: Was that deluded connection the kernel for both?

Silver: With Soft in the Head, it only became clear during shooting that the relationship between Nathan and Natalia would figure heavily into the story. With Uncertain Terms, Chloe [Domont, the producer and co-writer], Cody [Stokes, the d.p., editor, and co-writer], and I wrote the outline knowing that it was about an unlikely romance, and that the characters had to be slightly delusional in order to go through with it.

Filmmaker: Where Natalia is caught between her own psychosis and Nathan, Nina has to choose between two men, though Robbie would certainly seem the obvious option. It is, I will say, in line with your sensibilities to set a romance in a home for pregnant teens. The scene with them dancing to “My Neck, My Back” made me blush.

Silver: Glad to hear it. Going back to Robbie. Is he the obvious option?

Filmmaker: Well, for me. Not for Nina. Can we talk about the casting a bit, which is as on the nose as ever. You are working with a greatest hits of current indie actresses — Tallie Medel (The Unspeakable Act), Hannah Gross (I Used to Be Darker), Gina Piersanti (It Felt Like Love), and of course, Cindy Silver — but how did you come across India Menuez, who plays Nina?

Silver: All thanks to Chloe. Chloe had crossed paths with her in the fashion video world.

Filmmaker: Ah, the fashion video world. Well what was it about her that convinced you to cast her?

Silver: She has this insanely natural playful quality to her.

Filmmaker: Were you able to rehearse on location at all? The film feels very atmospheric. I think it harnesses the natural surroundings where your previous films harness the physical, i.e. people.

Silver: We would rehearse the scenes the day of, but we didn’t have a block of time before the shoot began. Harnessing the atmosphere is all thanks to Cody. It was probably a relief for him after shooting in tight apartments in NYC for Soft in the Head.

Filmmaker: When you rehearse the day of, were they not improv’d at this point?

Silver: Chloe, Cody, and I would meet at the beginning of each day and come up with lines for each scene. The actors would use these as a starting point and improvise from there.

Filmmaker: How did that work in the quasi-therapy sessions? There are some really excellent monologues that are able to provide necessary contextualization for the characters in barely a minute. Tallie’s is great.

Silver: You’re talking about the scene in the woods?

Filmmaker: Yes, when the girls circle up with your mom. Did you carefully divise backstories for each?

Silver: I’d discussed back stories with all the actors, yeah. Whenever there was down time, Chloe and Tim [second unit d.p.] would go out and shoot the girls talking about their lives. We didn’t know how we were going to use it, but knew that it was necessary for the edit.

Filmmaker: And were you not always present for that?

Silver: No, I wasn’t. Chloe and I would talk about things to hit, and then she would go off with Tim and shoot.

Filmmaker: Were you living in the house while shooting there?

Filmmaker: Whose house was it?

Filmmaker: So did you conceptualize the film knowing you had a location? Or had you always wanted to make a film set at a group home for pregnant girls?

Silver: My mother was a pregnant teenager in real life and went to a home for unwed mothers, and I always wanted to address that in some form in a film. Chloe happened to have a fascination for stories about pregnant teens. We started talking, and eventually came up with this. My parents moved into that house just weeks prior to the shoot, and it seemed like an ideal location for this enclave.

Filmmaker: Are there any other films for you that adequately address the travails of a young pregnant woman?

Silver: See You Next Tuesday.

Filmmaker: We love See You Next Tuesday. How about ones that were a reference point at the time?

Filmmaker: Can you think of common pitfalls in the genre, or what it’s lacking? Or was that simply not a concern?

Silver: That wasn’t a concern, no. I can only think of Juno, which is a piece of trash.

Filmmaker: We all hate Juno. What is it about See You Next Tuesday that works for you? An important aspect of Uncertain Terms, I think, is an awareness, but also a lack of self-pity amongst the young women. There’s no real sense of foreboding about their condition.

Silver: The fact that we don’t pity Mona [See You Next Tuesday‘s protagonist] because she’s pregnant — in fact, maybe it comes down to lack of pity in movies. Maybe I hate pity. I hate this idea that because these girls are pregnant we have to pity them. My mother doesn’t want to be pitied.

Filmmaker: How was it for your mother playing the opposite side of the coin?

Silver: I think it was rough for her to talk about her memories, like in that one scene where she’s the passing the photo album to the girls.

Filmmaker: But when you told her this was your next film, she was immediately game?

Silver: Yeah. I mean, she’s a reluctant actor. She hates acting. I think the fact that she had to act was more painful for her than the content.

Filmmaker: Reluctantly prolific, no thanks to you.