“A Relationship is Never a Straight Line”: Joanna Hogg on Exhibition 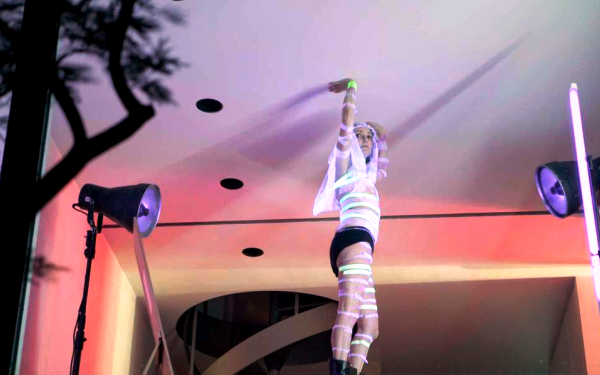 by Sarah Salovaara
in Directors, Interviews
on Jun 20, 2014

“It’d be nice if you could come up here, maybe distract me from my work,” H (Liam Gillick) tells his wife D (Viviane Albertine) at the start of Joanna Hogg’s surprising and stunning new film Exhibition. The two speak via intercom, from separate stories of their postmodern London behemoth, and Hogg’s film is as much about communication, or lack there of, as it is about staving off our most prized objectives. D and H — both artists, only one of whom is “successful” — have decided to sell their house after living there for nearly 20 years. That decision, or rather, acquiescence on D’s part, deepens a sideways examination of her attachment to objects, people and art. Filmmaker spoke with Hogg about shooting chronologically, financing treatments, artist relationships, and why people can leave even the most beautiful houses. Exhibition opens at the Film Society of Lincoln Center today; Hogg’s previous films Unrelated and Archipelago will screen starting June 27.

Filmmaker: I wanted to start with D and H. Exhibition does a lot of things well, but one in particular is its depictions of artists. When filmmakers have artists for protagonists, so many are tempted to focus on their work and relay it as a projection of themselves. It’s hard to motivate them authentically. Exhibition resists this temptation by not confronting their work head on. Why was this aspect secondary in your characterization?

Joanna Hogg: What I wanted to do was convey what the home life of two artists living together might be like. I wanted to show intimate moments that others wouldn’t be privy to. Small moments, every day moments, of what life is like in a house like that. I was interested in how two artists can live together when engaged in different creative practices, and the struggles it begets from the female perspective. D, on the one hand, is a nurturer: she looks after her husband and takes care of him, but she also wants to control him in a sense, which she is unable to do. She’s a mother, she’s a wife, but she’s also an artist. That doesn’t always work with the other roles, because, in reality, her personal life isn’t separated from her work. There are moments where she is easily distracted by her husband, and she puts off her work. I identify with that myself because I live with another artist, but we don’t work together.

Filmmaker: I also appreciate that she’s not unable to accomplish what she wants because she’s burdened by “working mother” syndrome. I like that she doesn’t have kids, and it’s still hard for her to play these roles of wife and artist, which is something that’s rarely addressed in film. Generally speaking, your camera resists the emotionality of the characters — you tend to shoot wide and fixed, regardless of the situation. Why do you like to offset the action with objective cinematography?

Hogg: I like seeing things from a certain distance. I’m more of an observer than a participator, so a lot of that stems from me personally, to have a safe distance between myself and what I’m looking at. I’m aware of the distancing effect it can have on some audiences, but if you look at the complete picture of something, you learn more than you do than if it’s a close up. I’m interested in body language. I like the old Hollywood thing, when musicals were all wide shots, and you could see Fred Astaire dancing head to toe. I thought of Exhibition as a dance, and I wanted to inhabit the house, the film, with characters and bodies. Of course, this conversation about cinematography makes me think about my choices, and I’m always looking to challenge myself. Maybe next time, it will be shot differently.

Filmmaker: The house is an integral part of the film, not just because of its part in the storyline, but also in how it determines D and H’s interactions. I love when they speak through the intercom. Did the house come first, or did you stumble across it after the script was written?

Hogg: The house came before anything else. I knew James Melvin —

Filmmaker: Is that who the film is dedicated to?

Hogg: Yes, he was a great architect, mostly commercial buildings, but he built this house for him and his wife after their children went off. It was sort of built with the idea that they’d grow old there, and in a way, it’s not very child-friendly. So I was introduced to the house in the early ’90s, and when I started to think about a story about a couple of artists, I began weaving characters into the space. Because I knew the space so well, it was a bit like putting dolls in a dollhouse.

Filmmaker: Was anyone living in the house before you moved in for the shoot?

Hogg: There were people living in the house and they had to move out for the two months we shot there. I work with a great production designer and costume designer, Stéphane Collonge, and we walked around the house together and we talked about what changes we might make, and then we realized that everything there already was right. There were just so many gifts in the house. And as a result, the costumes came from the house. The stripey tops that D wears came from the Venetian blinds.

Filmmaker: I read that you had Viviane and Liam live there during filming.

Hogg: Liam and Viv lived in the house, and I think it makes a big difference in how the story develops. I shoot in story order, which gives me a lot of creative freedom, because I can make changes as we go on. It’s the same way I made Unrelated and Archipelago.

Filmmaker: So are you going home and watching dailies and then coming to set in the morning with rewrites?

Hogg: I don’t watch dailies. I never like to look back when I’m shooting, I always like to look forward. So I’m observing, I’m adapting. But I did do something new with Exhibition, I started to write entirely new scenes. In the evenings after shooting, I would write something that day. Then, the next morning, I would show it to the actors so they didn’t have time to start worrying about it. And I never showed them my document, my version of the screenplay, beforehand, they just agreed to do it. But I felt like I had to start giving them words on paper.

Filmmaker: So you never had a full script for the film. Was it a treatment?

Hogg: It’s about forty pages, and for me, it’s actually more precise than a screenplay. It’s all description with the occasional line of dialogue, but it’s describing what’s going on beneath the surface. It’s everything I see, but not necessarily what the camera sees.

Filmmaker: In the U.S., because we don’t have any government-related funds, I find that filmmakers have a hard time financing improvisational work. If you go to financiers with a treatment, they may demand something more concrete.

Hogg: I’m gradually gaining that freedom. I’ve worked that way since Unrelated, so when I came to BBC for funding, I had evidence that the way that I worked worked, since Exhibition was made like the previous two.

Filmmaker: So you financed your first film, Unrelated, off of one of your documents?

Hogg: Unrelated was made in such a garage style way, I didn’t have to show anybody anything. The producer managed to raise money from people who didn’t need a say in what we were making. But this was after I put in the hours working for many difficult executive producers and making contacts, so I wanted to do something completely different. Then, Achipelago had more structure in terms of the financing.  And when I went to BBC, you know, a big broadcast company with lots of money, they’re not going to muck around with me and what I make. But if I would have gone to them with Unrelated, they would have said “forget it.”

Filmmaker: Back to Exhibition, you choose to not explain why D and H are moving. H simply tells D, “There’s no children to stop us. We can do what we want.” She resists, but next thing you know, the plot is in motion. Why did you choose to skirt around their reasoning?

Hogg: When you make a feature film, you figure you’ve only got approximately 90 minutes to tell your story. It’s impossible in that time to show every moment that occurs. There are scenes left out between D and H, I’m sure, that show further conversation about the issue, but it was more interesting to me to explore the anxieties of leaving a place you’ve lived in for a long time. For some peoples’ taste, I’m not concrete enough, I get that. But I’m interested in exploring dynamics, dreams, memory. I wanted it to be more about detaching yourself from a place you’ve lived in and loved. At the same time, it makes sense that if you’ve lived in a place for 20 years, and you’re around 50, it might be time for change. I’m dealing with that right now. If I stay where I am for another ten years, will I be in a place where I’m able to deal with that eventual move? Will I enjoy that new place? Further, do you want to live your life only in one place? I think the challenge for people when they see Exhibition, is that they see a beautiful house, and they don’t understand why they would want to move.

Filmmaker: You explore D’s attachment to the house in a physical way. She’s acting out her sexual frustrations with her husband quite literally on the house.

Hogg: One of my aims was to explore female sexuality, and I hadn’t done that with the other two films. I wanted to get to the heart of it, the complexity of it, and the contradictions that occur in a long-term relationship. How sexuality isn’t always directed in the right place, and it’s not always satisfying, but sometimes is. A story about a relationship is never a straight line. I wanted to create one that reflects life.