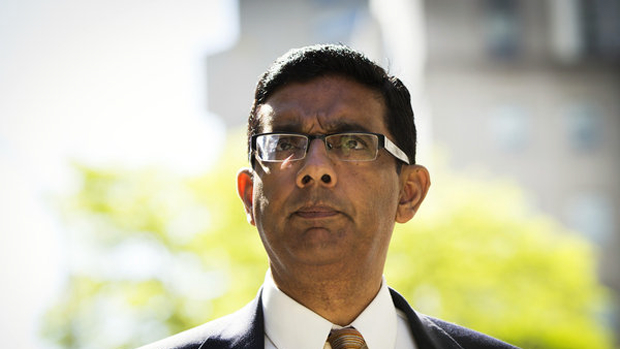 Dinesh D'Souza in America: Imagine the World Without Her

Cities with active repertory theaters offer options for constructing cross-town do-it-yourself double-features, and a chance this Sunday to follow Malcolm X at BAMcinématek’s Spike Lee retro with Dinesh D’Souza’s America: Imagine the World Without Her seemed too dialectically productive to pass up. The connecting common component turned out to be a compact Malcolm soundbite (“We don’t see any American Dream. We’ve experienced only the American Nightmare!”), recited by Denzel Washington at the end of a longer peroration in Lee’s opening credits and presented as a stand-alone snippet from the real Malcolm in D’Souza’s film.

It’s no surprise America ditches the entire speech leading up to Malcolm’s “American nightmare” formulation: twelve words shorn of context are enough to make the ostensibly facile case D’Souza must dismantle, a task he performs with his usual anti-charismatic glibness. In the would-be election year game-changer 2016: Obama’s America, D’Souza put his hand next to Obama’s to illustrate that they were the same color, thereby proving the quasi-academic pundit was qualified to relate to the president’s treacherous attraction to post-colonial studies. Tacitly appealing to a certain conservative audience’s presumable distrust of elitist academia and fear of minorities, D’Souza effectively argued that post-colonial studies have warped the minds of generations of impressionable youth — most notably Barack Obama, who now wants to level the US to the level of a third world power in order to redistribute the wealth.

The film’s long, slow dog-whistle appeal to racists included an interview with Obama’s Kenyan half-brother George, meant to scratch the itch of birth certificate conspiracy theorists whose allegations can’t be directly raised in this presumably more reputable context. So you should be nervous about the primary project of D’Souza’s America, which is to answer certain “indictments” — that America is a thief of global resources, imperialist oppressor etc. — by introducing mitigating historical context, very much on the morally illiterate level of “black people owned slaves too.” D’Souza’s waging war on Howard Zinn’s A People’s History of the United States, which he soberly warns is being taught right in our very own publicly-funded high schools and universities.

Like a cod-Joseph Campbell, D’Souza posits that history up to the US was powered by the “universal conquest epic,” but that the constant warfare to redefine borders was ended by the States. Slavery was part of that “conquest epic”: what was truly American was replacing the practice with entrepreneurship, a bold move considering that “historically, every culture has despised entrepreneurs.” D’Souza seriously posits that capitalism’s benevolently invisible hand has ended slavery and cured all moral and racial ills in the States. He follows this with scenes of Frederick Douglass and Abraham Lincoln having some laughs in the White House while growing to respect each other, and an interlude on the entrepreneurial example of Madam C.J. Walker (complete with a speech from her about the importance of hard work and avoiding self-pity). Finally, implausibly introduced as a “quintessential American,” there’s an interview with the awful conservative pundit Star Parker, who reiterates the importance of getting off welfare and becoming a productive black member of society. (Parker says she stopped taking government handouts when she realized her way of life was “unacceptable” to God [!]) These images, along with some poorly recited Douglass speeches about America’s greatness, represent nearly the sum total of what America has to say about the history of black people in the US.

America is predictably atrociously crafted, with marginal actors reedily declaiming Lincoln’s speeches and many shots of the co-writer/director/presenter demonstrating how American he is: eating a hot dog in Times Square while glaring at Michael Moore (implausibly speaking on the Jumbotron) or beaming in approval from a helicopter at picture-postcard expanses of wide open spaces. For camp devotees it’s not as rewarding as the stupefying 2016, an overstuffed anthology of conservative blogroll memes about Obama bowing to the Muslims and defunding NASA because he wants to enable a caliphate in space. America is (comparatively) restrained, though it does make time for conspiratorial fever dreams about the pernicious influence of Saul Alinsky on Hilary Clinton, their initial meeting at a college cafeteria recreated with technically maladroit delusions of JFK-esque urgency. Both films will form a rich treasure trove for future political scholars.

D’Souza’s attempts to make the past safe for white people in visually cliched terms — in effect, to consciously unlearn anything difficult or still troublesome about this country’s history — climax in a final montage recapping the Moments in American History we’ve seen (unconvincingly) re-enacted. The images confirm this is really about restoring white Americans to a place of unambiguous honor within the historical record — something also made clear by the tacit rhetorical war throughout on welfare queens and reminders that white indentured slaves and black slave-owners existed (white people have suffered as well but they’re not mad!). The final recap boils down to sentimental/fetishistic images of white men dutifully trudging to their doom for a greater good during the Revolutionary and Civil Wars, the better to climax with crowds of smiling white people at small town 4th of July parades, untroubled by any sense of historical wrongdoing, unearned privilege or cause for concern.

Righteously confrontational though Lee’s film can be regarding the historical record, there’s an embedded idea that collective examination of past history can help us think through the present and lance lasting pathologies. D’Souza prefers a much less complicated binary: either America must commit suicide for the greater good, or it’s flawless. D’Souza’s approach to history — to decomplicate, defang, and implicitly decolorize it — is decidedly/predictably different from those of Lee’s Malcolm. The biopic is a rare big-budget film asking audiences to relate to a Great Man not because of his concrete accomplishments or famous moments, but primarily on the basis of his intellectual development. At key points throughout his life, Malcolm is confronted with situations requiring him to rethink both his own relation to the world and the larger problems of articulating and combating both historical and present-day racism(s). American citizenship includes a birthright obligation to think pretty much constantly about racial politics, and Malcolm’s ability to do so while being intellectually honest with himself in changing his guiding tenets and publicly sharing his conclusions seems eminently relatable and honorable — far more relevant and pertinent than D’Souza’s ossified fantasies of a pre-lapsarian, all-white small town America perfectly content with itself.