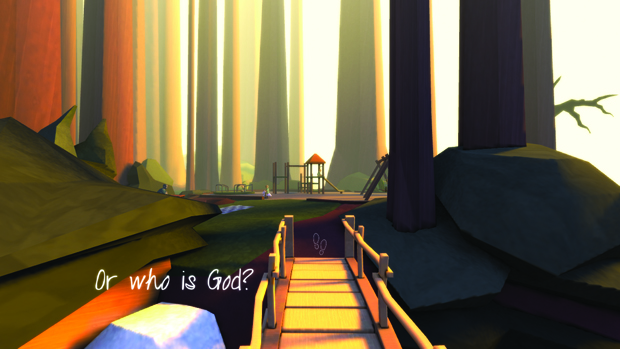 Ryan Green’s son, Joel, was diagnosed with terminal cancer just before his second birthday. There were surgeries. Chemo. Joel’s eyes turned in. He lost his hearing. After work done on his spine, he had to learn to walk again. But he didn’t die, and Green wanted to show the world “the miracle” that was his son.

That Dragon, Cancer, due out later this year on the Android console OUYA, is hard to play. It’s not hard because the controls are difficult, or because there are millions of screens of data to manage or because of puzzles that hurt your brain to crack. It’s hard because you’re in an ICU with an infant son who can’t stop crying and who you know will die — and not in the way we all will die one day, but rather who could die any day. It’s hard because you love your son, and you can’t make him better. You are not in control.

When I spoke with Green, he said, “How are you going to act when the world is spinning, and you can’t stop it?”

The game grew out of one of the worst nights of Green’s life – a night in the hospital when Joel had a stomach bug and was dehydrated and crying endlessly and nothing Green could do helped. Games, of course, are about control. As he tried everything to help his son, Green found himself thinking, these are like game mechanics. Give child juice box. This should quench child’s thirst. Rock child. Child should be soothed. But on this night, none of the usual mechanics worked. Give child juice box. Child throws up. Rock child. Child keeps screaming. And in the game version of this moment of Green’s life, the pain and the frustration and the need to hope even as you’re living this terrible night are all painfully and palpably brought home to the player.

No one should be surprised that videogames can be more serious than Medal of Honor or Gears of War. In the press, That Dragon, Cancer has been labeled an “empathy” game, along with other recent titles such as Vander Caballero’s Papo & Yo, about a child and his abusive alcoholic father. That Dragon, Cancer struck me for another quality as well. It struck me because there is no “story” layer between Green’s experience and our experience playing as him.

I remember talking to Jonathan Blow when Braid first came out. Braid was a kind of proof-of-concept for people that indie games could hit it big. It was an emotionally powerful game, full of sorrow and regret and questions about the nature of reality. Blow was always very clear the game was deeply personal for him. But Braid was a story about a boy on a quest. That Dragon, Cancer is more like engaging with someone’s diaries. There’s no filter. No protective layer between you and the experience’s creator. And the fact that Green is skinless before you makes you feel skinless, too.

In the scene that inspired the game, you’re in a hospital room, playing as Green. As you scroll around the room, you are inside Green’s head, musing about the color schemes of hospitals, and admitting that you did not initially hate time spent there. You hear Green thinking how at first it was an adventure, with himself cast as hero — the all-powerful father, protecting his son against the elements. It’s moments like these that make the game feel so private. Green doesn’t have to tell us he first saw his son’s cancer as an adventure, but he does, and it makes you feel like you’ve stumbled into someone’s intimate, innermost thoughts.

As the scene progresses, Joel’s cries become louder and louder, until the sense of claustrophobia and helplessness becomes nearly impossible to bear. And at the end of the scene, Green does not solve the puzzle of how to make his son stop crying, but rather gives into his powerlessness by dropping to his knees and praying. Green is a Christian, but the moment of surrender should resonate with anyone who’s ever had to face that we don’t have as much control over our lives as we like to think.

“My intention is not to rake people through the mud,” Green said. “My intention with making art is to find the joy and the hope in the midst of the pain.”

In 2012, when he started working on the game full time — along with his wife, Amy, and partner Josh Larson — it was one thing to Green. Today, however it is something else. In March, Joel Green died. If the game started out as a testimony to the fact that Joel had survived, it is now a testimony to who he was and how it felt to love him, Green said.

“I cringe a little at the question of whether this is cathartic for me,” Green said. “There certainly is safety in being able to create something. You get to be analytical and look at the story from the inside out. But there are times when I’ll be working with Joel and my avatars, and I just break down because I want to go back in time and be with him again. But yes, it allows me daily to face the loss of my son and to honor him. And in that sense it has been a tremendous gift.”