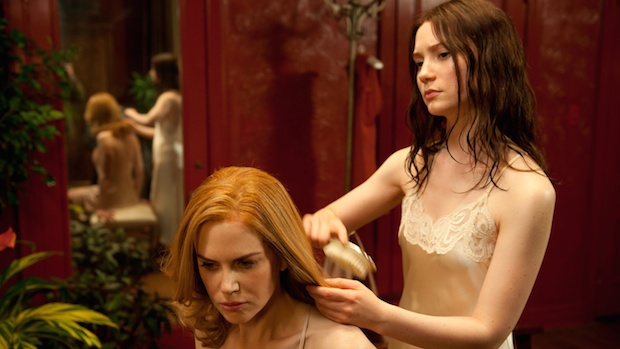 by Laya Maheshwari
in Directors, Interviews
on Jul 22, 2014

“Mr. Park Chan-wook is not giving any interviews. Sorry.”

The Korean auteur was one of the biggest names present at the recently concluded 31st Jerusalem Film Festival, second only perhaps to Spike Jonze (who doesn’t really make for charming interviews). The problem with big names at festivals, though, is that securing a short meeting with them — let alone an interview — is difficult. The curt message from the festival press department, quoted above, is an example of that.

Nevertheless, armed with the kind of resilience and never-say-die attitude that arises naturally out of journalistic passion and an empty bank account, I trekked over to a panel discussion Park Chan-wook was part of. At the end, I walked over to him as gingerly as possible and started a conversation.

“Have you heard of the Indian rip-off of Oldboy?”

It’s embarrassingly well-known that Bollywood has a penchant for “adapting” (read: “plagiarizing”) products from other film industries, right down to their names. So, depressingly, it should come as no surprise that one Indian filmmaker saw the brutal, brilliant revenge thriller that won Park the Grand Prix at Cannes in 2004 and decided to remake it. The result was Zinda (“Alive”), a film whose IMDb synopsis reads: “A man, taken and locked up for 14 years without any sane reason, is suddenly released, and has four days to figure out why this was done to him.”

The two films share many similarities, but Zinda doesn’t go all the way. The mores of Bollywood and Indian society ensure that even a wink at incest is anathema. This meant that the shocking denouement to Oldboy, integral to the film’s theme of revenge helping no one and hurting everyone, would have to vanish. Zinda instead comes up with a watered-down resolution that’s brutal only in its cheesy hilarity. You can see it in its two minutes entirety with English subtitles here. (It’s worth every second.)

I wanted to know if Park was aware of this bastardization and if he was a good sport about it. He turned around and looked at me to answer, “Yes, I have the DVD. Someone gave it to me.”

Filmmaker: Oh, have you seen it?

Park: No, unfortunately. Does it have those song-and-dance numbers?

Filmmaker: Yes. And they changed the ending, of course. A Bollywood film could never have that climax.

Park: [laughs] Oh, did they? I may still see it someday.

As Park moved to the exit of the auditorium, I followed him and asked if I could have some time with him for an interview. He walked away noncommittally. I asked his assistant — who was walking behind him — the same question, and she said she’d try. However, as they descended the stairs and disappeared from my field of vision, I realized this was a lost cause. I picked up my bag and was about to leave when the same assistant came hurrying back and said, “You have five minutes with Mr. Park.”

Well, eight years after release, the existence of Zinda finally resulted — for me, at least — in one good thing.

I followed her to find the filmmaker seated, smiling, at a table in the cinematheque’s cafeteria. I quickly took out my recorder and joined him. These are the results:

Filmmaker: I was actually going to get you a DVD of Zinda, but decided it didn’t deserve that.

Park: I have one already. Thank you for sparing me another.

Filmmaker: Talking about DVDs, Bong Joon-ho once said that he had loaned you a copy of Haskell Wexler’s Medium Cool, but you never returned it to him; you stole it. Do you have something to say to him?

Park: [laughs] I am certainly not going to argue on this. I do remember it. I am sure that I didn’t return his DVD. But the DVD was the kind you find on Chinese streets — it was illegal! So, in a way, I just did everyone a favour.

Filmmaker: Well, when Bong Joon-ho was on a tour promoting Snowpiercer, he went to The Criterion Collection in New York and picked up a new DVD of Medium Cool — this one original.

Filmmaker: When you were making the Vengeance trilogy, were you afraid of repeating yourself at any point? For example, both Sympathy for Mr. Vengeance and Sympathy for Lady Vengeance have scenes where the lead characters talk about there being two kinds of kidnappings: good and bad.

Park: No, I was not thinking or afraid of repeating myself. They are completely different movies. Vengeance — the theme — is the same, but little else. In fact, because there is no connecting point, for the final one, [Lady Vengeance,] I took actors from the first and second movies, [Mr. Vengeance and Oldboy,] and put them in cameos. I wanted to make some connection — a little connection at least.

Filmmaker: But Choi Min-Sik doesn’t have just a cameo [in Lady Vengeance]. He has a major role.

Filmmaker: I was rewatching Stoker last week, and find the movie’s end credits quite fascinating. Why do they scroll upwards instead of downwards?

Park: First of all, blood from the flower [after India, Mia Wasikowska’s character, shoots the sheriff] is flowing downwards. It is to give space for the movement from the top. Second, [Stoker] is a coming-of- age story but in the opposite direction. Generally, in such stories, the person grows and becomes a good person. But, in Stoker it is the reverse. India becomes evil by the end. This is why the credits head in the opposite direction. [pause] Last question please!

Filmmaker: Would you consider directing Uncle Charlie, the supposed prequel to Stoker?

Park: Wentworth Miller has written a script, which I have read. It’s an excellent script! However, it’s not up to me to decide. Fox Searchlight owns the rights and they must decide. But, yes, the script is very good.

And that was it. Surely not the most comprehensive of interviews, but the five questions I managed to ask here were still five more than I had any right to expect. The unabashed pursuit paid off, unless Park actually goes home and pops in his DVD of Zinda. In which case he might want to seek revenge on the person who reminded him to see it.