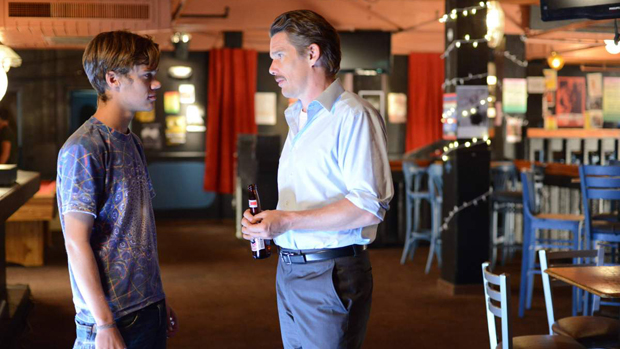 One aspect of Boyhood that’s been relatively underdiscussed (assuming there are any such left) is its use of 35mm, which has been widely noted but little parsed. Richard Linklater’s repeatedly noted that the primary reason for shooting on film over 12 years was to ensure visual continuity from one year to the next. This doesn’t mean he’s a Luddite in any way, as he explains in comments from a recent screening at the BFI on technology’s pros and cons:

There is nothing more stable than a 35mm negative. Had I started on the best HD camera back in 2002, I’d have been on my fifth by now. It was never even much of a decision. But I didn’t like the way digital looked back then, it looks better now, I’ve shot two of my last three films on an ALEXA. We caught a little bit of the death spiral of 35mm towards the end. But it was still good to hear “check the gate.” It is dying. But technology is great. In 2002 and 2003 we were getting booms and mikes in the shot and things and I would just joke “we can fix that with the technology of the future.” It was funny, but I wasn’t really kidding; it came to pass. It became incredibly inexpensive. For example, even just a month ago, I was showing the film and I hadn’t “finished-finished” it, and there was some poster in the background from the National Football League which it turns out we didn’t have the rights for. So we were like “screw you, we can fix that.’” Back in 1993 that would’ve meant thousands of dollars on rotoscoping to take it out. I like technology in that way!

Rumors of the death of 35mm have been slightly exaggerated: see, for example, a Kodak round-up from earlier this year of Sundance titles shot on their stock. Beyond the easily identifiable presence of grain, what are 35mm die-hards talking about? Boyhood provides some practical answers to this question throughout: its glossiness and colors look sculpted and lit, with rich green grass in that poster-covering opening shot of young Mason (Ellar Coltrane) sprawled on the grass and some particularly heightened red curtains popping out in the final scenes of Mason and his father (Ethan Hawke) talking inside a club. The scenes taking place outside at night remind us how much light celluloid needs to capture detail in the dark: the first conversation we see between Mason and his first major girlfriend at a party are nearly haloed out, with strong lights glowing behind them.

The irony is that Boyhood may be shot on film but it was edited digitally, timed as a digital intermediate and IFC hasn’t struck any prints: its origins have resulted in a product that can only be seen digitally. Relevant supplementary example: Philippe Garrel’s Jealousy (to be released later this year) was shot on film, but American viewers probably won’t get to see it in that format. It wasn’t even shown that way at the Venice Film Festival: as cinematographer Willy Kurant told film writer/translator Ted Fendt in an email he shared with me, “We received a call from the festival asking for a DCP. Their projector was broken and they could not find replacement parts.”

Perhaps shooting on film should now be thought of as the starting point for post-production work, providing a visual base to tweak and build upon — the first part of the production chain rather than the starting and ending point of a loop, a relatively expensive effect like any other. And for Boyhood, the format reinforces the project’s underlying emphasis on remembering the recent past: we, and Mason, recall what’s taken place in a nearly-expired format that’s itself a historical curiosity, inaccessible except through a different kind of projection.