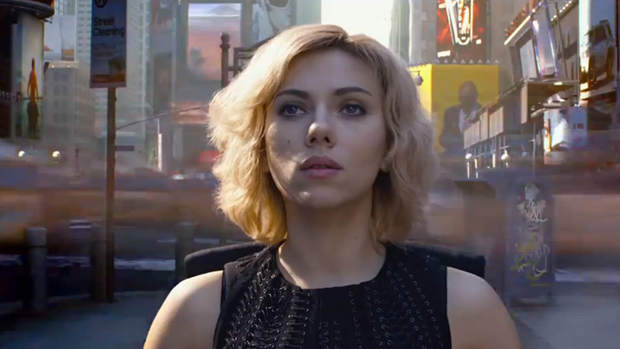 In a statement published in the Nov. 24, 1962 Film Culture, Pier Paolo Pasolini thought about how a simple metaphor can be conveyed onscreen, starting from one solution he rejected as overall unsound:

“Let us consider the following written or spoken statement: ‘Gennarino looked like a hyena.’ […] The attempt has been made to juxtapose a hyena with Gennarino by joining two frames: one showing Gennarino grinding his teeth and the other showing an actual hyena with its teeth bared. Now, I won’t say that something like this could never be done legitimately. But it would be inconceivable to think of a film proceding along these lines for a period of two solid hours.”

Luc Besson doesn’t go to that durational extreme in Lucy, but he’s daftly fearless enough to start with even blunter visual metaphors. Dragooned drug mule Lucy (Scarlett Johansson) is visually compared to both a rodent approaching cheese in a mousetrap and a gazelle attacked by a pride of lions. This isn’t intercutting as Eisensteinian juxtaposition or Roegian mystification, but vigorously simplistic deployment of very basic cliches. Doing so without expository grounding, in however intellectually rudimentary fashion, is a level of unapologetic metaphor not normally seen in Hollywood films, summer fare or otherwise.

Lucy’s story (club drugs seep into her system, allowing her access to 100% of her brain) never stands alone for long: first she shares space with professor Samuel Norman’s (Morgan Freeman, naturally) super-speculative lecture/expository explanation, itself interrupted by e.g. illustrative montages of dolphins to demonstrate advanced bodily control through increased brain power and so on. But Lucy’s superhuman transformation mainly shares narrative space with sequences from a typical Luc Besson action film: gunplay and the careless disbursement of endless bullets, a long sequence of automotive mayhem instigated by driving a car the wrong way through Paris traffic (a sequence that’d fit seamlessly into Besson’s Europacorp Taxi or Taken franchises), a casual disregard for the niceties of racial representation. Executed with greater vigor than anything since 1997’s The Fifth Element, at a comparatively trim $40 million, the sequences save visible CGI for Lucy’s beyond-reality odyssey.

Taiwan, deeply invested in attracting film productions, made shooting in Taipei an attractive choice, though Besson largely stays inside; no touristically-minded push or undercurrent is discernible. Taipei is present not so much as itself as an acceptable urban location, two of which are necessary to construct a narrative bifurcated by a flight. (SPOILERS FOLLOW) Lucy’s access to more of her brain capacity results in an ability to manipulate her own body, physical space, and all forms of matter. Downside: on the plane, Lucy literally starts dissolving, as her advanced cells free themselves from her body, helixes leaving to autonomously reproduce elsewhere. For me, this was a minute half of pure, inexplicable and bracing delirium — eventually explained by a repeated excerpt from an earlier Norman speech about advanced cells leaving their host organism to reproduce and preserve their acquired knowledge autonomously. My scientifically-minded viewing companion’s mind lept ahead and saw this scene coming, while I got a freaky surprise: two people with different interest levels in science could have a totally different experience watching this movie.

At her superhuman near-apex, Lucy registers the world as a gigantic touch-screen, scrolling left and right to shuffle through time and space, in passing confirming Minority Report‘s status as the most recent sci-fi film to be eerily accurate about what the everyday technology of the future would look like. (“I’m really, really proud of all of the inventions that my team and myself came up with that made Minority Report a story of the near future,” Spielberg said this year. “But I’m also angry at myself for not getting patents on all of my ideas because otherwise I could have owned Facebook and iPhone.”) Her ultimate destiny is dematerialization into pure matter, which involves a transitional state morphing into a Cronenberg-esque oragnic-supercomputer: a sort of singularity is a way-station on the road to transcendence.

Lucy’s half offers up the conceptual CGI imagery, while her Korean drug lord mobster stalker/antagonist (Choi Min-sik), left unkilled out of stupid narrative necessity, provides an excuse for a shoot-out full of wall paneling and statues to register bullet imprints. Lucy‘s two strands co-exist, intercut but separate; the pleasure is in ricocheting between two incompatible elements for an entire movie, making those blunt opening juxtapositions surprisingly indicative of what’s to come.