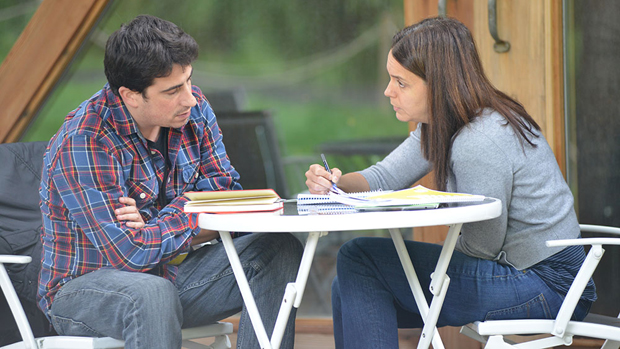 The following is a guest post from We the Animals producer Jeremy Yaches, who was a Producing Fellow and the Mark Silverman Honoree at this year’s Sundance Creative Producing Lab.

The Sundance Creative Producing Lab was a transformative experience.

I arrived a mess of nerves, pre-occupied with the overwhelming stresses and responsibilities that come with my role as executive producer and co-owner of a small but growing commercial and branded content production company, Public Record.

We had just been awarded a large and complicated campaign for a national chain on a Friday and I was scheduled to fly to Sundance the following Monday. I’d set aside the weekend for final lab preparations, but now I was using that time to kickstart pre-production on the new job while simultaneously handing it off to a seasoned line producer.

The lab prep was sacrificed and once again We the Animals, the feature I’d been developing the past two years with my friend and business partner Jeremiah Zagar, had to take a back seat to more pressing concerns.

Monday morning arrived. Tired and anxious, I boarded the plane for Sundance. I settled into my aisle seat and began reading the screenplay for Tracktown, which was the last major task in my pre-lab “homework.” I’d previously read scripts from my other fellows, and each was unique and wonderful in their own ways. But Tracktown stood out to me as a project I could really relate to. I loved it, and when I reached the end, a certain calm washed over me. All of that other stuff was thousands of miles below. It was time to focus on my movie.

Later that day, after arriving on the Sundance campus, I was introduced to our advisors. Between them, they had produced an embarrassment of great movies, including some all-time favorites like Hedwig and the Angry Inch, Sugar, Happiness, and Beginners. Pam Koffler, Paul Mezey, Julie Lynn and Jay Van Hoy — these are incredibly successful producers, surely busier than I, but it became increasingly clear that they too had left their hectic lives behind for the week, and they were here to focus, remarkably, on us. It was an infectious form of generosity that snuck up on me the next day, when Julie Lynn began our first group session by leading a creative discussion on each of the fellows’ scripts, with my film first in line for feedback.

We the Animals is based on a best-selling novel by Justin Torres. Our adaptation, co-written by Jeremiah Zagar and Dan Kitrosser, had been through the Sundance Screenwriters and Directors Labs at this point, but it still had problems. One by one, the panel of award-winning producers weighed in, along with the Sundance staff, and David Lowery and Mary Harron, two great directors who were also on the mountain serving as advisors. I was struck by their thoughtful questions and good ideas. All of these successful strangers had carefully read our script, watched our documentary In A Dream, and had familiarized themselves with our goals for the film. I furiously took notes and when I reviewed them later that night, I realized my understanding of the film had subtly deepened and that issues I’d glossed over in the past became clearer and more manageable.

Topics of discussions the following days included communication issues, director/producer relationships, budgeting, and raising money. As the sessions progressed, I began to feel more and more at ease. This was a safe place where we could finally let down our guard and say “I don’t know” or “I need help.” There was a helpful “cone of silence” in place so that honesty and forthrightness were possible, without fear of misuse or exploitation. The advisors and staff came to the table with sensitive information: financial models, deal points, their own personal communication issues from set — all incredibly helpful information that is not regularly accessible. I felt my own confidence expand, and saw it in the other fellows as well. The ability to ask questions, challenge one another and be challenged without consequence was a rare gift that I’m just now slowly beginning to comprehend.

Back in New York where I worked, there was a pressure to have an answer for everything at all times. Whether the question came from one of my directors, or from a client, or from someone on our staff, the burden was often on me to come up with a solution. Lately, this responsibility was starting to take a toll on every aspect of my life. We as producers spend our days solving problems, organizing big teams, and sinking knee-deep into a pool of logistics and processes. So at Sundance, for one solid week, the producing fellows are given relief from these patterns and expectations. You’re encouraged to put away your email and turn off your phones — there’s hardly reception anyway. All of our meals are taken care of, there’s a staff in place to gently keep us on schedule, and every group meeting, one-on-one session, and event is just a short walk away. When it’s time to go to sleep at the end of the day, there’s a shuttle bus waiting to bring you to your beautiful cabin-like home in the mountains.

In other words, the Sundance Creative Producing Lab creates a space where producers can relax, reflect on their work and focus on themselves for once. In this environment, I was able to realize how important We the Animals was to me, and that I had to make big changes in my life in order to prioritize it. For that, I will always be grateful.