“Burn That Film! Burn It!” Tsui Hark and Patrick Lung Kong on A Better Tomorrow 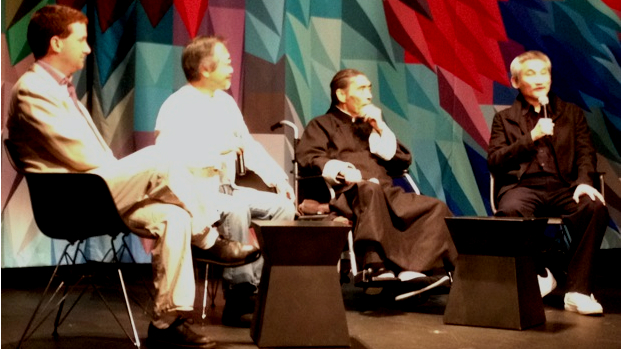 It’s not every day a director comes on stage in Buddhist monk’s garb and slippers, but such was Patrick Lung Kong’s refreshingly idiosyncratic appearance Saturday night at Queens’ Museum of the Moving Image, two days into a two weekend retro of his work. To his right was Tsui Hark, who himself reshaped the Hong Kong film industry multiple times: with 1986’s Peking Opera Blues, a breakthrough moment for international recognition of HK martial arts fare, 1992’s Once Upon a Time in China, and as producer on John Woo’s 1986 A Better Tomorrow, among many other instances.

1967’s The Story of a Discharged Prisoner served as the inspiration for Woo’s game-changing introduction of Chow Yun-fat in two-guns-blazing mode. Lung Kong’s film is about an ex-con just out of jail trying to keep straight while all society makes it tough for him. “A man went into jail, paid whatever he should, comes out as a clean man, but isn’t treated like that,” he said. “From those kinds of thoughts, I started writing this film.” The production company wasn’t happy with his proposed sophomore follow-up to 1966’s successful Prince of Broadcasters. “The first question they asked me: ‘You want to commit suicide? This kind of material, you should never touch. Bad ending, bad characters, all that,’” he recalled. “I didn’t say a word. They urged me, ‘Come on, come on, start the next one,’ because the first one was doing very good. I said, ‘You don’t allow me to do it.’ They said, ‘You don’t even accept changing the ending? Make a happy ending. Kill all the bad guys.’ Then I said, ‘You make it.’ Finally, they didn’t change my script and gave me 20,000 more Hong Kong dollars for capital.”

The film’s premiere was equally contentious, with homemade bombs littering the theater. Protesters called “and said ‘Burn that film, burn it!’” Lung Kong said. The timing was off, with Hong Kong embroiled in riots, and demonstrators targeted a government official Lung Kong had invited to the premiere. “The audience just stepped over the bombs,” Lung Kong said, lifting his foot gingerly to demonstrate. “Thank god, it broke all the records. That’s why I had a third film to make.”

For Hark and John Woo, the film’s tremendous success left a tremendous mark personally. “The film had tremendous impact on people looking for value in society in the ‘60s,” he recalled. “Those characters touched us when we were teenagers. I saw the movie when I was 15 years old, John Woo I think was a little older than that. I had that movie in my mind for quite a long time. On and off, I thought of something I could do inspired by the movie. I worked in New York for a period of time and went back to Hong Kong in 1976. That was the beginning of my career in television in Hong Kong. After six months of television, the person in charge of TVB asked all the directors in the station to give any interesting input for a new series. I proposed The Story of a Discharged Prisoner. Luckily, they didn’t respond to the idea, and that’s why we had the chance to do the movie instead of TV.”

Later, shooting his classic Shanghai Blues, Hark cast Lung Kong “since I really was looking for a chance to befriend our most respected director.” While shooting, he asked for permission to remake Discharged Prisoner and got it. Then, while acting in Woo’s 1985 Run Tiger Run (literal title: Two Tigers), the two bonded over their shared respect for the film. “We did a lot of thinking and character redesigning,” he recalled. “At the end of the day, we found that there’s no way you could use the same story, because it would be not as good as the original.” After all their work, “the only thing that we kept in the story was the discharged prisoner and the brother as a policeman.” Both films also share the same Chinese title, True Colors of a Hero, “because we thought it would be a tribute to Long Kung’s film, and that hopefully in the future the two films could be put together, which is happening now.” It’s a classic now, but production was almost as contentious as it was for Lung Kong, he recalled: “A Better Tomorrow also went through a very similar fate, but not as bad. The film was about 70% finished under the supervision of Cinema City, and we were told to burn the film, because they thought it was very badly made.”

“His is much better than mine,” Lung Kong said of tomorrow, provoking audience laughter. “Why you laugh like that? You don’t believe me? I only got like HK$12,000 for the whole film, and he got nine million. So why are you laughing?” The biggest difference he perceived? “A lot of guns. A lot of beautiful fighting. The big question is how much you get in your pocket to make the film.”

Lung Kong is himself a trained fighter. One of his big parts was in 1996’s Black Mask, which Hark co-wrote and produced. “I fought 38 days with Jet Li,” Lung Kong recalled. “I said, ‘This time Tsui Hark is really killing me.’ He built a set in the studio and filled it up with five or six feet of water. That means we are working upon the water. The most dangerous thing is, if anything drops from above, I mean the electrical wires, we’re all gone. And I stand there for 38 days! Actually we fought 27 days, and then he said, ‘Oh, very good fighting, fight longer.’”

These days, Lung Kong says, he’s “a hundred percent retired. No more film for Lung Kong. If I want to make another film, I should let myself live a quite and peaceful life and go to whatever heaven or hell. Because making a film is a really hard job, no fun at all.” If he were to make a film now? It’d be “about Buddhism, because I learned a lot from Buddhism lately, because my wife is a believer. After studying a lot of this theory, from their bibles, this is very clever. If I had known this much earlier, my life had maybe changed a hundred percent.” Yes, said Hark: there’d be no Discharged Prisoner.

One last note: Woo couldn’t be there, since he has to finish production on his new film by month’s end, but he sent this tribute video: