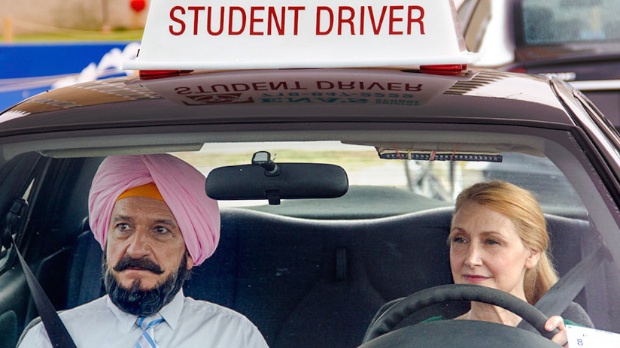 Reteaming director Isabel Coixet with her Elegy stars Patricia Clarkson and Ben Kingsley, Learning to Drive is an adaptation of Katha Pollit’s 2002 New Yorker essay about a Manhattan writer (Clarkson), facing a sudden break-up, who gains wisdom from a driving instructor (here a Sikh played by Ben Kingsley) going through his own relationship evolution. It’s Coixet’s eight film, and below she answers questions about the process of adaptation, her interest in intimacy and the challenge of shooting in moving vehicles. A world premiere, Learning to Drive screens at the Toronto International Film Festival on Tuesday, September 9.

Filmmaker: Your film is based on a 2002 New Yorker essay. At what point did you become involved with this project, and why were you attracted to it?

Coixet: I shot Elegy with Patricia Clarkson and Ben Kingsley in 2008, and Patricia started talking about Learning to Drive then. She gave me the script and I was blown away by it. It was — it is — a great story about human connections surpassing race, age, time and religion. It’s full of tenderness, with a sense of humour and light, and I was attracted to it because of that and also for a very personal reason: at that time I was going through a break up and I was learning to drive for the first time in my life. I also realized all my films are full of tragedies and darkness, and I wanted very badly to make a film that showed some kind of hope and lightness, even if it’s a film that touches lots of questions about the world of today.

Filmmaker: How was your direction of Patricia Clarkson shaped by your previous work with her? What was different this time?

Coixet: What can I say about Patricia ? I think she’s the most talented actress of her generation, and it’s always a blast to work with her. As the lead actress in Learning to Drive she’s just magnificent. Her involvement in the project has been incredible from the beginning, and it was just a pleasure watch her grow and become Wendy. How do we work? Sometimes I think we’re the female version of Werner Herzog and Klaus Kinski (minus the weapons.) We argue, we fight, we scream and we laugh (a lot). I think directing Patricia is part being her best friend, part being her best enemy, and part being her baby-sitter. It`s a very peculiar creative process I enjoyed enormously and I suspect I’ll work again with her very soon.

Filmmaker: Car work can be some of the most difficult scenes to stage, whether the camera is handheld in the back seat angled forward or on a process trailer outfitted with all manner of light and grip equipment. How did you design the car scenes for this film? What were you trying to achieve with your use of camera here?

Coixet: That was my main worry when I was drawing the storyboard. Forty percent of the scenes are set inside the car, and I was very concerned about finding a natural way to shoot there without being intrusive and without placing the camera in completely odd points of view. I was concerned too about depicting New York in summer, since it’s something we have seen before in many films. I’m happy I had the opportunity to show places in NYC what you never normally see, like Richmond Hill or Queens. I’m also the camera operator of of my films so I’m used to being in very difficult circumstances and environments. At the end the most difficult thing was the heat: I never sweated so much than last summer shooting inside Darwan’s car with the air conditioning off (because of sound). Me and the camera assistant almost died of dehydration. But it was worth it! I think there’s a moment you forget they are on a car: you just are entangled in their relationship.

Filmmaker: What sort of collaboration did you have with Sarah Kernochan, and what was the challenge of expanding a New Yorker essay into a feature film script?

Coixet: I think the main challenge was to translate the spirit of Katha Pollit’s essay in the film. Sarah changed the original Filipino character for a member of the Sikh community, and I think it was a very good idea because we had the opportunity to portray a very unknown social and religious group. For me, and for everyone involved in the film, it was a true discovery, and we learned lots of things about them. The Sikh community of Richmond Hill were really helpful in all the steps of the production.

Filmmaker: Relationships and intimacy have figured in many of your films. Are you own interests in these depictions changing as you grow older and as you make more films?

Coixet: Yes, intimacy is my main obssesion. How to live it. How intimacy can change us. How it can also fool us. How some people spend their whole life avoiding it. How intimacy can lead to tragedy. And how to portray how two people connected without words, almost with no gestures. Learning to Drive is the first film I do where there’s pain (of course!) but no tragedy or drama. I tried to show how blind we are to the realities of people who are just in front of us on the subway and how being just a little open to them can make this world a little less shitty. As I grow older (even if underneath I think I`m growing younger!) I’m more open to other realities, and the fact I’m from Barcelona but I work all over the world makes me be much less judgemental. I just finished a film with Juliette Binoche in Norway, and I`m going to Chad to do a documentary about a woman, Rose Lokkissim, who was tortured and killed by Hissene Habré’s police. I’m relentlessly curious about (almost) everything. Even Kim Kardashian!