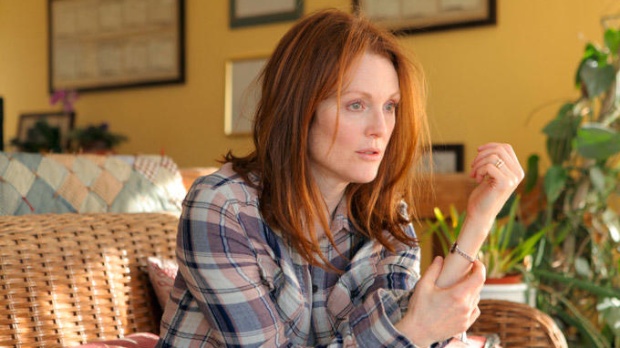 by Scott Macaulay
in Directors, Interviews
on Sep 8, 2014

In Still Alice, based on Lisa Genova’s novel, Julianne Moore plays a Columbia University linguistics professor with early-onset Alzheimer’s disease, a diagnosis that threatens to erode her relationship with her family as well as the city she has long called her home. With a supporting cast including Alec Baldwin, Kristen Stewart and Kate Bosworth, Still Alice promises a realistic depiction of the disease by one of America’s finest actresses, and it’s a return to character-based human dramas by the directorial duo of Richard Glatzer and Wash Westmoreland, whose films include The Last of Robin Hood, the Sundance Grand Prize-winning Quinceañera and, back in 1983 (and directed by Glatzer only), Grief. Below, we asked the directors five questions, ranging from queries about working with Moore to their own longevity in the independent scene.

Filmmaker: From Richard’s Grief, which we covered in Filmmaker back in 1993, to this new film, your work seems to have run a stylistic gamut. How does Still Alice differ from or resemble past works? What were you trying new this time?

Glatzer and Westmoreland: If you look at our five films they are all very different but also have consistent themes. There is probably more similarity between The Fluffer and The Last of Robin Hood because they are essentially about sexual outlaws. Quinceañera has more in common with Still Alice in terms of its family focus and humanism. Both these films invite an emotional involvement from an audience — Alice is a very intense and difficult journey but hopefully a worthwhile one. We were influenced by Ozu’s masterpiece Tokyo Story (which also has a passing reference in Grief) in terms of both the family structure, the lack of sentimentality, and the accumulation of emotional power through restraint. We’re also huge fans of contemporary French cinema, from Assayas to Audiard, and we got to work – finally! – with Denis Lenoir, Assayas’s DP, on this, who shoots in exactly the kind of style we wanted. This is the best film we’ve ever made.

Filmmaker: Julianne Moore plays a linguistics professor, a resonant occupation for a woman losing her cognitive abilities. How does linguistics — and the idea of language — function in your film?

Glatzer and Westmoreland: The original first shot of the movie was a giant word, “language,” typed on a computer screen. We cut it because it felt just too literal, but language is a continual focus of the story. Being a linguistics professor, Alice is painfully aware of the increasing limitations and barriers presented by her condition. In one scene, when her daughter asks her to describe what is Alzheimer’s feels like, she says, “I can see the words hanging there, and I can’t reach them, and I don’t know who I am anymore.” Perhaps, the greatest tragedy of Alzheimer’s is that the reduction of language, in concert with the impairment of memory, leads to an ever decreasing sense of identity. What you see in the movie is Alice using every means at her disposal to resist this process, finding other ways to communicate and retain her selfhood even in the absence of language.

Filmmaker: How did Julianne prepare for the role, both with you and on her own?

Glatzer and Westmoreland: Julianne is a powerhouse. There’s a reason so many of her movies are stellar and so many of her performances are standouts. She is an intensely committed, brilliant person, and her preparation for this role was thorough in the extreme. We talked about the project for about a year while we were making Last of Robin Hood and had a great open exchange, but her process was ultimately her own. With the support of the Alzheimer’s Association she was put in touch with people in the field and was able to visit support groups, form friendships with people with early-onset Alzheimer’s, and even go through the testing procedures used by neurologists to diagnose Alzheimer’s just as a patient would. By the time she came on set, it was all there.

We organized the schedule to be as chronological as possible and worked the hair and make-up, costumes, cinematography and production design in concert with the different phases of the disease. But everyone in the production, from her costars to the PAs, immediately sensed something special was happening with Julianne’s performance, and it brought an extra level of commitment from the entire crew.

Filmmaker: Your film is adapted from Lisa Genova’s novel, but I’m wondering if either of you have had experience with family members and Alzheimer’s disease that factored into your interest in doing this movie.

Glatzer and Westmoreland: Neither of us has had experience of Alzheimer’s in our families but we did have a very unusual circumstance that propelled us toward this material. Richard had been diagnosed with ALS early in 2011 — it was later that year we were approached to adapt the book of Still Alice. We thought it might be too much to take on, but once we read the book, we saw enormous parallels between what Alice goes through and what Richard was going through. The diseases can be seen as opposites in some ways — Alzheimer’s affects cognition whereas ALS attacks the body — but as they progress, both create barriers for the individual in relating to the wider world, and both demand a struggle to retain the sense of self.

Filmmaker: Many filmmakers who appeared in our first year of Filmmaker Magazine are no longer making movies. You guys are. To what do you attribute your longevity, and what things do you do to ensure that you will have continued filmmaking opportunities?

Glatzer and Westmoreland: It’s been a struggle. We were both born with plastic spoons on our mouths so don’t have much financial cushion. Our iMDbs are a testament to this — we just have to keep working day jobs to pay the bills. But we also keep our passions intact and have our projects we love, and so we quite simply charge at it, every day, like two hungry kids who just moved to the big city. After the Sundance win with Quinceañera we thought we’d hit the big time and things would get easier, but we were crawling through the desert for the next seven years looking for the next Indie-oasis. In 2011 our management dumped us and Richard was diagnosed with ALS. Ironically, that was when things started happening. We’ve made two movies back to back with Killer Films — Christine Vachon and Pam Koffler are the best producers in the business — and we got to work with some of the finest actors on the planet. If we had one piece of advice to give, it would be Never Say Die.