A Place for Research and Discovery: The Venice Film Festival 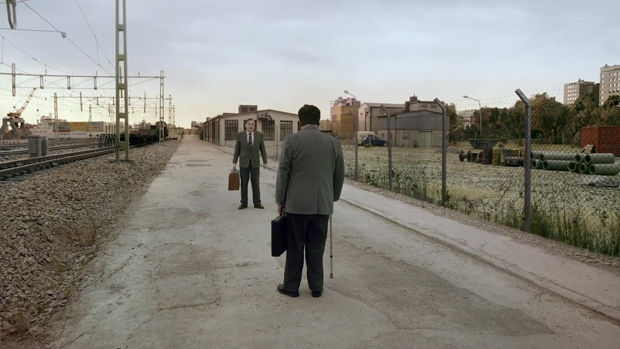 A Pigeon Sat on a Branch Reflecting on Existence

Even the rain knocked down the Lions. When a storm hit the Lido island around the central-weekend turning point, delegates could be seen gleefully snapping pictures of the overturned statues outside the Casinò, a simplistic metaphor for the Venice Film Festival’s shaky status in recent years. You’d think the bronze lions themselves would be tired of hearing stories about Toronto and the shrinking circuit space for awards-season launchpads. However, with the Toronto/Telluride battle over world premieres turning nasty and some bolder picks than usual from the NYFF, Venice director Alberto Barbera was wise to renounce the star-chasing madness and to continue his quiet rewiring of the Lido as a place for research and discovery.

If that didn’t translate to the radical, challenging selection some might have hoped for, at least it managed to secure a few high-profile titles anyway, particularly in the key opening slot. Following last year’s premiere of Gravity, the fest was once again treated to a virtuoso showing by cinematographer Emmanuel Lubezki, this time in service of Alejandro González Iñárritu’s Birdman. A feat of technical prowess as much as personal reinvention, it reveals a jazzier, looser side of Iñárritu through the story of a faded movie star (Michael Keaton) who turns to theater in search of artistic legitimacy. Remarkably, the film somehow avoids being swallowed whole by the looping meta-satire element, instead taking the plunge right alongside its ensemble of show-biz survivors, with their bruised egos and roaring regrets.

In Roy Andersson’s A Pigeon Sat on a Branch Reflecting on Existence the festival found a worthy winner — in fact, it was always the frontrunner — after a few years of left-field if not downright puzzling jury verdicts (2013’s Sacro GRA in particular). There were some exciting whispers about Pigeon being a more radical departure from Andersson’s proven formula, but for the final chapter of his “living trilogy” you can’t fault him for sticking to the template that worked so well in 2000’s Songs from the Second Floor and 2007’s You, The Living. The 37 meticulously staged vignettes are equally full of laughter, unease and wit, like a freeze-frame of a zombified world in which everyone is “happy to hear you’re doing fine.”

And yet, The Look of Silence was bound to make the life of any pigeon on the Lido rather difficult. Exemplified by Tim Roth’s heartfelt, off-book paean after the film received the Grand Jury Prize, the impact of Joshua Oppenheimer’s follow-up to The Act of Killing was massive. The Indonesian massacres are here cleverly turned from a punishing nightmare of re-enactment, with its suffocating focus entirely on the perpetrators, to an equally painful but liberating conversation that includes the victims’ side. Adi, whose older brother Ramli was brutally murdered in 1966, is seen conducting a series of informal interviews with the killers and their families, and to hear him ask his simple yet devastating questions is more than an expansion on the same topic — it’s a cathartic shift.

Nothing else in the European-skewing Competition (a paltry three non-EU/US entries out of 20) really came close, with Fatih Akin’s The Cut the most acute disappointment. Much was expected from the talented director of Head-On and The Edge of Heaven, now ready for a new career chapter and diving right into the controversy of the 1915 Armenian genocide. The pre-festival buzz teased an “epic” and a “western,” but Akin is too fascinated by the peripheral to lock onto an earnest epic. As for the western, it certainly is one — albeit in the broader sense of a warped “journey to the west” from Turkey to North Dakota that would make Tsai Ming-liang scream in horror. Tahar Ramin stars as the continent-hopping mute hero in search of his lost daughters, but around him is an awkward mesh of historical truth and mythical tale that never finds its footing.

Much to The Cut’s detriment, it was scheduled next to Far From Men, the best of four French films in competition. Adapting the Camus short story “The Guest,” director David Oelhoffen crafts a solid narrative of survival and existentialist undertones set during the early days of the Algerian war for independence. This, too, is a desert where men on opposite sides of a conflict are left to wander next to one another, but its narrow focus makes it an elegant showcase for a quintessential Viggo Mortensen role.

With David Gordon Green’s Manglehorn, Barry Levinson’s The Humbling, Andrew Niccol’s Good Kill, Peter Bogdanovich’s She’s Funny That Way and James Franco’s The Sound and the Fury all underwhelming, American cinema this year had to rely on Ramin Bahrani’s bluntly effective 99 Homes and a couple of Italian-accented joint efforts. The first, Hungry Hearts, sees Italian director Saverio Costanzo locking himself and the cast (a never-better Adam Driver and Alba Rohrwacher, who both won acting prizes) inside a Harlem apartment to incubate a claustrophobic psychological thriller out of a cute romantic flick. Costanzo possesses a bold, stylish directorial touch, even at risk of going overboard at every turn. Hungry Hearts was a small but wildly ambitious project and it certainly paid off, neatly shrinking the scope of his previous The Solitude of Prime Numbers to an intimately jagged affair.

The second is Abel Ferrara’s Pasolini, an account of the last day in the life of Italy’s most important, most controversial 20th-century intellectual voice. Predictably opposed by the local press because of all the issues it doesn’t address (can you even aim for completeness in talking about Pasolini?), Ferrara’s affectionate portrait underplays Pasolini’s last encounters with family and friends in a pitch-black, velvety 1975 Rome. Dropped in the middle of an Italian cast, Willem Dafoe is fittingly distant but capable of profound empathy. The entire film is elevated by a grace that Ferrara has only rarely summoned in his career, and his attempts to give form to Pasolini’s unfinished works are obliquely integrated into the rich texture of this hint of a biopic.

Elsewhere in the Competition, Andrey Konchalovsky’s return to scripted documentary form was enough to charm Alexander Desplat and the rest of the Jury into awarding it a Silver Lion, though The Postman’s White Nights is deceptively simple in its exploration of Russian rural communities around Lake Kenozero. Even more impressive in blurring the lines between real and fake was Ulrich Seidl’s In the Basement, looking at Austria’s creepy, unheimlich substructures and all the things — or the people — they contain.

True discoveries across the festival program were rare, and that’s probably a bigger issue going forward than any stale discussion about glitzy world premieres. Nonetheless, positive signs for the fest’s global reach came from Orizzonti winner Court, an assured, fully-formed debut by Indian director Chaitanya Tamhane, using the legal-drama framework to observe the nuances of contemporary Indian society inside and (crucially) outside of courtrooms. Fellow debutant Kaan Mujdeci nabbed a Special Jury Prize for the raw, hit-and-miss energy of Sivas, at times striking in its blend of sharp close-up framings and gloomy Anatolian vistas.

The revamped Orizzonti section had even more fresh talent on display thanks to the likes of Veronika Franz and Severin Fiala (Goodnight, Mommy), Salome Alexi (Line of Credit) and Naji Abu Nowar (Theeb), while a lively UK contingent — among them Duane Hopkins’ dour but ambitious Bypass, Guy Myhill’s The Goob, Joseph Bull and Luke Seomore’s Blood Cells — worked under the radar to maintain the Venice track record that British cinema impeccably established in recent years.