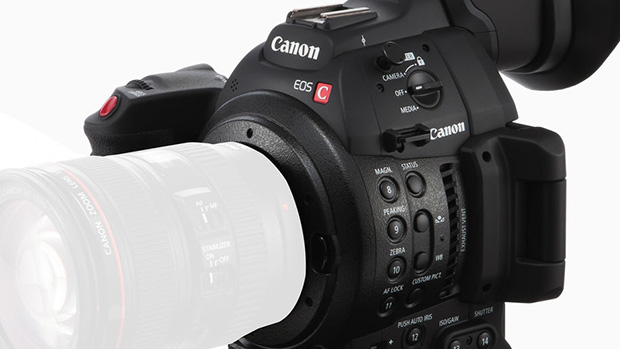 by Michael Murie
in Cinematography, Filmmaking
on Oct 24, 2014

Canon has announced a refresh of the Canon C100, and on the face of it this update fixes many of the issues found in the original model. The Dual Pixel CMOS AF function that was a paid upgrade for the original C100 is included, though it’s still limited to the center of the image area. Also new is Face-Detection AF, which will focus on off-center faces.

The EVF, which was widely panned in the first model is now larger, with a redesigned eyepiece, and it now tilts. The rear screen is now a 3.5” 1.23 megapixel OLED, with a new hinge design that can be moved to more positions and can turn 270 degrees to lie against the side of the camera. The panel also adds three buttons and a joy stick.

A small internal mic has been added to the body, making it possible to record scratch audio when not using the XLR audio inputs on the detachable handle. Built-in Wi-Fi can be used to transfer files as well as remotely control the camera using a smartphone app.

While the sensor appears to be unchanged, Canon claims that the new DIGIC DV4 image processor separates the RGB output from the camera’s 8.3 Megapixel CMOS imager into three individual 8 megapixel signals instead of 2MB signals in the C100. A new debayering algorithm minimizes moiré and reduces video noise. The ISO range (320 to 80,000) is unchanged. 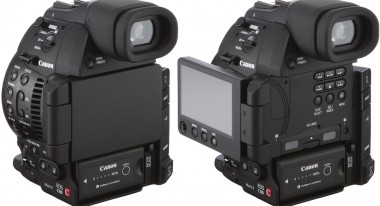 Recording is still limited to AVCHD and MP4, though the maximum bit rate has been upped to 28 Mb/s for AVCHD and 35 Mb/s for MP4. The maximum frame rate is now 59.94 fps, up from 30 fps in the original model. Like the original, you can output a 4:2:2 signal out the HDMI port.

If you’ve got a $5K-$10K camera budget (or renting in that price range), the 4K choices are about to expand rapidly. The C100 produces a phenomenal image and excels in low light, but it’s internal recording is still AVCHD, and it’s limited to HD at 60 fps.

Of course, most of these cameras aren’t shipping yet, and no one has really compared the images of these cameras to the C300/C100. As ARRI likes to point out, resolution isn’t everything, and 4K is not that useful if the dynamic range or the image is poorer. And it’s unlikely that Canon will stay out of the 4K world forever. Rumors are already circulating of a C300 upgrade in the new year that would add 4K, and they do have the $19,999 4K C500.