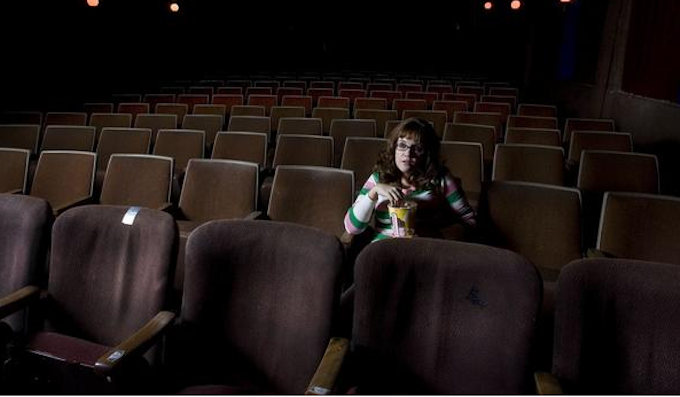 Cinephiles on both coasts were rattled by Julia Marchese’s blog post last Friday entitled “I Will Not Be Censored,” concerning her departure from Los Angeles’ beloved New Beverly Cinema. Anyone who’s been to the New Bev within the last dozen years will recognize Marchese, for many the welcoming public face of the recently beleaguered rep house. But following a steady trickle of involvement from Quentin Tarantino — first paying the theater’s bills out of love, then becoming its owner, and finally, in September, announcing he’ll be directing a majority of the programming — Marchese was isolated within the staff, and eventually demoted from general manager to working the snack bar.

In the post, Marchese explains that security cameras were being installed at the same time Tarantino announced the theater would stay 35mm only, and that she was forced to sign an all-encompassing non-disclosure agreement as part of her involvement in the New Bev — a decision that makes sense given the fracas earlier this year over Tarantino’s leaked screenplay for The Hateful Eight. Filmmaker spoke with Marchese to try and get more perspective on the matter, and about her documentary Out Of Print — which she made available free online in response to Tarantino’s consolidation of power.

Filmmaker: I see two competing exterior pressures here. One is the studios’ mad rush to ditch 35mm (which, out here, can even mean charging a repertory theater hundreds of dollars for the rights to show a paltry consumer DVD.) The other is whatever happens when 35mm is embraced by elite filmmakers with special privileges. Is it a race against time? What is, in your opinion, the sustainable option studios need to execute?

Julia Marchese: If I am talking about a dream scenario?

That’s the best idea I have come up with in thinking about this issue almost constantly for two years.

Filmmaker: Building off of that question: just how strong would you say the grassroots community (which includes big-time filmmakers, obviously) as being in its support of 35mm?

Marchese: I think it’s a strong one, but everyone is scattered.

In my experience, the little theaters aren’t talking to each other as much as they should. I think if we could get a dialogue going between all of the cinemas still showing 35mm and all of the private collectors, we would really have a vast wealth of prints and connections at our fingertips.

Filmmaker: The stated mission of the theater is repertory. Can you explain more about your concerns that the New Beverly could turn itself into a multiplex? Does this include the culture of the types of events and screenings that might be happening in the future?

Marchese: Quentin has programmed a really killer 2014. When he leaves to film The Hateful Eight, I don’t know what the programming will be like. But when I made that statement, I was talking more about the feeling of working at a multiplex.

Why get a job in a cool movie theater?

So you can work at a place where the other film geeks are, talk and absorb film, watch everything they show, have the freedom to express your ideas and thoughts, and feel like you’re part of something special.

If you are frozen out of all decisions regarding the theater, you can’t watch any of the films, or say anything publicly about where you work and are encouraged to simply scrub the bathroom…well, you might as well put on a bow tie and work at a megaplex.

Filmmaker: On paper, the decision not to use the digital projector purchased in May seemed — and still seems — like a coup for people who love 35mm. Were you involved in those discussions?

Marchese: I wasn’t. But I think Quentin’s commitment to 35mm is incredible and I am so glad he took the DCP out.

Filmmaker: Not to pry, but have your views on the situation (of 35mm at large, even) been changed in the last week? Has anybody offered you a job?

Marchese: The silver lining to this whole situation so far has been that the awesome folks at the Crest in Westwood showed Out of Print last weekend — on 35mm of course. Watching the pristine print, with a group of folks who really cared about the film made everything worthwhile.

But it’s strange — Out of Print was made to be a joyful film, celebrating a wonderful theater. Watching it now, it has an overlying air of melancholy — because the New Bev captured up on screen doesn’t exist anymore.  I think the events of the last week make it a richer film, but it was pretty painful to watch on my part.

I am open to job offers. I’m trying to cast the widest net I can, and let the chips fall where they may.

There are so many things I love to do — writing, acting, directing — I have a lot of directions I can go in, but I just want it to be something to do with movies. Because, in the end, nothing makes me happier than great cinema.

Filmmaker: Can you tell me about 35mm: whether it was easier or harder to get than you anticipated?

Marchese: I never dreamt that I would be able to shoot 35mm for Out of Print when I started the film, but Panavision donated an incredibly generous camera package, and Kodak donated several reels of 35mm film, so we shot in both digital and film, which was great. We do a side-by-side comparison in the film of the two formats as well, which really helps viewers understand the difference.

I was also lucky enough to get a 35mm print made of the film, thanks to Digineg and Fotokem. The guys at Fotokem have really gone above and beyond to insure that this print happened, and I am so grateful. I watched the print projected at the Crest in Westwood last week — the first time it had ever been shown — and it was mind meltingly gorgeous.

So to those of you out there who want to shoot on film or dream of getting a 35mm print made, I am proof that both are still very possible.

Filmmaker: Are people’s conceptions of the end of 35mm overhyped in terms of scarcity, or are they just ignorant?

Marchese: 35mm is scarce, both as a filming medium and exhibition format, to most folks. But there’s a difference between scarce and unavailable – and I think if you have a choice between showing a print and showing a digital copy, 35mm should always take precedence.