The Yes Men, Con Men and a Trans Man: What to See at DOC NYC 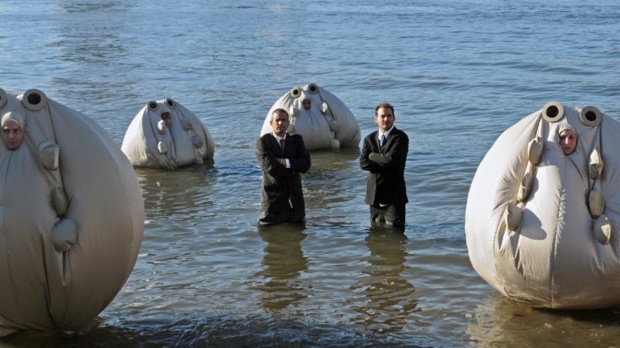 The Yes Men are Revolting

DOC NYC, Hoop Dreams, Song from the Forest, Songs for Alexis, Tales of the Grim Sleeper, The Yes Men are Revolting

DOC NYC, “America’s largest documentary festival,” certainly lives up to its billing. With a whopping 153 films and events, there’s quite a bit to navigate, from critically acclaimed historic revivals to Toronto darlings to fresh premieres. For this fifth edition several sections have been broadened, and a few themes even added. There’s now “Centerstage” (performance focused films), “Jock Docs” (sports-centric flicks), “Fight the Power” (activist docs) and, perhaps most stimulating for nonfiction geeks, “Docs Redux.” That would be a sidebar of seven oldies but goodies, most with their legendary directors – Chris Hegedus, D.A. Pennebaker and Albert Maysles, all three receiving Lifetime Achievement Awards – in attendance. Though you can’t go wrong catching any of this section’s foolproof films, this might be an especially apropos time to revisit the Oscar-snubbed Hoop Dreams. Director Steve James will be presenting his unlikely cult hit, which marks its 20th anniversary this year and has been making celebratory doc fest rounds.

Among the impressive 19 world premieres is Amy Berg’s highly anticipated study of child sexual abuse in Hollywood, An Open Secret, which will be introduced in person by the West of Memphis director. (Interestingly, Paradise Lost trilogy co-director Joe Berlinger – whose Metallica: Some Kind of Monster also screens as part of “Docs Redux” – will likewise be on the ground, which sounds like the makings for an inspired debate.) U.S. premieres include closing night’s The Yes Men Are Revolting, a film surprisingly far different in tone from the team’s 2009 The Yes Men Fix the World. Laura Nix and The Yes Men’s latest collaboration gives us a much more intimate take on the two heroic activists, delving behind the duo’s brilliant pranks into the personal lives of Andy Bichelbaum and Mike Bonanno. Indeed, a more fitting title might have been The Yes Men Grow Up as, at its heart, the film’s a fascinating look at average guys struggling to strike the right balance between relationships, kids – and, yes, SurvivaBalls.

Of the talked-about Toronto premieres, Nick Broomfield’s Tales of the Grim Sleeper is a true standout, and this is coming from someone who tired of the director’s boom mic safety blanket and bumbling Brit shtick long ago. If you didn’t catch the doc at NYFF, here’s your second chance to see it on the big screen. Beyond delving into the true crime story of a serial killer who terrorized South Central L.A. for decades, Broomfield crafts a surprisingly nuanced, sociological inquiry into the perfect storm that allowed such a killer to reign.

With the trust of the community – including, crucially, his guide Pam, a former crack addict and hooker herself – Broomfield delivers a revelatory indictment of society at large. Bottom line is, if you’re a female, African-American drug addict and sex worker you’re not merely looked down upon — much more chillingly, you simply do not exist. Your body literally is not counted, and when a community’s murder rate is already sky high, for cops a slew of “crack whore” deaths could even be viewed as helpfully cleaning up the streets. Equally unexpected, though, is that the director, like The Yes Men, seems to have also grown up, moving beyond tabloid sensationalism to paint a scary portrait of how societal indifference allows for mass murder. This could very well be Broomfield’s masterpiece.

Another look at the criminal justice system gone wrong occurs in Tiller Russell’s “Metropolis” section selection The Seven Five, about corrupt NYPD officer Michael Dowd and his crooked cohorts, a story familiar to any New Yorker who remembers the big, bad pre-Giuliani days. (Also to anyone who’s read the late Mike McAlary’s Good Cop, Bad Cop: Detective Joe Trimboli’s Heroic Pursuit of NYPD Officer Michael Dowd, which chronicles the notorious case.) Dowd was basically the 75th Precinct’s own Henry Hill, methodically moving from stealing from drug dealers, to bribery and extortion, and finally to dealing cocaine. What makes Russell’s film so shocking, though, is not that he manages to interview a surprisingly loquacious, post-prison Dowd (along with most of the players still alive, including a Dominican drug dealer who could have been an extra in Scarface). It’s that not one of the former cops of The Seven Five are sympathetic characters. Even today, they all come across as remorseless thugs who, in their hearts, still seem to believe in the Blue Wall of Silence (regardless of whether they violated their own moral code or not). Like Tales of the Grim Sleeper, Russell’s doc ultimately serves as a cautionary study of the catastrophic damage done when those in power decide it’s easier to turn a blind eye.

A number of other DOC NYC films I screened at the Hot Springs Documentary Film Festival, where I serve as director of programming, and a handful are at the opposite end of the spectrum from HBO’s Tales. These are films I consider absolute must-sees specifically because I fear that what makes them so special, so unique, also renders them difficult sells to risk-averse distributors and audiences alike. This would include Michael Obert’s mesmerizing IDFA 2013 winner Song from the Forest (screening in “Viewfinders”), which takes its title from Newark, New Jersey-raised subject Louis Sarno’s book about living with the Bayaka Pygmy clan in the Central African Republic and recording their music (and never leaving). The German director follows Sarno as he fulfills a promise he made to his teenage son Samedi – to show him the concrete jungle his father came from.

Another inclusion would be Penthouse North, which screens in “Metropolis.” When I first saw this film from Swedish director Johanna St. Michaels it immediately reminded me of Eva Mulvad’s grand, fading-Danes-in-Portugal doc The Good Life. St. Michaels leisurely spends time with the frantic, Swedish sixty-something Agneta Eckemyr, who was once a bombshell model and Playboy Playmate, and now fills her days struggling to keep her NYC penthouse overlooking Central Park. Like Mulvad’s “Danish Grey Gardens,” the film delves into the issue of identity, and what can happen if that identity is interwoven with your bank account. It also asks the very Manhattan question of whether holding onto prime real estate is worth losing one’s sanity for.

Making its North American premiere at DOC NYC, Austrian director Thomas Wirthensohn’s Homme Less is another expertly crafted knockout in the “Metropolis” section. Like Penthouse North, Wirthensohn’s subject is a former international model determined to hang on to glamorous Manhattan life even while on a fixed income. Unlike that film’s aging beauty, though, Mark Reay – still dashing and debonair in his early 50s, resembling a better-dressed Jim Jarmusch – doesn’t have the starving artist’s stress of making rent every month. That’s because this freelance fashion photographer and background actor – including in big-budget Hollywood flicks like the Men in Black franchise – gave up on keeping an apartment years ago, and now sleeps every night on a friend’s rooftop (unbeknownst to the friend). Wirthensohn’s doc spotlights a rarely seen side of urban homelessness in the 21st century, one in which A-list parties and Fashion Week can coexist with pee jugs and weatherproof tarp.

Philly-bred Dave Jannetta’s Love and Terror on the Howling Plains of Nowhere (screening in “Midnight Docs”) is closer to a slice of Americana. The pseudonymous Poe Ballantine spent six years investigating the case of a missing math teacher in Chadron, Nebraska, whose weird and violent demise shook the Twin Peaks-esque community. (Indeed, if any film screams for David Lynch to sign on as executive producer, this one is it.)

Victoria Campbell’s Monsieur le Président (world premiering in “Viewfinders”) likewise slow-burningly strips away at surface appearances. Campbell, a NYC-based visual artist who speaks fluent French, takes off to Haiti to volunteer in the wake of the 2010 earthquake. There she meets Gaston, a charismatic voodoo priest who she ends up documenting over three years as he becomes a hero to his community, opening a medical clinic with the help of a foreign investor. She considers Gaston a friend – until the unthinkable happens, wherein Campbell finds her preconceived, American notions of morality entirely upended. What makes this doc so powerful is that it’s a poetically rendered distillation of what went wrong in the aftermath of the natural disaster. Haitian filmmaker Raoul Peck’s eye-opening, eviscerating Assistance mortelle (Fatal Assistance, 2013) treaded this same territory, but from an insider’s viewpoint. (In a nutshell, every do-gooder from Bill Clinton on down condescendingly thought they knew what was needed for Haiti better than its own people – and were proven direly wrong when they met them on western terms.) The difference is that Campbell – not her protagonist – changes, matures and learns something at the end of her winding journey in an exotic land: namely that her views when it comes to righteousness and justice are not universal, nor should they necessarily be so. Often, virtuousness is just another luxury of the First World elite.

Of all the DOC NYC selections, the nearest and dearest to my heart has to be Songs for Alexis (screening in the music section “Sonic Cinema”), a film that premiered in the “Made in Denmark” sidebar at Hot Docs. With wild hair, lip ring, and T-shirts proclaiming his affinity for ’70s punk and ’80s hardcore, 18-year-old Ryan looks and acts the part of rock star in the making. He’s a talented, up-and-coming musician with a loyal following, a supportive family and a girlfriend named Alexis that he adores. He’s also a 21st century transman, out and proud, which is a problem for his 16-year-old sweetheart’s parents, who disapprove of their relationship. Yet Lind is not content with making a niche LGBT flick. The Danish director smartly dispenses with myopic depictions of gender, transitioning to deliver something much more weighty and universal. Songs for Alexis is not about gender or sexuality or any issue at all. It’s simply a gorgeously rendered, modern day, coming-of-age tale that quietly reminds us of what it feels to be young and in love. And – like the newly expanded DOC NYC – that’s progress.