At the Illumination Experience Tour with Shane Hurlbut 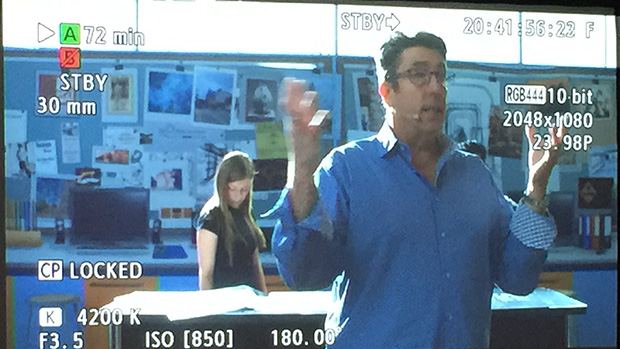 Cinematographer Shane Hurlbut has been touring the country with The Illumination Experience. This day-long workshop primarily covers lighting: how to get the best results, basic and advanced setups, and even how to do lighting on a budget. But the class also covers a lot of other material for the working cinematographer, everything from the advantages of different cameras and lenses to the correct way to hand off a C-Stand.

The class begins with a demonstration of Hurlbut’s “Pirate Death Ship,” three lights attached to a dolly on a 360 degree rail system. With an actress sitting in the middle, the dolly is moved around and the effect of moving the light can be clearly seen. The demo, which was conducted live, was enhanced by the use of a playback system that allowed the display of the live camera feed next to frames that had been captured with the light in a different position. Using this technique, Hurlbut demonstrated how the position of the light markedly changed the appearance of the actress from a flattering appearance to a rather disturbed one. 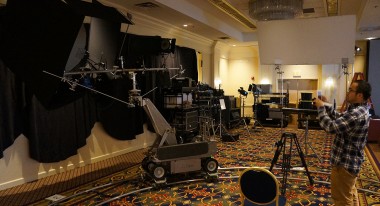 Obviously, not everyone has the budget or time to set up a 360 degree dolly light experiment, but you could easily accomplish a similar test by manually walking lights around your talent.

While demonstrating the effect of moving the key light around the subject, Hurlbut revealed one tip of his lighting: While he will use a bounce to fill in shadows, he never adds fill from the opposite side. “I never fill from the opposite side, ever. And it’s going to shock a lot of people and you basically throw out the books of lighting you’ve read. My three-point lighting never goes to three points. It stays on one side, and I’m going to show you how that’s very elegant, it’s very simple, and people can do everything without light being confusing or causing multiple shadows, and the actors feel like you’re lighting an area instead of lighting the mark.” 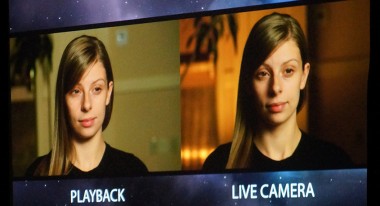 Two other major demonstrations covered recreating the lighting and camera motion for a scene from Crazy/Beautiful, and recreating a light setup for an actor that was used in The Rat Pack. The latter was then re-created using $200 worth of equipment from Home Depot.

When asked if he usually shot in a particular f-stop, Hurlbut said that he tries to shoot most in T-2, “no matter whether it’s day exterior, or day interior, or night exterior, on night interior, because I love the bokeh, the out of focus-ness, the three-dimensional quality that really separates them from the background. So 2.8 I’ll go up to if it’s action, but I like to keep it around a 2 for drama.”

He also talked about how he figures out how to shoot a scene, and the importance of identifying the key frame in a scene – the single frame/moment that defines that scene. 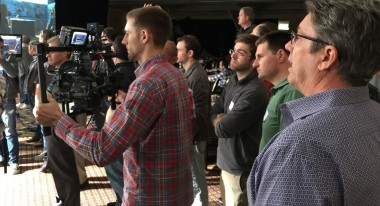 Hurlbut (right) watches as a scene is shot with the MoVI

When you’re interviewing for a movie or a commercial, he stressed that’s it’s important to come in with a point of view: “I’ve never understood why anyone would show up without being prepared, without coming in with reference books, without breaking the script down.”

Hurlbut began his career in the lighting department, and because of that he’s not afraid to get involved and physically move lights and gear around. He did acknowledge that not every cinematographer worked the same way, but that’s the way he works. Hurlbut definitely likes to get involved, whether it’s grabbing a glove to move a hot light or moving the camera to show the operator how he wants the scene to flow.

[In the video clip, Hurlbut talks about the weaknesses of the MoVI, as well as its strengths.]

At the event, Hurlbut spoke about his conception of the DP’s responsibility, which is not just to deliver a director’s vision. In a follow-up email, he elaborates, saying, “I have found that delivering a director’s vision is only 33.33 percent of the creative pie. The other 33.3 is inspiring your crew so they will go the distance and help you deliver the vision, and the final 33.3 is working with production in finding creative ways to stay on time and on budget.”

How does a D.P. do this? “The way you do this is being proactive and not just an artist,” he said at the event. “You are the gaffer, the cinematographer and the PA. You’re all those things, because you need to do all of them very well so you can motivate your whole team.”