Teen Horniness is Not a Crime: White Bird in a Blizzard 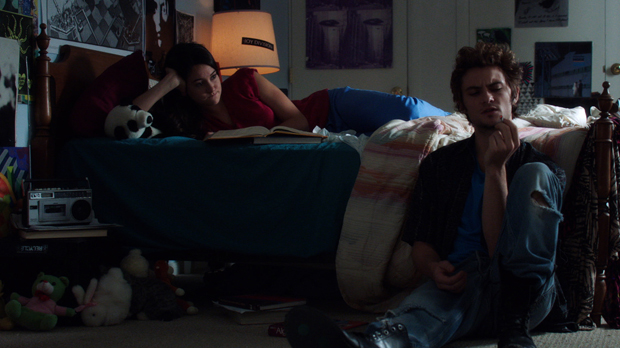 Shailene Woodley and Shiloh Fernandez in White Bird in a Blizzard

The nice thing about Gregg Araki’s movies is that he genuinely believes that teen horniness is not a crime: not for him Larry Clark’s pseudo-alarmed prurience or a Lifetime movie’s worth of dire consequences trailing teen sexuality. White Bird in a Blizzard‘s narrator/not-quite-heroine Kat Connors (Shaleine Woodley) is in the midst of an inexplicably celibate stretch in a hormonally-drenched first sexual relationship with neighbor Phil (Shiloh Fernandez) when her mother Eve (Eva Green) mysteriously disappears. Kat’s sexuality contributes neither to unearned guilt or poor decisions, and her relationship with the older investigating detective Scieziesciez (Thomas Jane) is never a source of trouble; the coming-of-age and mystery plotlines coexist, seemingly without many reverberations between the two until the very end.

Bluntly horny and adeptly self-possessed, Kat floats, mostly uncomprehendingly, through her own story until nearly the end. The storyline marches forward a few years while repeatedly flashing back to monstrous Eve, an unambiguously hatefully castrating housewife, blowsily acting out against an existence whose activities end when the house has been fully pleased. Snapping at her husband, drunkenly dancing in front of a blankly nonplussed Phil, and constantly preparing anachronistic dinners — meat loaf, crab thermidor, beef Wellington — Green’s British accent strains against her character’s American identity, as if the strain of performing “housewife” were too much. Woodley and Meloni are her calmer opposite angles in a triangle of conflict that seems to be a strictly family affair.

Robin Guthrie and Harold Budd’s understandably Cocteau Twins-esque score helps set the 1988 opening stages, Araki’s taste for richly saturated colors remains intact and the music cues, video game consoles Depeche Mode posters, and other period signifiers are as carefully chosen and spotlighted as those in Mysterious Skin. Unrevelatory bad suburban vibes are nicely written and executed, with Fernandez’s amiably dumb cheer worth special singling out. That makes the co-existence of some really unconvincing scenes of teen outcasts hanging out all the more puzzling: Woodley, Gabourey Sidibe and Mark Indelicato as a broad, token-ish gay BFF don’t jibe once as people who’ve spent years banding together against the outside world; their line readings hew closer to A Talking Cat!?! levels. With White Bird‘s central mystery mostly backgrounded, the unevenness of the main narrative thrust’s daily life segments weakens the impact considerably.

The opening vibe of haunted suburbia as seen with a pair of headphones on is very Donnie Darko, the film as a whole never less than watchably well-crafted. There’s nonetheless a feeling of watching a filmmaker return to the period pocket they’re most comfortable with, both memory-wise and when it comes to restaging it onscreen. Araki has never missed a chance to throw on This Mortal Coil, the Jesus and Mary Chain, Lush, Slowdive et al.; he’s an atemporal true believer constant in nearly all his musical reference points, which have gone from preferred cuts from recent memory to period signifiers. I’m not necessarily complaining (and, with Kaboom!, Araki discarded his usual song crutches, so it’s not like he hasn’t changed it up), but I wonder if Araki’s future holds more returns to the same late ’80s/early ’90s settings, as if only that could now justify these cues and that were the only pleasure he really could imagine for himself.

That said, White Bird pivots on a-very-late-in-the-game twist that is supposed to have you rethink the sexual dynamics of what you’ve seen and attendant assumptions made about whose characters’ experiences really matter: one conclusion you could reach is that a heterosexual edifice of incident has overshadowed and suppressed a queer narrative. The director who once smirkingly applied the knowingly inaccurate title card “a heterosexual film by Gregg Araki” to The Doom Generation isn’t playing it straight narratively or sexually. I’m not sure the entire film is recoded by that twist — issues of execution still apply — but its thorny final twist goes beyond a mere rug-pull to questions about why, exactly, this narrator and this straight POV have been foregrounded.