They Shouldn’t Have Killed his Dog: John Wick 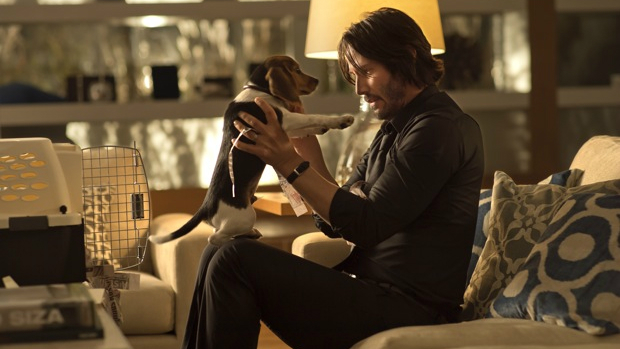 John Wick‘s primary premise is lots of well-crafted action delivered by veteran stuntpeople-turned-directors finally given free rein to make sure their work is optimally served. Co-directors David Leith and Chad Stahelski deliver on this front: it doesn’t take much time before retired hitman Wick (Keanu Reeves) is sufficiently angered to leave his New Jersey pad, head into NYC (more inferred than seen) and unleash mayhem in a hotel, club and church. No one is going to confuse 50-year-old Keanu Reeves for prime Jet Li, but he’s more than credible in walking through each point of contact and delivering body blows. The camera and editing maintain spatial coherence at all time, with no juddery shaky-cam to obscure motion.

My praise stops there. John Wick is almost totally humorless despite the presence of Michael Nyqvist as the Big Bad, doing a diluted-strength version of Christoph Waltz in manic mode. The dialogue is so functional throughout that there’s no opportunity for character actor eccentricity to bloom — there’s too much talking for the film to aspire to laconic intensity, and with fundamentally silly material stilted self-seriousness hurts. Admittedly, there’s a pleasingly whatever-works ludicrousness to Wick’s motivation for going back to the life and killing everybody: his former boss’ thug son killed his dog. Veteran Death Wish franchise viewers might remember that any/all friends or relatives of Charles Bronson’s were marked for death as the necessary excuse to get him back into action. When Wick gets a replacement pet at film’s end, it’s tempting to imagine an entire franchise that’s motivated by nothing more than the beyond-statistically-probable death of various canines, which is funny in a sick way.

John Wick is admittedly efficient, its 96-minute-with-credits running time devoid of padding. So why was I naggingly dissatisfied with it? For those left cold by the status quo man-vs-CGI-foe action norm, the recent wave of MMA DTV titles has been a corrective alternative, but there’s no way I could accept the sub-functional dialogue and plotting of Ninja II in return for its admittedly stellar setpieces, and the bone-crunching sadism of John Hyams’ also impressive, Gaspar Noe-inflected Universal Soldier installments is also something I just can’t hack with any real pleasure.

Something different is wrong with John Wick: the desire to create a mythology that’s suggestive without being tantalizing or detailed, a would-be elaborate but opaquely underrealized world. John Wick aspires to the mythological cool of Le Cercle Rouge and The Driver. The idea is to hollow out archetypal figures — the unkillable hitman, his femme fatale opponent, a maniacal gangland goon who controls the city — to their most functional levels, with the bare minimum of information necessary to advance the plot. Assassins trade gold coins instead of dollars and cents, which implies some kind of centralized mint system or one guy working serious overtime in a basement on his artisanal currency craft. There’s a hotel for assassins, which basically looks like a dingier version of the Ace Hotel, and I’d love to know how they handle municipal paperwork.

The levels of vague detail John Wick provides are counterproductive. You could strip out the coins and the hotel and basically have the same movie; the desire to add on some vaguely comic-book-y signifiers is irritating rather than tantazling. This is supposed to be the anti-Marvel Universe, a throwback to a simpler and better time, and yet the desire to build up a meaningless world can’t be suppressed; even with the CGI taken out, the trade of po-faced filler for action righteousness is still in effect.