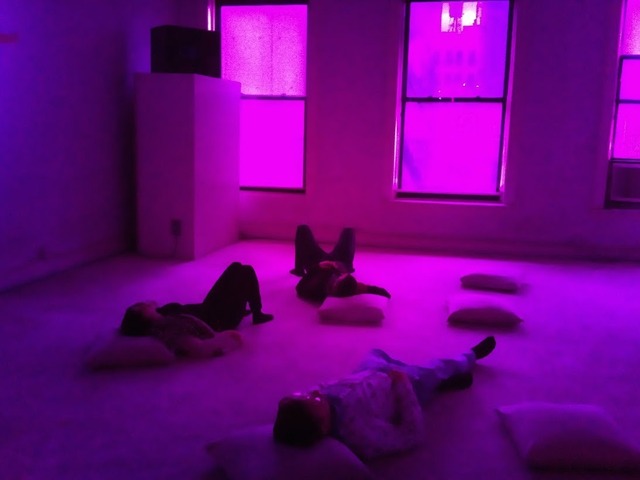 Filmmaker: What was the genesis of this project? It’s strange to think that there haven’t been many widely known omnibus web series. Why do you think that is?

Dan Schoenbrun: I’ve always been obsessed with dreams. I think there’s this strange and beautiful connection between dreams and cinema. The films that I love dearest, that I can watch a million times — Mulholland Drive, Videodrome, Sans Soleil — what’s fascinating about them is that they can take you to this half-remembered state of unconsciousness. The act of watching these films, trying to grasp and hold onto the places where they take you, it’s like trying to remember a dream that you’ve woken up from.

What this project is based on — the fantasy of being able to watch your dreams play in front of you while you’re awake — that’s something that’s always resonated with me. I think for me it’s this desire to grasp onto something completely ephemeral and fleeting. Which is kind of why a lot of filmmakers make films, right?

In terms of why we don’t see more omnibus web series, I think generally, at least as far as narrative content is concerned, there are just not too many web series out there right now trying to experiment. There’s such a focus on creating content that will garner the maximum number of clicks. Most web series aim for topicality, viral content, that sort of thing. There’s not much focus on playing with form.

Part of the genesis of this project definitely came from me thinking a lot about that, and being bummed that people weren’t taking more chances with online content.

Filmmaker: What will your role be in production? As producer?

Schoenbrun: I see my role as a ringleader. I’ve organized and will be spearheading a process that will let these filmmakers create their individual episodes with complete artistic freedom, and I’m leaving it to them to figure out the easiest and best way to do that.

Once the Kickstarter campaign is completed, I’ll split the money we raise evenly between the five filmmakers, and this’ll be the budget each works with for their individual episode. It’ll be up to them to bring their own cast, crew, and collaborators on board for their episodes. Unfortunately, because of my day job, I won’t be a full-time producer on any of the five episodes.

Of course there’s an understanding that the scope of what each filmmaker creates will be entirely dependent on just how much money they have to work with. So if we raise only 15k (or, 3k per filmmaker), the team the filmmaker will be able to bring on board will be pretty minimal, and so the episodes themselves will have to be scaled back.

The good news is that we’re working with artists who are used to creating incredible art under tight restrictions. That’s nothing new for an independent filmmaker. I’m so excited to see what they create, no matter how much we raise.

Filmmaker: Will you weigh in at all in the script phase?

Schoenbrun: I’ll be involved in the creative process as much as each filmmaker wants me to be. I love giving script notes, I love watching countless rough cuts and figuring out the best avenues into the story and tone that each filmmaker is trying to achieve. But they have final cut. They own their episodes, and they have complete freedom to adapt the dreams however they want. I trust them.

Filmmaker: Will one filmmaker relay a specific dream to another and then they’ll be responsible for adapting and directing? What will the collaborative process be like from episode to episode?

Schoenbrun: After the Kickstarter wraps, each filmmaker is going to send me a brief written recollection of a dream that they’ve had. I’m going to collect all five of these and decide who I want to adapt who’s dream. I’m planning to make some weird decisions in assigning these out, based on who I think will be most interesting to adapt each dream. I’m probably going to have a lot of fun with that part.

When I send the dreams out, the filmmakers are not going to have any idea whose they’ve received. Outside of the written dream description, it’ll be entirely up to each episode’s director to make all of the creative decisions about their adaptation. The idea is that when we eventually reconvene to watch the episodes, it’ll be the first time everyone finds out who adapted whose dream, and the first time they’re seeing their own dreams on screen. I hope it’s a surreal experience.

To answer your question about the collaborative process, we do have some cool and creative ideas about how to establish a bit of a world between all of the episodes in the series, but I hesitate to say too much. Spoilers!

Filmmaker: What is your timeline? Do you have a set amount of episodes you plan to shoot?

Schoenbrun: We’re making five episodes in the first season (though as part of our highest Kickstarter reward tier, there is an option for someone to commission an additional episode, based on a dream that they’ve had). The episodes will be produced between January and May, 2015, and we’re eying Summer 2015 for a premiere.

Filmmaker: How on earth did you decide upon these five lovely filmmakers?

Schoenbrun: Oh man, I wish I could say there was a brilliant process to it. I started by making a list of filmmakers who I knew personally, who were close by, whose work I loved and that I felt had a sort of dreaminess to it. That list ended up being pretty damn long.

From there I tried to come up with a group that would complement each other in interesting ways. These five filmmakers styles are so different, so unique, and yet their work is all united by a certain quality — a lightness and energy that I think is going to translate really well into a collected work that’s greater than the sum of its parts. I’m seriously so honored to be working with all of them, and I’m so excited to see what they can create.