How I Gained 20 Pounds and Found My Next Movie 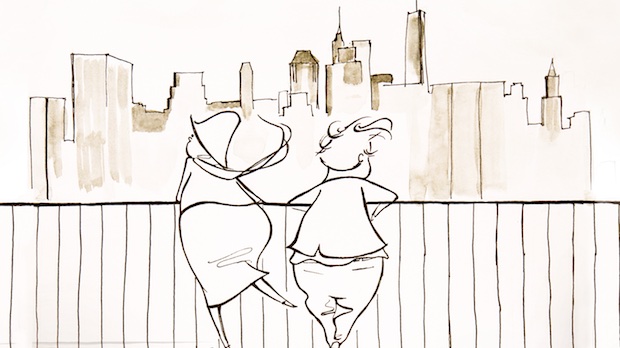 Currently on our curated Kickstarter page is Hungry for Love, a food-fueled love story directed by Justin Ambrosino. Below is a guest essay from the film’s producer, Soojin Chung, on her own journey towards the culinary when she moved to the U.S. Please visit the film’s Kickstarter page to learn more and consider donating.

Growing up in Korea, I was never interested in food. I was an unusual kid who never asked for candy or hamburgers like the other children. In fact, food was last on my list of things to obsess over. But since I moved to America things changed. I found another side of myself that I never knew existed. I became… a FOODIE!

You see, I came to the States to attend the American Film Institute. When I met my current director, Justin Ambrosino, at AFI, we found we had similar tastes in movies but different tastes in food. He cared too much about it and I too little. But Justin wasn’t the only one with a passion for food, I met many others who were the same and slowly I became a part of this movement known as foodies. Only my pants didn’t fit exactly they way they used to anymore. Well, there are probably a million reasons why but my new lust for good food was definitely one of them. It was no big deal though. I wasn’t bothered by it, until…

Two years ago, I went back to South Korea for the post-production of my previous film, Escape From Tomorrow, and reconnected with my old friends and colleagues. Shortly after our happy reunion, over Korean BBQ, everyone started recommending diets, blind dates and dying my gray hair. Suddenly, I was looked at differently. Korean people were genuinely concerned about my weight, age and my single status. All together, I became an un-ideal woman, and that’s when I realized how I am categorized in Korean society and soon I learned what that feels like.

When I went to the Korean shopping mall to buy some clothes, people gave me a quick, cold stare and yelled “WE DON’T CARRY YOUR SIZE!” I am size “Medium” in America! I knew Korean people were obsessed about their appearance, and tend to make only “one size fits all,” which would be a “small” or even “extra small” in the America, but I never knew what it felt like to be discriminated against like that. As time passed, I couldn’t wait to come back to America where I believed differences are more widely accepted.

When I came back, I told Justin about how miserable I was feeling. Quickly, he related to the stories of his childhood, in particular his mother. Justin remembered a time when he was walking with his mother, holding her hand and some older kids made fun of her – calling her a derogatory name because of her weight. She didn’t say anything, only held his hand tighter, as they quickly walked away. He was more confused then angry. Then, as he grew older, he began to feel her feelings, especially when they’d watch movies together, and the issue of weight would come up in a scene, the tension became thick in the room. When it was handled in a comedic way, making fun of her, he’d feel uncomfortable, but when it was done in a more empathetic way, his mother might laugh and so would he! Justin told me he thought nothing of his mother’s weight. He saw her as beautiful because he knows her heart is in the right place and that’s true beauty.

That’s when we came up with the idea of Hungry for Love – a heartwarming love story where food brings people together and starring a couple of non-traditional romantic leads. I think we need something to combat the overwhelming amount of beauty & fitness advertisements that preach only skinny is beautiful. So sorry, there is no “smoking hot babe” and “chiseled hunk” in Hungry for Love, instead it is just regular people, good people, who also deserve a happy ending. Almost everybody I know feels like they are struggling to get to where they want to be. Our characters are no different. We all have our fair share of ups and downs and sometimes we just needed to let it all go, to restore our strength. And that is when these two strangers meet in their lives. After having a bad day, they just want to enjoy themselves instead of feeling depressed and food is what really makes them happy, so they decide to embark on a five borough dining adventure together! Who knows? Maybe they can find hope and confidence along the way or even their soul mate – you know, someone who doesn’t judge them! And it’s all set in New York City, the microcosm of the World, where you can find every kind of cuisine just around the corner.

Currently, we are running a Kickstarter Campaign in order to reach out to our potential audience, so if you connect in any way with this story, whether you’re a foodie, chef, restauranteur, food film lover, or all of the above, please come and join our campaign to make Hungry for Love. We can not make this movie with out you!